Brazil’s Indigenous peoples are resisting capitalist attacks on their land enabled by the Bolsonaro government. As Brazil’s Supreme Court stands poised to advance these attacks, the international working class must show solidarity with the “Struggle for Life.” 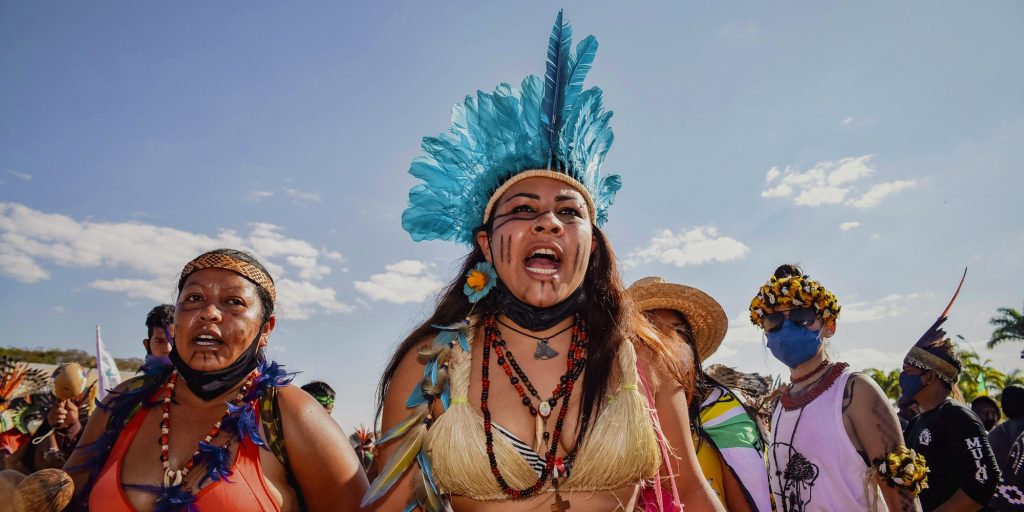 Thousands of activists from 176 Indigenous groups have mobilized and camped out in Brazil’s capital to resist a potential Federal Court ruling that threatens their land. The case in question will determine if Brazil’s government can reject  Indigenous land claims not already covered by Brazil’s 1988 constitution. However, because colonialism in Brazil had forced Indigenous peoples off their land for centuries before the constitution, the meagre protections of 1988 left out plenty of land with which Indigenous groups have a historic connection. The ruling — which is expected to come this week — may pave the way for capitalist exploitation of that land not already protected.

The protests in Brasília seek to highlight to the Brazilian people the harms their government have historically directed toward Indigenous communities. This violence was especially prominent during the years of Brazil’s military dictatorship, from 1964 to 1985. Now, far-right president Jair Bolsonaro speaks admiringly about the years of dictatorship, and is predictably escalating violence towards Indigenous communities. His government encourages attacks on Indigenous land by enabling illegal mining and murders of Indigenous people. In Bolsonaro’s first year in office, from 2018 to 2019, murders of native people doubled.

Illegal logging has also thrived under Bolsonaro. Logging, both legal and illegal, poses an immediate threat to the lives of Brazil’s Indigenous communities, while also fueling the climate crisis. Last year, deforestation in the Amazon hit a 12-year high, with massive clearing and burning of forestlands. As a result, scientists warned this year that the Amazon rainforest, one of the most important carbon sinks in the world, is now emitting more carbon than it is able to absorb.

Along with the upcoming Supreme Court case, which seeks to erase the legitimate claims of Indigenous groups to their traditional lands, the government is preparing additional legislation which could strip Indigenous land rights if the court does not succeed in legalizing Brazilian capital’s anti-Indigenous agenda.

To fight these capitalist attacks, Indigenous groups throughout Brazil have formed the Articulation of Indigenous Peoples of Brazil (APIB). APIB’s “Struggle For Life” calls on the international community to keep its eyes on their fight in Brazil and to support the mobilizations. The Stop Line 3 protests in Minnesota have already demonstrated that Biden and U.S. capital are not interested in protecting Native land in the United States, let alone internationally. The international working class, climate activists, youth, and oppressed communities in the United States must join together to support APIB’s resistance in Brazil as a struggle against injustice and for the future of humanity.