The leaders of the world’s seven most powerful nations came together on Sunday in Elmau Castle in the south of Germany. More than 5,000 anticapitalist protestors took to the streets against the G7, despite police repression. 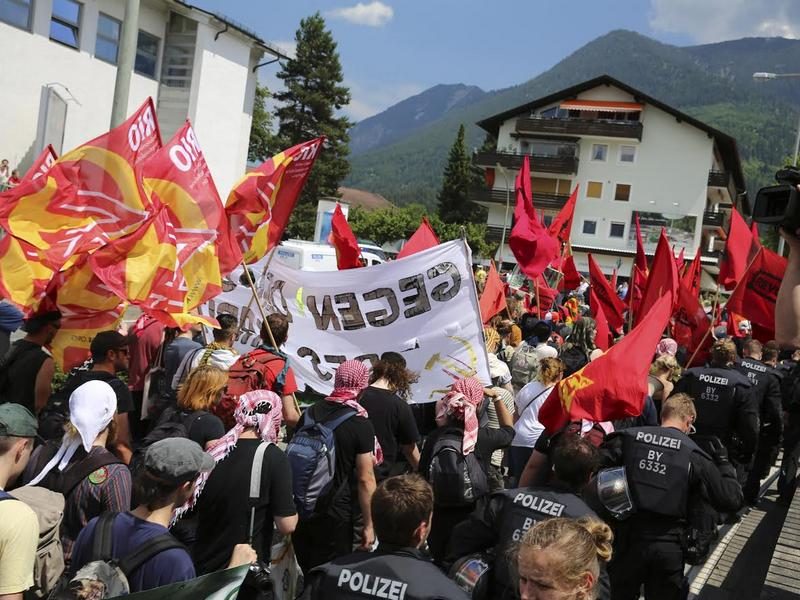 Garmisch-Patenkirchen is a small city in the Bavarian Alps, just a few kilometers north of Germany’s border with Austria. The 25,000 residents are surrounded by mountains and green fields – the kind of place where tourists go to escape from world politics.

But on Sunday, leaders of the world’s seven most powerful nations came together at the Elmau Castle, just 18 kilometers away from the town, for the G7 summit. So on Saturday Garmisch-Patenkirchen was host to more than 5,000 anticapitalist demonstrators from across Germany and Europe.

To protect the summit, the government built an 18 kilometer fence, temporarily left the Schengen zone and mobilized more than 20,000 police – the biggest police operation in the history of the Bavarian “free state”. This 24-hour meeting of seven heads of state will cost German taxpayers between 200 and 360 million euros.

The sun was burning and the thermometer was at 33 degrees Celsius as thousands of demonstrators gathered in front of the Garmisch-Patenkirchen train station. They were surrounded by an even greater number of police in black combat uniforms, with helmets, masks, batons and an endless supply of pepper spray.

Many residents of Garmisch-Patenkirchen came out to watch the “parade” with cameras and signs welcoming both protestors and police. For months, the authorities had warned them about hordes of “hooligans” and “terrorists” descending on their town, calling on farmers not to rent out their fields for a protest camp.

But the local population gave a warm welcome to the demonstrators, rejecting the police lockdown of the region. The march went on for four kilometers without incident, despite being surrounded on all sides by thousands of police. Creative forms of protest – including a giant octopus and a small army of clowns – mixed with a multitude of currents from the radical left.

During a theater performance about the G7, while many protesters were resting on the ground, the police attacked the front of the demonstration with pepper spray and batons, injuring dozens of people and sending several to the hospital. After a tense standoff, the demonstration had to turn around and return to the center of the city.

The police originally claimed that they had retaliated after being attacked “with flag poles and a bottle filled with gasoline”, but later admitted there had been no flammable material in the bottle – in other words, they attacked a peaceful demonstration after someone (allegedly) tossed a plastic bottle!

The demonstration had reached a point just a few dozen meters from the B2, the major road leading to Elmau Castle. The police were determined to prevent any blockades that would slow down the transport of thousands of translators, journalists and other workers for the summit. Additionally, they needed pictures of violence to retroactively justify the historically massive police operation.

The second the demonstrators arrived back at the center of town for a bit of a street festival, a diluvial rain began. The protest camp had to be evacuated due to the lightning, thunder and pounding rain. Only late in the evening could the activists return to their tents.

The following day, small groups of protesters were able to hike through the woods and block the highway B2. The police arrested several dozen people at different points along the road, but journalists had to be transported to the summit by helicopter.

A coalition of reformist parties and NGOs had rejected the demonstration in Garmisch-Patenkirchen and instead organized a demonstration the previous Thursday in the Bavarian capital of Munich, 100 kilometers away. Some 40,000 people attended the protest which was not directed against capitalism, imperialism and the G7, but instead against the Transatlantic Free trade agreement TTIP – with a strong ideological slant towards defending German capital against it’s US competition.

These protests against the G7 were significantly smaller than those against the G8 summit in 2007 in Heiligendamm in northern Germany. Eight years ago, 70,000 people took part in a demonstration in Rostock, while more than ten thousand joined successful blockades all around the summit hotel. This decline is partly a result of the reduced geopolitical significance of the G7/G8 compared to institutions like the G20 that include important regional powers like China. At the same time, the reformist party DIE LINKE completely boycotted the protests this year, choosing instead to hold a party congress the same weekend.

Activists from the Revolutionary Internationalist Organization (RIO), the German section of the FT-CI, participated in the demonstrations with delegations from various cities. A block together with activists of the League for the Fifth International and the youth organization Revolution called for the international unity of the working class against capitalism and imperialism. We also sent our solidarity to the workers of Amazon in Bad Hersfeld, who had been on strike on Thursday and Friday, as well as to hospital workers in Vienna who are fighting for more personell. Because only the workers with their own methods of struggles like strikes and occupations can beat the capitalist G7.