Thousands Protest Against the Right Wing and for the Right to Choose!

On Wednesday, October 29, over 3,000 people gathered in the streets of Rio de Janeiro to protest PL 5069, a law that further criminalizes abortion in Brazil. There, protesters denounced the conservative right wing and called for women’s right to abortion. 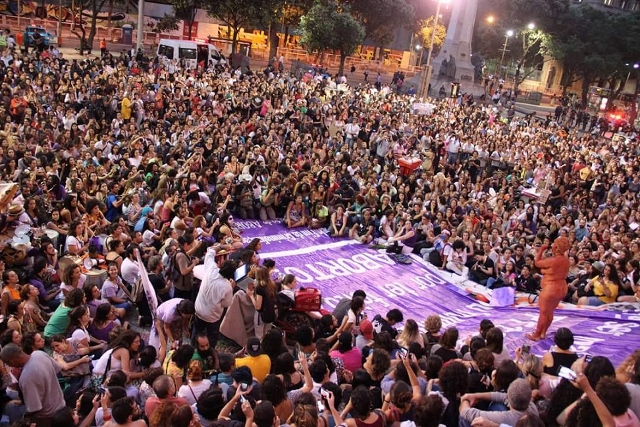 Demonstrations against the same law took place in Sao Paulo the following Friday as well. Police characteristically low-balled counts of about 5 thousand demonstrators, while activists estimated there were some 15 thousand in the street. Some women painted their bodies in red, symbolizing the women killed in illegal abortions. Others painted their bodies with the words, “My body, my choice!” Many carried banners and cans that served as drums while they marched in the streets. Protests against this law occurred in cities across the nation, putting the issue of a woman’s right to choose at the fore of political debates.

In Brazil, abortion is illegal and criminalized. Every year, 1 million Brazilian women have an abortion, with over 200 thousand hospital visits and many deaths caused by complications from illegal, dangerous, and clandestine procedures. An estimated one in five Brazilian women of childbearing age have had at least one abortion, punishable by extensive fines and up to three years in prison. Exemptions to the ban are few: if the pregnancy is a result of rape, if the fetus has anencephaly, a rare birth defect, or if the pregnancy is shown to be life-threatening.

The protests that took place last week were against a law championed by Chamber of Deputies President Eduardo Cunha, a widely-recognized spokesperson for the anti-woman right wing. PL 5069 proposes changes to existing abortion laws, making them more restrictive and repressive for women seeking abortions and those who help women access abortions. With this law, there will be jail time of six months to two years for those who help someone get an illegal abortion, without directly performing it. The new law would also require women to fill out police reports and do a rape kit, demonstrating “proof” of rape.

Furthermore, the new law will severely restrict women’s access to the morning after pill by criminalizing anyone who provides or sells substances that can provoke a miscarriage. This statute leaves the door open for right-wing conservatives to place the morning after pill in this category, thereby making it illegal.

Lastly, the law empowers medical professionals to refuse to perform or assist women with abortions if it conflicts with their moral beliefs. This practice already occurs today, a woman is unable to obtain a legal abortion simply because the doctor at the SUS (public clinic) won’t do it. The law may even allow pharmacists the right to refuse to give women the morning after pill, if it “goes against their morals.”

This law, though primarily popularized by right wing figure Eduardo Cunha, was co-written by several key people, including officials from the Workers Party (PT). In fact, the supposedly “progressive” Workers Party has steered the government for twelve years, but has not taken a single step towards legalizing abortion. Instead, the PT opts to remain silent on the topic while thousands of women die every year by having illegal and unsafe abortions.

Despite the PT’s inarguable role, the recent protests singled out Cunha, the right wing, and PL 5069, ignoring all other political parties’ participation in signing the law. Most importantly, the vast majority of demonstrations did little to point out the PT’s role and its alliance with the right wing built on the refusal to protect women’s lives.

Many feminists argue that women must support President Dilma, Brazil’s first female president. Others argue that President Dilma must be protected from right wing attacks, without noticing that the “right wing” was in alliance with the PT for most of their time in government.

Pao e Rosas (Bread and Roses), an international Trotskyist women’s group, argues that the responsibility for this reactionary law lies not only with the right wing, but also with the PT, for their years of making alliances with the right wing, for refusing to advance pro-choice initiatives, and for allowing a member of their own party to support the law! The case of Dilma shows us the shortcomings of a politics that garners support based solely on identity; it shows that the presence of a woman in the nation’s highest office does not mean steps will be taken towards equality and liberation for women.

Solely speaking against the right wing saves the PT government from any rightful criticism. It shifts the attention away from the party currently in power to the easy target, right-wing boogieman Cunha. At protests in several cities, Pao e Rosas was the only group that combined criticism of the PT with denouncements of Cunha, holding banners that read, “Down with PL 5069! 12 Years of PT and no advance in women’s right to abortion. Legal, safe and free abortions.”

At the protests across the country, women chanted against Cunha and called for the right to choose. Cunha may indeed, be taken out of power. However, women must be equipped to fight against all those who stand in the way of our rights– the right wing as well as the Workers Party.