Mass demonstrations have exploded in Poland over abortion restrictions and the conservative policies of the government and the Catholic Church. 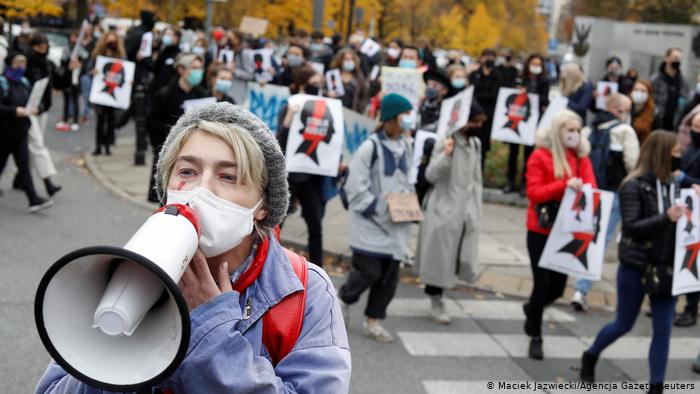 Defying Coronavirus restrictions, protests have increased across Poland to demand the reversal of the Constitutional Court’s ruling last Thursday which imposed an near-total ban on abortion.

It has been a week of demonstrations, with protesters blocking roads and actions spreading even to smaller Polish towns. Activists are called for a women’s strike today. “We are not going to go to work, nor to school, nor to university … We have to stop this Poland for a while and build a new one,” announced activist Marta Lempart, head of the Women’s Strike collective that is leading the protests. Today, thousands of people walked off the job and thousands of students walked out of class to join the mass actions.

The church has been a focus for the protesters, as the Catholic Church maintains an enormous influence over the state and the governing right-wing Law and Justice party. Activists have disrupted church services, many of them dressed as the red-robed characters from “The Handmaid’s Tale.” Some of the activists carried posters depicting a pregnant woman being crucified and others sprayed the exterior walls of churches with graffiti of the popular “#Women’sHell” slogan. On Sunday night, tension rose as Catholic nationalist groups threatened to attack the marches.

The protests followed a court ruling that virtually banned abortion in Poland, a country, that  already had one of the most restrictive abortion laws in Europe. Last year, only around 1,100 legal abortions were performed in Poland, but Lempart estimates that up to 150,000 were performed illegally or across borders. Abortion will now only be permitted in cases of rape, incest, or threats to the life of the mother. Such cases represent only 2 percent of abortions, effectively rendering abortion completely illegal. The ruling also prohibits abortion in the case of fetal abnormalities.

The protests have become increasingly widespread, as demonstrators across sectors express their discontent against the conservative Catholic government. In the words of Lempart, “Now it’s not about abortion alone, it’s about freedom in general and abortion has become a symbol of it.” Protesters are not only demanding the reversal of the court’s ruling. They want to make abortion more accessible. Although the demonstrations were initially concentrated in the cities, they have now spread to traditionally conservative towns and villages. Feminists have found support from diverse sectors: taxi drivers, farmers, and coal miners are among those who have joined the protests, speaking out against the draconian anti-abortion law and to express their own grievances against the government.

Demonstrators have been met with violent police repression. In the capital of Warsaw, riot police arrested and fined many protesters. Police have also deployed teargas, including in clashes in the southern city of Katowice.

Feminists have mobilized with banners that read: “Enough!”, “This is hell for women” and “I want choice, not terror.” Piotr Wybanski, a protester, said, “I don’t care if it means a week, a month, three months or three years. I will be here until the end.”

Other banners, aimed at the government and judges, said: “Your hands are stained with blood” and “Fight the virus, not women.” Poland currently has one of the highest rates of coronavirus infections in Europe, reporting a record number of cases and deaths while hospitals face devastating shortages.

Of course, the recent abortion ruling does not mean that the number of abortions will decrease. Many women in Poland are already forced to travel to other European countries to have abortions. Or, as in much of the world, thousands of abortions will continue to be performed clandestinely, putting people’s lives at serious risk. This is particularly the case for working-class women, for whom legal abortions, particularly those performed abroad, are particularly out of reach. We must demand the right to safe, legal abortion around the world.