Time to Take Back Our Universities: Temple University Fights for a Fair Contract

Temple University faculty, students and staff members made their voices heard for higher wages and better working conditions, in defense of education. 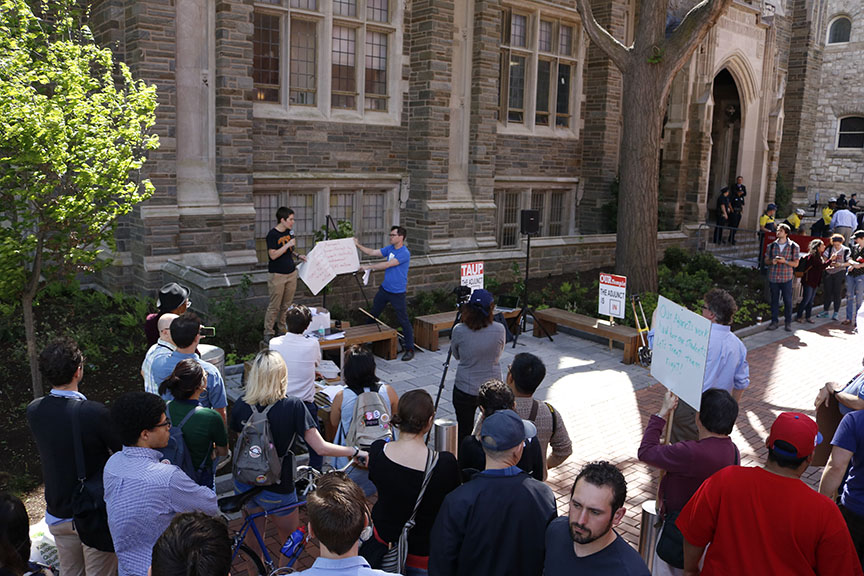 On May 2, The Temple Association of University Professionals (TAUP) at Temple University held a Rally to Defend ALL Faculty, Librarians and Academic Professionals outside a meeting of the Board of Trustees. There was a strong show of support from faculty, student activists, community organizers, and representatives from other unions, including TUNHA (Temple University Hospital Nurses Association) and the adjunct union at Arcadia University. The Stadium Stompers were there as well with a banner protesting the plan to build a new football stadium, which would not only allow Temple to make further incursions into the North Philadelphia neighborhood and contribute to a worsening of the relationship between the university and the residents but also continue the colossal misdirection of the university’s resources away from education and toward for-profit projects.

“Who makes Temple work? We do!” This slogan expressed the fact that it is faculty, librarians, staff, and students who realize the mission of the university – while being treated abysmally. Adjunct instructors carry a particularly heavy burden; they make up 51% of the faculty, and half of them are paid a meager wage of $3900 per course. Adjuncts receive no benefits and often struggle to feed themselves and their families. Sara Goldrick Rab, one of the speakers at the rally and Professor of Higher Education Policy & Sociology at Temple University, noted that 1 out of 4 adjuncts suffer from food insecurity. Even though Temple’s 1400 adjunct professors joined TAUP in November 2015, after a two-year battle, the university has continued to sabotage bargaining for a fair contract, making absurd offers of a less than 3% raise, which amounts to a little more than $6 more a week. This is a bad faith effort by the administration to take seriously the vital role of the university’s teachers and shows that they do not value their labor.

Where there is money for a new stadium, there is money for instructors. Temple University made a profit of $158 million dollars just last year. This money could easily be used to satisfy the wage demands put forth by the adjuncts, which amount to a total of $4 million. Even if all the demands were met, it would only cost the university $10 million, which is ultimately a fraction of what the university has raked in through tuition mostly, another problem that that students and faculty have to unite to fight against: escalating student debt.

The struggle continues as the current union contract expires in 2018. Non-tenure track full-time faculty (NTT’s) are also in dire need of better working conditions, as many of them are on one-year contracts, are poorly paid, and have little or no say in university governance. As the speakers at the rally made clear, these are conditions of austerity, and if the situation continues, everybody will continue to suffer – including first and foremost the teachers and students but also education as a whole and even the reputation of Temple University as an institution. With so much at stake – the lives of workers, the learning experience and future prospects of students, the North Philadelphia community – Temple will need to start to listen. Educators and all university employees must stand together and fight, at Temple and across the country, to take back our universities.