Too Little, Too Late: Firing Pantaleo is Not Enough

Eric Garner was killed by policeman Daniel Pantaleo five years ago. Yesterday Pantaleo was fired from the police force. While this is a result of protests, it is too little, too late. 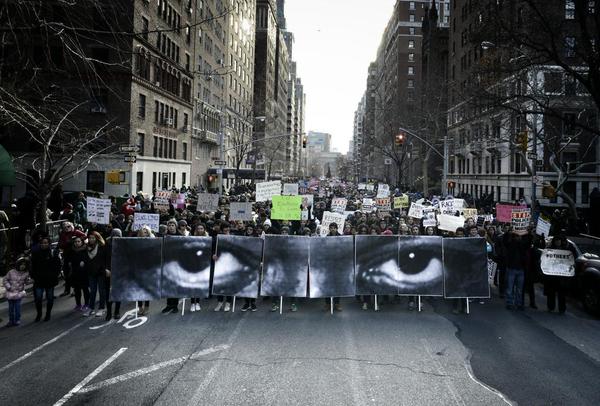 On July 17, 2014, Eric Garner—a 44-year-old father of six—was killed by New York City police officers on Staten Island for the supposed crime of selling loose cigarettes on the street. Video of the incident shows that when approached, Garner complained of harassment and asked to be left alone, but was instead tackled and pinned to the ground by several officers. He later died of complications brought on by a chokehold employed by one of the officers, Daniel Pantaleo—at the time an eight year veteran of the New York Police Department (NYPD). While Garner’s family mourned their loss, his killer was allowed to remain on full pay and desk duty along with the other officers involved.

For five years Eric Garner’s family grieved and agitated for some kind of justice. For five years, people across the country rose up to denounce the killing and the many others that followed, insisting that “Black Lives Matter.” And for five years Pantaleo continued to work for the NYPD, regularly earning as much as $120,000 a year with overtime pay, without ever having to face a judge or jury.

This is how much Black lives matter in America: The murder of a Black man by the police was caught on tape and hundreds of thousands mobilized in the U.S. and around the world, but the murderer was never charged with a crime nor did he even lose his job. This has been the case with essentially every police officer who was involved in a high profile murder of a Black person: they are usually not indicted and are essentially never convicted. Many, like Pantaleo, continue to work on the police force. So this isn’t about just Panteleo or a few bad cops: this case highlights the racism of the entire system and the complete impunity with which the police function.

The inequality is staggering. Black folks get decades in prison for non-violent drug offenses. The “justice” system locks them up and throws away the key on flimsy evidence. Pantaleo was on tape, murdering Eric Garner, and he didn’t go to jail. Meanwhile, as a friend of mine put it on Facebook, “the only person to see the inside of a prison cell is the guy who took the video,” referring to Ramsey Orta, an acquaintance of Garner’s who filmed the incident. Orta was hounded and harassed by police for two years because of his involvement, and eventually arrested on trumped-up weapons charges in 2016. He is now serving the end of a four year prison sentence.

Working class people are unjustly fired from their jobs all the time: as every working parent knows, a sick child and too many days calling out might mean termination. But cops aren’t part of the working class. Pantaleo wasn’t fired. Institution after institution claimed that nothing wrong had happened, that no action needed to be taken, that the murder of Black men by cops should go entirely without punishment.

Yesterday, that changed. In the wake of a series of high-profile protests—including disruptive demonstrations aimed at NYC mayor Bill de Blasio at the Democratic Party primary debates in July, and a new internal police investigation into the incident—Pantaleo was officially fired without severance or full pension. The move comes only weeks after the new investigation was launched by department officials and just a little more than thirty days after Trump-appointed Attorney General William Barr declined to bring federal civil rights charges against Pantaleo for the killing.

The news was met with a combination of measured relief and defiance from the Garner family and activists who had been fighting for Pantaleo’s dismissal. Garner’s mother, Gwen Carr, determinedly asserted that she would not stop the fight to get justice for her son and to end police brutality. And the Reverend Al Sharpton, standing beside Garner’s family, said that there was “nothing to celebrate,” and that the decision had come “five years too late, and [had caused] five years of pain and misery that will never end for this family.”

But of course, as Garner’s mother made clear when she said: “You may have lost your job, but I lost a son,” this is far too little, far too late. Eric Garner’s daughter, Erica, for instance, died without having seen Panteleo suffer a single reprimand or consequence for her father’s murder. And the fact that his firing comes a full five years after the incident shows how well killer cops like Pantaleo are protected from prosecution by the legal system, their fellow officers, and the Police Benevolent Association, which came out yesterday to denounce the decision. The whole system is guilty.

“The unintended consequence of Mr. Garner’s death must have a consequence of its own.” Of course this magical and sudden “clarity” which comes five years delayed has everything to do with mobilizations, public call outs and DeBlasio’s attempt to paint himself as a progressive for his 2020 electoral run.

And although Commissioner O’Neill would like us to believe that the killing of Eric Garner was an accident caused by negligence or misconduct, the fact is that his death was not so much “unintended” as it was the product of a system that is designed to unleash violence on the poor and people of color.

While the faces may change, people like Garner have always been the chosen targets of a form of police violence that can’t ultimately be separated from the larger violence of the state. Garner’s death then was not “unintended” but was the result of a series of conscious actions taken by Pantaleo—actions that were influenced and informed by years of experience working within and for a racist and oppressive institution. Pantaleo killed Eric Garner and as such he deserves to be held accountable for that death and being fired five years after the fact is obviously insufficient.

That said, it would be folly to act as though punishing Pantaleo, or other individual officers like him, is any kind of solution to the problem of police violence and the historical epidemic of police murders and lynchings they have perpetrated over the decades. Like the cops who murdered Amidou Diallo, Michael Brown, Stephon Clark, Sandra Bland and Tamir Rice, Pantaleo was merely “following orders.” His crime began the minute he decided to become a New York City Police Officer because there is no such thing as a good cop. The idealistic young men and women who join the police department with the idea that they are going to somehow become a force for good are quickly transformed, whether they realize it or not, into little more than agents of the state, whose job is not to protect the innocent or keep the peace, but to protect private property and manage and contain those populations that are most exploited and oppressed.

Eric Garner was killed by Pantaleo—that is without dispute—but he was also a victim of the fundamental underlying violence and racism inherent to capitalism: a system whose very existence depends upon the marginalization of whole swaths of the population, especially people of color, to be kept as what Marx and Engels called “a reserve army of labor.” The police—which in the U.S. were formed, in part to help in the apprehension of runaway slaves—are but one of the mechanisms used to monitor and control this reserve army of the unemployed and underemployed, and are thus irredeemable. It is good that Pantaleo was fired. His dismissal shows the power of protest and could make other cops think twice before using deadly force, but Eric Garner and his family deserve more. In fact all working class and oppressed people do.