Towards a New Phase in the Global Scenario

Although Trump has not been able to push forward key aspect of his program, he still demonstrates a significant change in global politics. 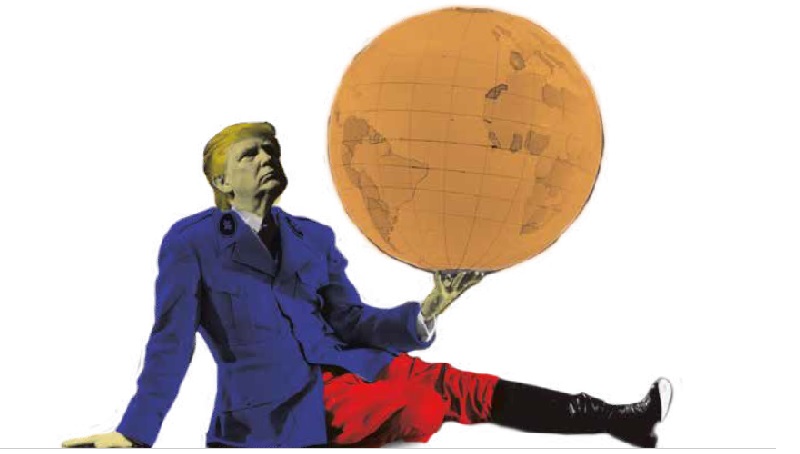 Given the unexpected victory of Donald Trump, the Trotskyist Fraction organized an emergency conference in Buenos Aires, Argentina in March of 2017. The X International Conference of the Trotskyist Fraction took place in August, but due to the Trump win, the international decided to meet to discuss new definitions about the shifting international situation. Representatives from Argentina, France, Chile, Brazil, México, United States, Spanish State, Germany, Bolivia, Venezuela and Uruguay attended. The conference began by discussing Trump’s victory and its global implications. Afterwards, representatives discussed the specific political situation in each country and the challenges ahead for each group.

The following text summarizes some of the primary definitions and resolutions voted at the meeting of the Trotskyist Fraction. It is the first of several parts.

The proliferation of right-wing nationalisms and, in particular, Donald Trump’s rise to the highest position of global power, implies a significant change with respect to the previous scenario and indicates the beginning of a new period, characterized by tendencies towards economic nationalism (which tend to clash with the deeply globalized structure of present-day capitalism), unstable alliances, greater disputes and rivalries between world powers, and trade wars as well as military conflicts in which they become involved. The civil war in Syria could be a preview of this.

In this article we present some conclusions debated in the meeting of the Trotskyist Fraction for the Fourth International held in March of this year. This brief summary is not a comprehensive presentation of the discussion, but is intended to serve as a concise “update” of the Manifesto for a Movement for the International of the Socialist Revolution (Fourth International) that we published in 2013.

The International Prospects Created by the “Trump Effect”

Trump’s international policy is a departure from the policies of neoliberal and globalizing governments – both conservative and social democratic – that predominated throughout the phase of neoliberal restoration, although the magnitude of this departure is still unknown.

Trump’s government, Brexit, and the surge of eurosceptic parties in Western Europe – although they do not yet propose open and consolidated protectionism, but imply partial reversals of the hegemonic globalizing trends of the past decades – are a clear expression of the end of the cycle of the supposed “harmonious globalization” that structured inter-state relations in the past few decades and that became hegemonic following the capitalist restoration first in the former USSR and then in China. As the leader of this neoliberal order, the United States obtained the greatest benefits for its monopolies, but also allowed the largest economies to secure their share. The capitalist crisis of 2008 and its continuation throughout years of low growth rates alternating with trends towards recession are undermining the foundations of this structure.

Trump’s economic nationalism in no way means a retreat from global trade but is, on the contrary, an aggressive imperialist reaffirmation of the national interests of US capital, primarily on a commercial level.

In relation to foreign policy, Trump’s plan was to put an end to the more aggressive policies towards Russia, implemented by the previous Democratic and Republican administrations as a political expression of the sector of the bourgeoisie that sees the need to divide the sphere of Russia’s influence and advance towards its semi-colonization. Hillary Clinton expressed continuity and progress in this direction. However, it would be a mistake to consider Trump an isolationist. As shown to a great extent by his alliance with the military sector (and the significant increase in military spending), his policy is to prepare the country strategically to continue prevailing at the nuclear level (for example, he intends to eliminate the small advantage that Russia has over the US in number of nuclear warheads) and intervene wherever US interests are at stake.

Although there is still little clarity regarding his foreign policy strategy, his strategy towards Russia has been met with active resistance both internally as well as from Washington’s traditional allies. The most dangerous aspect of this for the international situation is that US leadership has become unpredictable, and this increases the probability of contingencies that heighten tensions, at a minimum, or could even lead to conflicts of a significant magnitude. The crisis taking place in the Korean peninsula is an example of this.

If the trends towards reactionary nationalism within the world powers build up and intensify, this could lead to the surge of defensive nationalisms in the semi-colonial world, which could result in anti-imperialist phenomena in the latter case. Mexico seems to be an early example of this, as it is currently in the eye of the storm of Trump’s attacks.

Trump’s arrival in the White House is not a freak accident. The historic capitalist crisis that broke out in 2008 has been the driving force behind trends towards what Antonio Gramsci called “organic crises,” either as initial tendencies in various central countries or more openly in important semi-colonial and peripheral countries like Brazil or Mexico. These are structural and global crises that expose profound contradictions that cannot be resolved by the ruling classes by their usual methods of political domination, initiating a period of profound uncertainty and disaffection among significant sectors of the exploited classes with the traditional parties in their different variations.

On an international level, a new phase has begun that is characterized by the intensification of trends towards an “organic crisis” both in central countries as well as in the periphery, and with it the emergence of “freak phenomena” and the implementation of “solutions involving force” by the bourgeoisie, which are expressed as Caesarist or Bonapartist trends and that will ultimately be resolved one way or another in the sphere of class struggle. These trends are already developing with nationalist variations in central countries, evidently including Trump himself, but also the advance of the National Front in France and that of extreme eurosceptic, xenophobic, and anti-immigrant right-wing parties.

In addition, political phenomena to the left the of traditional parties have emerged, leading to the development of “neo-reformist” organizations such as Syriza in Greece or Podemos in the Spanish State, phenomena such as the emergence of Jeremy Corbyn in the British Labour Party or Bernie Sanders in the US primaries. The Greek coalition, Syriza, the only one that has come to lead a national government, has shown its political bankruptcy in a matter of months and is now charged with implementing the Troika’s austerity and privatization plans while attempting to appease the masses. More recently in Germany, a new attempt at a “progressive” recycling of the old Social Democratic Party (SPD) seems to be taking place under the leadership of Martin Schulz.

In the United States itself, Trump has unleashed a strong protest movement, which, although it is influenced by the Democratic Party and, in general terms, may be capitalized by an “anti-Trump” popular front, creates new possibilities for the emergence of progressive phenomena in politics and class struggle. The growth of left activism in the US is symptomatic and, albeit not politically radicalized, it is a phenomenon that the world has not seen since the Vietnam War. The anti-worker, anti-union, and anti-immigrant nature of the government, its support for the violent police force, the main victim of which are African Americans, could lead to the emergence of class struggles in the context of profound divisions within the ruling class and the state apparatus, which could converge with this process initiated by the poor youth, students’ movement, and minorities. The struggle for the working class to adopt a program against all forms of oppression and attacks against the masses is essential to an independent and hegemonic strategy opposed to those who intend to lead these struggles behind a capitalist party.

An important development has been the emergence of a progressive women’s movement, which is the only global movement today, as shown by the massive rallies on March 8 (2017), with a general strike in certain countries like Uruguay. This is a phenomenon that has been developing throughout the past few years in semi-colonial and imperialist countries, as we have seen with #NiUnaMenos in Argentina, the women’s movement that carried out strikes in Poland, and the women’s march that was the first mass mobilization against Trump the day after his inauguration.

More in general, the new phase that began with Trump’s inauguration (the consequences of which have yet to be defined, both in magnitude and pace), in addition to the heightened processes of organic crisis and development of political phenomena, opens up the possibility of leaps in the mass movement’s responses, either against more direct attacks or emerging in the context of inter-capitalist confrontations that create possibilities for the independent action of the proletariat and the exploited masses, as seems to be the case in Brazil and South Korea. The organic crises could lead to more classic situations of confrontation between revolution and counter-revolution.

A Heightened Need for Internationalism and Anti-Imperialism

The reactionary nationalism, xenophobia, and chauvinism of the imperialist powers are trends in the global situation that are here to stay. Now, more than ever, we must raise the banners of anti-imperialism and proletarian internationalism.

For example, in Mexico and the US we must organize a common struggle of the workers and the people on both sides of the border, in defense of their immigrant brothers and against Mexico’s exploitation by multinational corporations. In imperialist countries, it is also essential to demand the waiver of the foreign debts of oppressed countries, in semi-colonies, but also in countries that are not formally semi-colonies, but in which the working masses and the people bear the heavy yoke of massive debt, such as in Greece. With these examples, we wish to point out that, unlike liberal-democratic progressives, we believe that the necessary solidarity against the persecution of immigrants is not enough and that we also need to fight against the foundations of imperialist oppression.