Trade Treaty: A New Pact of Subordination of Mexico to the U.S. 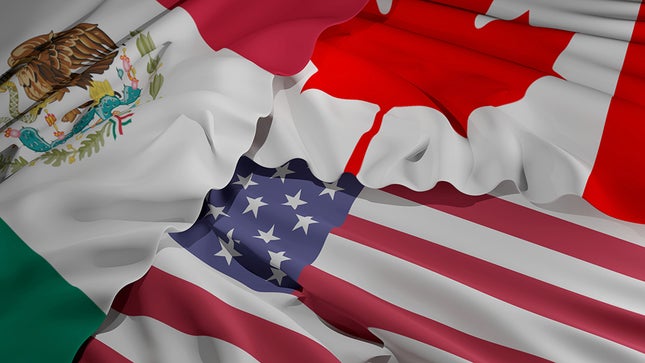 The negotiations proceeded like a thriller, as representatives from multinational corporations and business members from the three member countries gathered in Mexico City to hash out the details of an agreement that has been more than two years in the making. With President Trump’s recurrent threats to hanging in the air, delegations from Canada, United States, and Mexico finally agreed to a revised version of the trade treaty intended to update the notorious North American Free Trade Agreement (NAFTA), which Trump has long claimed is bad for U.S business.

It was expected that the agreement would have been ratified in the congresses of the partner countries before December 20, since there was a rush to close the agreement before the beginning of 2020 election year in the US. By January 3, only Mexico has ratified the agreement.

“We have reached the best trade agreement in history,” said Robert Lighthizer, the U.S. leader of the negotiations. The official praised Mexican President Andrés Manuel López Obrador for signing the treaty changes. This is a dubious honor for the president who, time and again, demands ‘respect’ and ‘friendship’ from the U.S. while performing a succession of servile gestures in the face of Trump’s threats and insults.

Major changes of the deal include modifying the rules of origin for the automotive industry, changing labor standards, and giving advantage to US multinational agricultural interests. After the ratification of the USMCA 70% of steel, aluminum, and glass for automobiles must originate in North America, meaning Mexican automakers cannot rely on cheaper parts from East Asia. Additionally, labor reforms must be implemented in Mexico that will facilitate layoffs and encourage “protection contracts,” which are labor contracts set up by sham labor unions under the control of employers that depress wages. Different sources estimate that between 80 and 90% of collective bargaining agreements in Mexico are protection contracts.

Slow growth adds to the climate of unease for governments and entrepreneurs. Such slow growth is often the result of trade disputes, the fiercest of which is with China, spurred on by the tycoon president of the United States Donald Trump.

The agreement between the Democratic and Republican parties was key to the signing of the final version of the USMCA, the full content of which has not yet been made public. The bipartisan support for the agreement was demonstrated on December 19 in the House of Representative with 385 votes in favor to 41 against.

Trump is also strengthened by his image as a shark negotiator who managed to improve upon NAFTA so that imperialism advances in the exploitation and plundering of the region.

On the Mexican side, and even in the international arena, López Obrador is solidifying himself as the guarantor of Mexico’s subordination to U.S. imperialism and the interests of big business. He confirms the role of Mexico as the “border patrol” against Central American migrants, now extending this role to the economic sphere.

Some of the losers in this game are the makers of auto parts and automobiles. However, the truth is that for decades they enjoyed tax advantages and exploitation of labor in Mexico.

But the ones who definitely bear the brunt are the workers of North America: there is a risk that in the U.S. the bosses will try to push down the salaries of the automotive sector, which now average $32 an hour, towards the new wage floor of $16. In Mexico, the new labor reform opens the door to state interference in the unions, and the makers of auto parts and automobiles will try to burden the working class with the cost of the new rules of the USMCA with layoffs, technical stoppages and precarization of labor.

Likewise, the small producers of the Mexican countryside—communal subsistence farmers and rural communities—will face a new avalanche of U.S. agricultural products, many of which are produced by migrant day laborers. A new wave of forced displacement of families may occur in the face of their inability to continue making a livelihood through agriculture and small-scale livestock farming.

However, the memory of the struggle of the working class is fresh. In the maquiladoras of Matamoros in the state of Tamaulipas workers organized for a 20% wage increase and a bonus of 32,000 Mexican pesos. Workers at General Motors in the U.S. stopped production at 34 plants for 40 days, an action which received solidarity from their Mexican comrades as well as other countries abroad.

In the face of the imminent ratification of the USMCA, the working class in North America needs to overcome the divisions created by governments and their institutions and retake the path opened by international solidarity between U.S. and Mexican workers, as in the case of General Motors. Only in this way will it be possible to confront the coming attacks and fight for the ideal of regional integration centered on the needs of the working class and popular sectors of Mexico, the United States and Canada; the United Socialist States of North America.