Trans Rights Under Attack In Massachusetts

In November, Massachusetts residents will vote in a referendum on trans people’s rights to not be discriminated against in public accomodations. 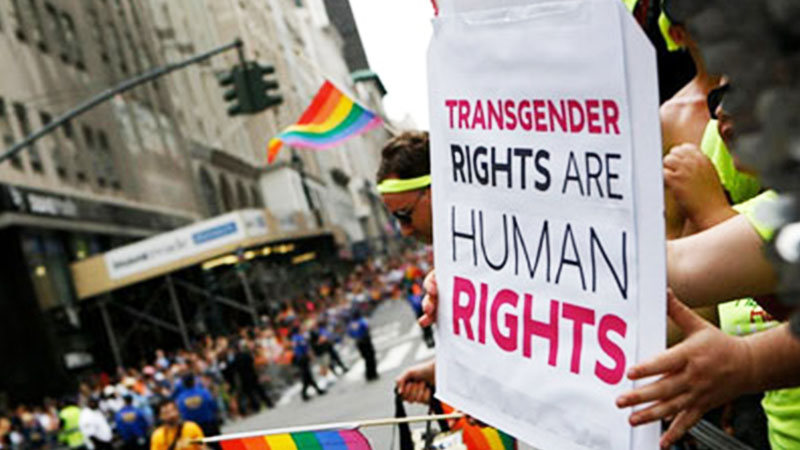 Transgender people’s right to safely use public accommodations in Massachusetts could end this November, if an existing law is not upheld in a veto referendum called Question 3. The law—SB 2407, passed in July 2016—prohibits discrimination based on gender identity at places such as stores, restaurants and cinemas, as well as hospitals, medical offices and libraries. Question 3 will either uphold this law (a yes vote) or repeal it (no vote). Massachusetts state law defines gender identity as “gender-related identity, appearance, or behavior regardless of whether or not that gender-related identity, appearance or behavior is different from that traditionally associated with the person’s physiology or assigned sex at birth.” This is the first time that trans rights have been put to a popular vote at the state level in the United States. SB 2407 was also the first state law to specifically and exclusively protect trans people’s right to public accommodation. A previous nondiscrimination law passed in 2011 had included protections for public accommodations along with housing and employment, but the public accommodations provision was removed before the bill passed.

No federal laws explicitly protect trans people’s right to access public accommodations, or even from employment and housing discrimination, though some court decisions have held that federal protections against sex discrimination do include trans people. Many trans people have experienced hostility, interrogation and even violence during such common activities as shopping for clothes or using a public bathroom.

In 2011, a trans woman was attacked after using a McDonald’s bathroom in Maryland. Most of the McDonald’s employees only watched, and a few even laughed. In the District of Columbia in 2016, a trans woman was manhandled out of a Giant grocery store by a guard after being subjected to slurs, simply because she had to use the bathroom. Trans people cannot legally be kept from using the public bathroom befitting their actual, self-identified gender in DC. In May 2018, a Republican congressional candidate harassed a trans woman in a Denny’s bathroom in Los Angeles, and even recorded video of herself doing it while claiming that the trans woman was violating the Republican’s privacy. Video recording in a bathroom is illegal in California. A 12-year-old girl and her family were run out of a town in Oklahoma just because the girl, who happens to be trans, used the girls’ bathroom in school. Transphobic parents of other students at the school posted violent threats on Facebook shortly after the young trans girl used the bathroom. The hostility got so bad that entire school had to be closed for two days, and the girl’s parents began making plans to move out of state to ensure their daughter’s safety.

The hostility against trans people in the United States has gotten so bad that sometimes even cis people (those whose assigned sex at birth matches who they are in daily life, as opposed to trans people for whom it does not match) end up as collateral damage, as one woman in Connecticut found out the hard way in 2016. She was accosted for using a Walmart bathroom, mistakenly considered trans for wearing a ball cap on top of short hair. “I cannot fathom the discrimination transgender people must face in a lifetime,” she told The HuffPost. The depths of that discrimination run very deep indeed, which is why a law like SB 2407 is so important—it effectively protects the right of trans people in Massachusetts to safely participate in society.

Despite many obstacles, trans people have made important contributions to society. They include the following:

Those who oppose trans people’s right to use facilities that fit their gender often claim that it puts the safety of cis women at risk, but there is no evidence to support that claim. And of course it remains illegal for a person of any gender to assault someone in a public accommodation or anywhere else. As forensic psychiatrist Brian Barnett wrote in a HuffPost article, “The safety concerns of those opposing the expansion of transgender bathroom access aren’t based in reality.” In Massachusetts, however, Question 3 does not pertain to an expansion of bathroom access. This has been settled law for over two years. Massachusetts is not alone in protecting the right of trans people to safely and legally access public accommodations. Eighteen other states have laws protecting this right. Minnesota was the first state to do so in 1993. In New York City, these protections have been law since 2002.

Support for upholding trans rights to public accommodations—and specifically for Yes on Question 3—comes from a wide variety of organizations and officials. Among them are labor and advocacy groups like the AFL-CIO and the Massachusetts chapter of the National Organization for Women, businesses such as Google and General Electric, colleges including MIT and Harvard, and many police chiefs and religious leaders in the state. The BallotPedia article for Massachusetts Question 3 contains an extensive list of Yes on 3 supporters, which include the above. Financially, support for Yes has brought in about 10 times as much money as support for No. Only one supporter is listed as supporting a No vote, the Massachusetts Family Institute, whose website describes the organization as “affirming the Judeo-Christian values upon which [their idea of family] is based.” They also oppose abortion rights and marriage equality.

Although voting is the obvious action to take to preserve trans rights to public accommodations in Massachusetts, it is only the beginning. Mason Dunn, executive director of the Massachusetts Transgender Political Coalition and co-chair of the Yes on 3 campaign, has called on supporters to help phone bank from anywhere at this website: http://www.theneat.org/ma.html. He also suggests that supporters discuss the matter with friends and family who live in Massachusetts and encourage them to vote. As the incidents mentioned here indicate, the threats against trans people—and indeed all oppressed people—are not confined to the legal and electoral realm. Neither can be the response. The need and urgency of organizing and mobilizing in defense of rights of oppressed and working class people, and the very planet that sustains us all, continues to grow. Since trans voices are often overlooked in discussions, plans and actions, it is important to keep us included in organizing, especially in leadership, facilitation and communication roles. When we stand together against oppression, our ranks are that much stronger for it.