In a speech given at the international rally of the Trotskyist Fraction this May Day, socialist nurse and editor of Left Voice Tre Kwon speaks about how the present crisis has revealed the contradictions of capitalism, in particular the undervaluation of “feminized” social reproductive labor. She shares her experiences as a frontline worker in the middle of a pandemic and the need to build an independent organization of the working class that fights for working and oppressed people. 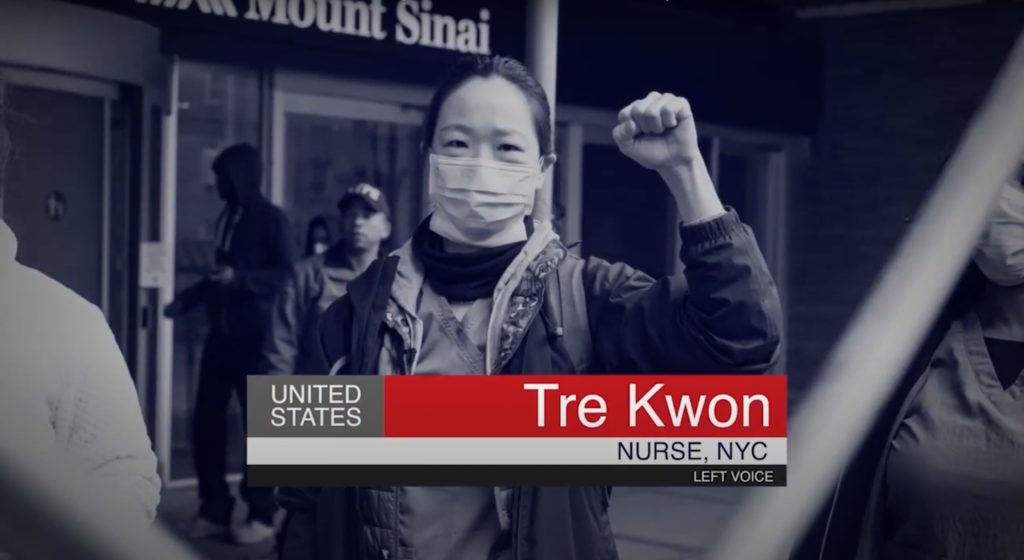 Tre Kwon is a Tre Kwon is a rank and file nurse, mother, and revolutionary socialist. She and other nurses helped form a Health and Safety Committee, organizing actions around New York City and speaking out against Donald Trump’s completely criminal mishandling of the public health crisis. She is also an editor for Left Voice.

My name’s Tre. I’m a socialist nurse working on the frontlines in New York City. Four months ago, I gave birth to Maia. They say when you become a mom, you start to look back on your own mother’s path. US imperialism is threaded through her life and mine. In a way, you could say US imperialism is the reason I’m here.

My mother was born in Korea during the Korean War, which took 5 million lives. It was the battleground where NATO developed its first international forces and strategy. My mother’s youth was marked by military dictatorship, curfew, no-hand-holding with boys, and red meat only on birthdays. When she was 23, she immigrated to New York City and took her first job as a maid. Today, my mom’s a nurse working in a hospital, caring for COVID-19 patients — just like me. She can’t retire or quit to avoid risking her life because she depends on her job.

The pandemic crisis is quickly evolving into a catastrophe on multiple fronts. We’re facing a huge economic depression and many months of uncertainty ahead. Here in the heart of US imperialism, the working class and oppressed are bearing the brunt of the crisis.

In search of the American Dream, my mother immigrated to the U.S. But no amount of dreaming is going to pay for her housing or food. It won’t protect her at her job. It won’t bring back over 70,000 dead already from COVID-19 in the United States.

I work alongside her and 2 million other nurses, 90% of whom are women. “Feminized” work is undervalued in our society. But with the healthcare crisis, recently we’ve seen clearly how social reproductive labor is absolutely essential. We, as women workers, are essential.

Donald Trump’s disastrous handling of the pandemic has caused many thousands of deaths — way beyond the number “unavoidable” deaths by coronavirus. And now he’s rushing the re-opening of the economy.

Trump’s “America First” nationalism and his racist twitter sloganeering is the rhetorical fuel behind scapegoating immigrants, border closures, and quickly intensifying anti-Chinese sentiment. The Democrats are also playing their role in this rising antagonism against the Chinese.

Both parties agree that imperialist oppression must go on. They’re ramping up military operations in Latin America. The sanctions against Iran persist. And the murderous embargo against Cuba, along with blockades on life-saving medical equipment, is ongoing today.

Us frontline workers have been told time and again that we’re “soldiers” in the “war against the virus.” But that is a total lie. The real war underway is the one between capitalists and the working class. We’re not “all in this together.” Workers are paying the greatest consequences of the crisis. Already, 26 million are unemployed. Folks are waiting in long lines at food banks for something to eat. And in an Ohio prison, 1,800 inmates are infected — that’s 73% of the folks locked up there. In detention centers, Mexican and Central American children are getting sick with COVID-19. In New York, the majority of deaths have been people of color — victims of segregated healthcare and structural racism. In fact, people of color are disproportionately represented among precarious workers who don’t have enough savings and don’t have a remote job that allows them to stay at home during the pandemic.

But not everyone is losing during this crisis. Corporations, like Amazon and Walmart, are making money, expanding their profits.

Sure there are squabbles between both Democrats and Republicans, but they’re both looking out for the interests of businesses, instead of the working class and the middle class. In March, they passed a $2 trillion corporate bailout — the largest in history. Unsurprisingly, it has little to nothing to alleviate the burden of debt, loss of income, medical bills, and starvation for the rest of the folks. In a sense, this is what motivates the protests to reopen the economy and “go back to work.”

But we are not taking things lying down or on our knees. Amazon, Instacart, health care, transit workers — We are striking, walking out, and sitting in. And though still on a small scale, we are demonstrating our social power, power which is rooted in our ability to bring capitalist production to a grinding halt.

At New York City hospitals, we’re forming workers’ committees to fight for protective gear and safety at our job. We’re resisting censorship from corporations, the passivity of our unions, and defamation from the government. And we’re fighting alongside thousands of workers across the country for PPE and paid sick leave. We brought that to the center of political debate. And now we’re fighting for the nationalization of healthcare and related industries under worker control.

Frontline workers are showing that the working class has both the power and the interest to give solutions to society’s ills.

We’re putting a spotlight on these struggles in Left Voice, the English-language outlet of our international media network.

My generation and folks much younger than me are facing a grim future ahead with global capitalism in decay. The “American Dream” of immigrant families and the expectation of living better than our parents is quickly crumbling. Bernie Sanders captured the disillusionment with the political regime and his campaign actually propelled or reflected the aspirations for a more humane society, with progressive and pro-worker demands like Medicare for All. But Bernie tied his fate to the Democratic Party from the beginning and when they shut him down, he threw all of his support behind Joe Biden — just at the moment when we most need radical politics. In fact Sanders even voted for the $2 trillion bailout.

So, come November, Donald Trump is going to run for reelection against Joe Biden, the candidate of choice for the establishment Democrats. These two options and the two parties don’t offer a real choice for the working class.

The working class needs independent political representation: our own party that is anti-capitalist and anti-imperialist to the core!

One that fights for the working class and the oppressed while the capitalists and their governments leave us to die in the middle of the crisis. A party of our own. With Left Voice, we’re proposing that the DSA and the Left take up this task. We need a party that takes the exhaustion, the rage, the disillusionment that I feel — that we workers feel — and instead organizes it and direct it to run our society.