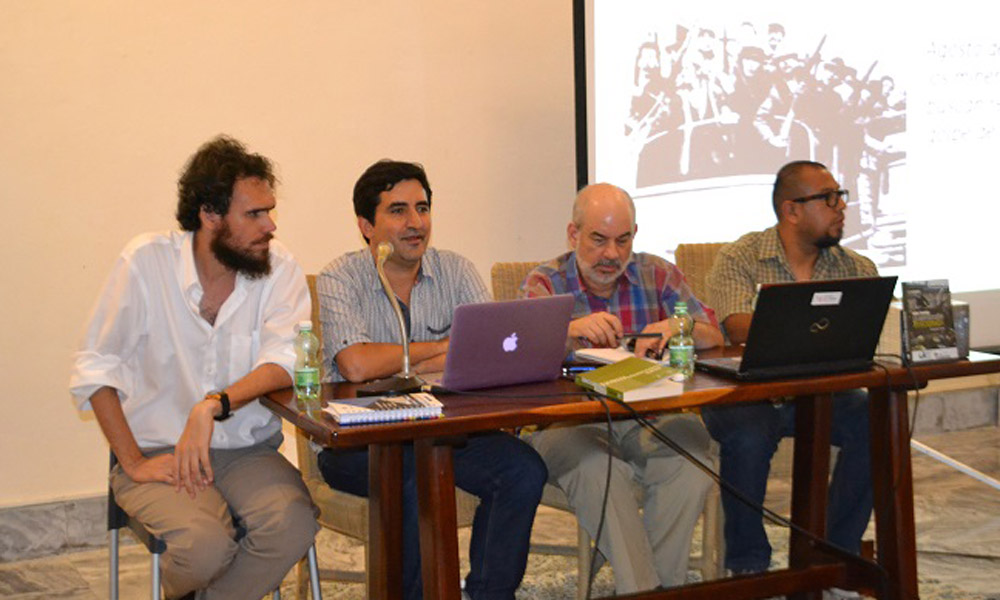 From May 6 to 8, the First International Academic Event on Leon Trotsky was held in Havana. It was sponsored by the Institute of Philosophy and organized by Frank García, a young researcher at the Juan Marinello Institute.

The event brought together 40 international participants. These included renowned specialists such as Paul Le Blanc, Susan Weissman, Robert Brenner and Eric Toussaint, along with researchers, filmmakers, professors and students, many of whom are involved in political activism in their home countries.

The CEIP León Trotsky (Center of Studies, Research, and Publications Leon Trotsky) from Mexico and Argentina, founded by the Trotskyist Fraction-Fourth International, was also present.

Attendees from the United States, Canada, England, Turkey, Mexico, Brazil, Peru and other countries filled the different panels and presented their ideas during the event.

The conference was dedicated to recovering fundamental questions, such as the theory of permanent revolution and Trotsky’s elaborations on the Russian workers’ state. Trotsky’s relationship with other Marxists of his time—such as Walter Benjamin and Victor Serge—was discussed, as well as his works in the fields of philosophy and art (and their impact).

The discussion about Latin America, Cuba and Mexico took up a lot of space, particularly on the last day of the event. Presentations addressed the impact of Trotsky’s ideas in different countries, the image of him that was constructed in the USSR of the 1980s, as well as different experiences of the Trotskyist movement—before and after his death.

We do not intend to exhaustively list all the topics that were addressed, but those three days contained an incredible richness of papers, even considering that many of the presenters had to cut down their contributions for reasons of time.

It was remarkable to see a preview of the documentary “The Most Dangerous Man in the World” by the filmmaker Lindy Laub, with Susan Weissman as a historical consultant. It is based on interviews with Nadezhda Joffe, James Cannon, Pierre Frank, Fanny Yanovich, Jean Van Heijenoort, Harold Robins, C.L.R. James and Esteban Volkov, among others who knew Trotsky personally. For the first time, a 30-minute preview about his exile in Turkey was shown at the event. Laub said the documentary will cover his final years in Russia and the various chapters of his exile.

Several works by and about Trotsky were also presented. This is unprecedented in Cuba, where these books cannot be found. Books included “Trotsky en el espejo de la historia” (Trotsky in the Mirror of History) by Peruvian researcher Gabriel García Higueras as well as Trotsky’s “Escritos latinoamericanos” (Latin American Writings) and “La revolución traicionada” (The Revolution Betrayed).

The preparation of this event—and its success—was the work Frank Garcia, along with Lisbeth Moya and other young Cuban researchers interested in recovering Trotsky’s ideas in order to better understand what happened in the former Soviet Union.

It is not a minor fact that this conference could take place. In previous decades in Cuba, in accord with the Soviet bureaucracy’s line, the figure of Trotsky was discredited and erased from the history of Marxist thought.

It is therefore significant that Trotsky’s ideas are being discussed and that this first academic meeting was convened—all the more so if we consider that the founder of the Red Army is still attacked with historical falsifications, as we recently saw with the TV series “Trotsky,” made by Russian state TV and Netflix.

It must be said, however, that the event faced many bureaucratic hurdles put up by the Cuban authorities. These included the confiscation of books sent by the Leon Trotsky Museum, the complete lack of institutional support and the scant publicity. This latter problem meant that there were very few participants from Cuba, and those who did manage to attend had to make great efforts, in particular several coming from the interior of the island.

The “Latin American Writings” in Cuba

The CEIP León Trotsky presented Trotsky’s “Latin American Writings,” volume 4 of the Spanish-language Collected Works that we are publishing in cooperation with the Leon Trotsky Museum.

The relevance of this presentation is clear. This compilation includes articles, letters and interviews, and a selection from the magazine “Clave—Tribuna Marxista,” which Trotsky supported from 1938 to 1940, in which he analyzed the main political phenomena of his time in Mexico and Latin America.

This book covers bonapartism sui generis, state control of the trade unions, the development of the theory of permanent revolution in the light of Latin American reality and the rise of U.S. domination over the region.

Trotsky’s reflections on the events of his time are just as important, current and valid today, in the context of a new imperialist offensive against Venezuela, Cuba and the region as a whole, and given the recent experiences of the so-called progressive (Pink Tide) governments.

The CEIP, besides presenting this book, also cosponsored the event. We thank Frank García for the words of acknowledgement he offered us at the opening.

The ideas and politics of Leon Trotsky, who had led the Russian Revolution alongside Lenin, and after the latter’s death led the struggle against the Stalinist degeneration of the USSR, are essential to understand what happened in the first workers’ state in history.

In “The Revolution Betrayed,” Trotsky analyzed the material basis of the Stalinist bureaucracy and posed—in the face of the one-party regime—the need to re-establish Soviet democracy and grant full rights to all political parties defending the revolution.

The ideas of the founder of the Fourth International are, at the same time, essential to approach the current debates about Marxist theory and class struggle. That of course includes the future of the Cuban revolution, which today is of fundamental interest to the workers and revolutionary Marxists of Latin America and the whole world.

First published in Spanish in La Izquierda Diario México, May 14, 2019.