Trotskyist Legislators in Argentina Under Attack for Defending Palestine

Last Wednesday, representatives of the Workers Left Front — Unity (FIT-U) in Argentina spoke out against the Israeli attack on Gaza. As a result, right-wing forces are attempting to defame them as “Nazis and antisemites.” A broad petition rejects this reactionary campaign. 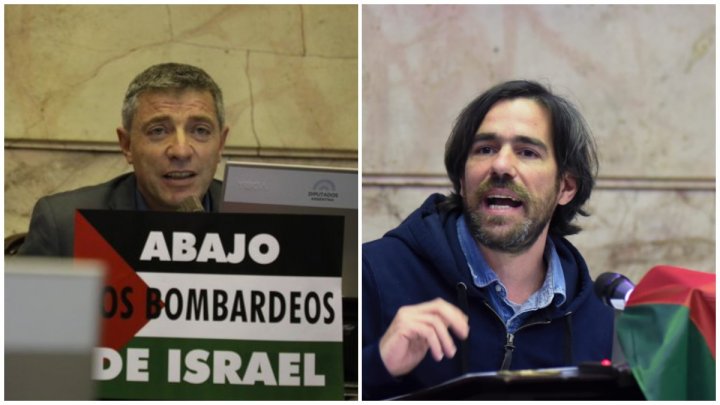 Last Wednesday, representatives of the Workers Left Front — Unity (FIT-U) in Argentina spoke out against the Israeli attack on Gaza. Nicolás del Caño of the Party of Workers for Socialism (PTS) and Juan Carlos Giordano of the Socialist Left (IS) both made impassioned speeches against the bombing campaign, the mass repression, and the systematic segregation by the State of Israel.

People close to the Israeli embassy in Argentina and the right-wing coalition of former president Mauricio Macri launched a campaign against the FIT-U and especially Juan Carlos Giordano. They are attempting to equate anti-Zionism with antisemitism. This is a tactic employed by right-wing forces all over the world, employing a fraudulent definition of antisemitism.

Repudiating this reactionary campaign in Argentina is part of the international struggle to defend the Palestinian people. It has already been signed by numerous left-wing politicians, union leaders, human rights activists, and intellectuals in Argentina and other countries. We call on our readers to sign as well, using this Google Form.

Petition: For the Democratic Right to Defend a Free Palestine! In Defense of the Trotskyist Congressman Juan Carlos Giordano from Argentina

In Argentina, people and organizations close to the Israeli embassy are engaged in an anti-democratic campaign against Congressman Juan Carlos Giordano of the Workers Left Front — Unity (FIT-U).

In a session of Argentina’s Chamber of Deputies last Wednesday, May 19, 2021, Giordano spoke out against the genocidal bombings by the State of Israel in Gaza. He denounced the occupation and defended the Palestinian people, advocating for the rights of both peoples — Jews and Palestinians — to live in the region in peace, without ethnic or religious persecution of any kind.

Giordano is being attacked as a “Nazi and antisemite” in social networks and the bourgeois media, by people and organizations close to the Israeli embassy. They are demanding he be “expelled” from the Chamber of Deputies. The right-wing journalist Eduardo Feinman is one of the spokespeople of the campaign.

This campaign is directed against everyone who defends the Palestinian cause and rejects the policies of ethnic cleaning that have been carried out for more than 70 years by the State of Israel. This attack could create a dangerous precedent to silence all voices that speak up against such outrages, whether in a national parliament or anywhere else.

We reject this campaign of defamation. We defend the right to free expression for everyone who supports the Palestinian cause, in Argentina or anywhere else in the world, demanding a free Palestine.

A complete list of signatures is available in Spanish on La Izquierda Diario.

You can sign the petition yourself using this Google Form in Spanish.