Trotskyist Legislators in Argentina Under Attack for Their Opposition to Zionism

After an initial mistaken vote, the three legislators from the Workers Left Front — Unity (FIT-U) in the city parliament of Buenos Aires came out strongly against a resolution that implicitly equated anti-Zionism with antisemitism. They are now under attack by Zionist organizations. 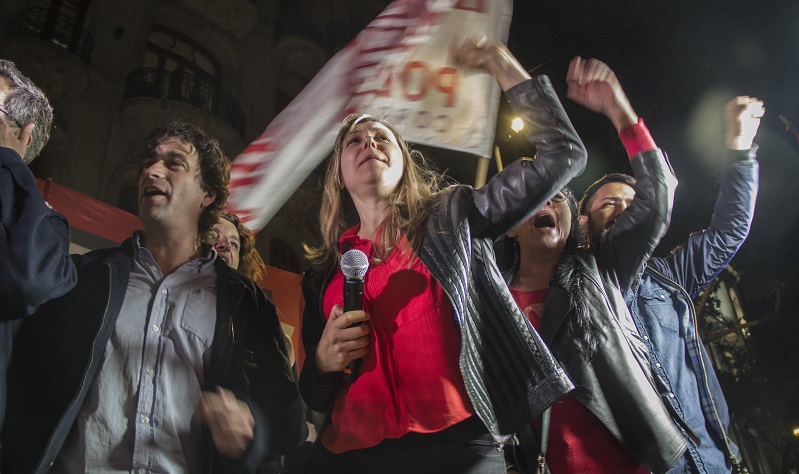 Myriam Bergman of the PTS (center) and Gabriel Solano of the PO (left), two of the three Trotskyist legislators in the parliament of Buenos Aires

The definition contains an implication: “Jewish community institutions” could hypothetically include the Zionist state in Palestine. Therefore, any opposition to this colonial state — that expels and occupies the Palestinian people while defending the interests of imperialism in the region — could be called antisemitic. The IHRA includes 11 “examples” of supposed antisemitism — and of these, seven relate directly to Israel.

The resolution presented to the parliament did not include these examples, or make any mention of Zionism or the Israeli state. The legislature had been given a packet of almost 100 resolutions on a Wednesday evening, and they had to vote on it on Thursday evening. In a first vote, the three Trotskyist legislators from the Workers Left Front — Unity (FIT-U) — Myriam Bregman and Alejandrina Barry of the PTS, and Gabriel Solano of the PO — voted in favor of the resolution in the belief that it was a general denunciation of antisemitism. The parliament voted on almost 100 resolutions with no deliberation or debate.

The comrades corrected their error with a joint declaration, reaffirming what has always been the FIT’s position since its founding: uncompromising revolutionary opposition to the Zionist state.

The FIT-U has criticized the Argentinian government of Alberto Fernández, whose first foreign trip was to Israel to meet the war criminal Benjamin Netanyahu, in the midst of his push to annex further Palestinian territories in the West Bank. This government, which is from the center-left, claims to support human rights, and yet gives support to a brutal occupation regime. As the FIT-U legislators point out in their statement:

We carry out a fight to the death against antisemitism, but always on the basis of denouncing Zionism and the state of Israel, which is based on genocide and the theft of the lands and property of the Palestinian people. Our principled position has been expressed with our active participation in demonstrations in front of the Israeli Embassy in Argentina.

The legislators called on the secretary of the parliament to correct the voting record. This was done: All three FIT-U representatives votes were subsequently regarded as negative.

The very next day, the Zionist Organization of Argentina (OSA) published a statement announcing that it would open legal proceedings against the Trotskyist legislators. This is the logic of the campaign claiming that anti-Zionism is antisemitism: anyone who even questions the definition is smeared as an antisemite.

The OSA statement refers to the Workers Left Front as “deplorable”. They refer to the legislators’ “recognized anti-Israeli and anti-Zionist track record,” and claim that the government’s adoption of the IHRA definition “now gives us a new weapon to take anyone to court who (…) expresses hatred (…) against Zionism as a movement of liberation and self-determination of the Jewish people and against Israel as a Jewish state.”

The legislators, in a new declaration, point out that this is an attack on basic democratic rights such as the freedom of expression — especially for elected members of parliament, who must be able to express their opinions without fear of judicial persecution. This legal norm would allow criticism of any political-ideological movement or any state — except for that of Israel. They reaffirm their unwavering support for the struggle against antisemitism, and continue to denounce the government cover-up of the terrorist attack against the Jewish cultural center AMIA in Buenos Aires in 1993. But this in no way diminishes their condemnation of the crimes of the Israel state, or their support for the Palestinian people’s right to self-determination. The call for a single, socialist Palestinian state in which Arabs and Jews can live together in peace.

The legislators have received support from the International Antizionist Jewish Network in Argentina and the Encuentro Memoria, Verdad y Justicia, the organization that defends the memories of the 30,000 victims of Argentina’s military dictatorship. They met with Husni M.A. Abdel Wahed, the Palestinian ambassador in Argentina, who reacted positively to the corrected vote and recognized the FIT-U’s consistent support for the Palestinian struggle. The entire socialist Left in Argentina, as far as we are aware, has committed to defending the legislators against the Zionist attacks. They deserve support from the international Left as well.

The IHRA definition has been used all over the world, from national parliaments to student associations, to smear the Left. This was most famously used to attack Jeremy Corbyn, the former head of the UK Labour Party who was wildly popular among the youth for his ambitious program of reforms. It was also used in the German Left Party Die LINKE, in order to silence the party’s left wing which expresses solidarity with Palestinians (while the party leadership enthusiastically supports Zionism). In both these cases, the maneuver was successful: Jeremy Corbyn conceded to the pressure and let many of his supporters be expelled from parliament for supposed “antisemitism.” The left-wing deputies from Die LINKE, for their part, left the room during a vote on a resolution condemning even the most basic support for Palestinian rights so that they would vote neither in favor nor against.

The FIT-U has now introduced a bill into the city parliament calling for the chamber to reject antisemitism while also rejecting the false equivalency between anti-Zionism and antisemitism. This is a bill that the Left internationally should support.

For a more thorough example of our position on Palestine, we refer to the Manifesto for a Movement for a Revolutionary Socialist International that we published in 2013:

This is why we defend the right of return for all Palestinian refugees who were expelled from their land by the Zionist colonisation, and we condemn the military occupation in the West Bank and the expansion of Israeli settlements. We are against the false hope of the two-state solution and the reactionary strategy of the Islamic leaderships, who aim to establish a theocratic state. We’re fighting for the dismantling of the Israeli state as a pro-imperialist and colonial enclave, and for a single Palestinian state that includes all of the historic territory, for a workers’ and socialist Palestine where Arabs and Jews can live in peace.