Trump at the Precipice?

The firing of Steve Bannon from his post as Chief Strategist represents a victory for John Kelly and offers the possibility of imposing order between the various factions that surround the president. But is it too late? 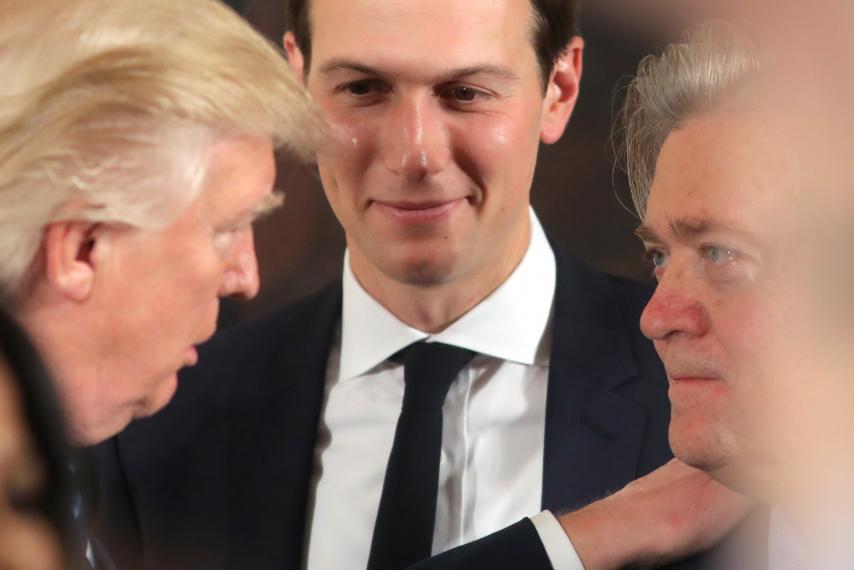 According to CNBC, the brokers of the New York Stock Exchange burst into applause when the news arrived that Steve Bannon, the man behind Trump’s victory in November, was dismissed from his position in the White House last Friday. But not everything is cause for celebration among the capitalists. First, Trump will have to deal with the consequences of Charlottesville, repair his relationship with large sectors of big capital, and avoiding an uprising within his own party.

After eight months of assuming power, Trump faces the worst of a series of crises that have become a recurring nightmare for his administration. And it is not clear just how many allies he has left.

Steve Bannon and the Charlottesville Effect

According to Matthew Continetti of the New York Times, Trump did not require much pressure from Steve Bannon to transform the racist violence in Charlottesville into a demonstration of loyalty to his social base. According to the editorialist, the President “made it clear that it is he, and not Mr. Bannon, who maintains a gut connection with his most die-hard supporters. The most important culture warrior of this administration sits at the Resolute Desk.”

Of course it is possible to imagine Bannon whispering into the president’s ear as he blamed “many sides,” while accusing a supposedly violent “Alt-Left” of opposing the Confederate statues in several states. But according to different news sources, the decision to remove Bannon from his post would have been made days before the bloody events in Virginia. And it was a well-known secret that Trump had told aides he suspected the former director of Breitbart was behind the leaks that have tarnished several members of his Cabinet.

Either way, the president’s inflammatory response to what happened in the southern Virginia city, where activist Heather Hayle died at the hands of the KKK and fascist hordes, may have caused irreparable damage to his administration.

Although the consequences of Bannon’s firing have yet to be seen, his dismissal has obvious costs. Bannon’s isolation will fall like a bucket of cold water on his narrow social base and conservative media outlets like Fox News.

As the editor of one of the sites identified with the Alt-Right wrote: “Any movement to dismiss Bannon is more dangerous for the future of the Trump administration than anything that Robert Mueller can do.”

On the other hand, the presence of Bannon in the White House was a major thorn in the side of Trump’s military advisors, like HR McCaster and James Mattis and an obstacle for Chief of Staff John Kelly in the arduous task of creating order within the President’s closest circle.

Not only is Bannon’s exit a win for John Kelly, but also for the Goldman Sachs wing of the White House led by Trump’s son-in-law, Jared Kushner, a steely opponent of Bannon’s trade and foreign policy, and a representative of the “Globalists” allies of the president.

Last week in an interview with the American liberal media outlet the American Prospect, Bannon made it clear that his time in the White House was nearing the end. The sarcasm with which he referred to the president’s closest circle was in fact a letter of resignation, addressed to the public: “Trump’s presidency that we have fought for and won, is over,” said Bannon.

But this purge is far from resolving the political crisis that continues to affect the president. According to the latest polls, Trump’s approval is hovering at 36%, against a 55% disapproval. As several analysts alert, Trump’s political capital is running out and that puts the whole regime at risk and immediately places the Republican Party in a difficult position.

Republicans at the Crossroads

The Charlottesville effect has shaken the Republican Party. According to the Washington Post, GOP legislators are torn between withdrawing their support for the president or maintaining it with the hope of of advancing a conservative agenda in Congress and succeeding in the upcoming mid-term elections of 2018.

Tom Ridge, the former Republican governor of Pennsylvania and fervent opponent of Trump has stated publicly what few in his party dare to say: “A party requires first and foremost leadership, but at this moment, we are navigating without a helm. We need an opposition force…and frankly, if we get it, the majority of the states will applaud us.”

According to the same newspaper and various leaks in the press, Ridge’s concern has begun to resonate among more and more Republican legislators, particularly after the racist attack in Charlottesville. The question in the air is whether with John Kelly at the head, the behavior of the president can be moderated. But for now, according to the Washington Post, these discussions are still held in private..

A sector is aware that Trump still maintains the support of the Republican hardliners in key states like Iowa, for example. And that the ambitious tax reform that will be passed in the next period, as well as the health agenda, requires unity with the president. According to a Republican strategist, tax reform can “lessen some of the anxieties that have been on display last week (…) [W]ill cutting middle-class taxes improve the economy? A lot of people will forgive a lot of sins if that happens.”

However, the more traditional wing of the party looks with great concern on Trump’s actions, from his public criticisms of Attorney General Jeff sessions, to his attacks on Senate Republicans represented by Mitch McConnell, even the dismissal of the former president of the RNC Reince Priebus as White House Chief of Staff.

Trump’s statements after the racist violence perpetrated by White supremacists, in which he declared that both sides are responsible precipitated various Republican reactions. Republicans were further incited by by the angry messages on Twitter that the president launched against legislators like Jeff Flake and Lindsey Graham who criticized him openly. Major Republican figures have come out to distance themselves from the president, such as Cory Gardner, Ted Cruz, Marco Rubio, Bob Corker, Jeb Bush and Mitt Romney.

The latent contradiction inside the GOP is summed up by the British conservative magazine The Spector, which said in an editorial that, “Once again, Trump has shown to what extent he is unfit to be president. But once again we can also see the forces that brought him to power.”

As if this were not enough, the sectors of hegemonic capital that had, until now,acted under the premise of business as usual decided to make a strong demonstration of rebuke n to the administration.

The declarations of Trump in respect to the events in Charlottesville not only generated widespread repudiation, but also led many CEOs of the country’s largest corporations to make a strong denouncement of the president.

The endorsement of the actions of the white supremacists headed by David Duke, former leader of the KKK and Richard Spencer, co-organizer of the Unite the Right march in Virginia led to the rupture of the pragmatic agreement that had existed between big business and the Presidency r until now.

The business councils of the administration were dissolved soon afterwards. And although the White House has gone to lengths to say that this was at its own initiative, the PR departments of these companies have denied the version of the president.

Even before the press conference in which Trump refused to condemn white supremacy, the executive director of the pharmaceutical Emporium Merck told the press through a statement, “I am resigning from the President’s the American Manufacturing Council (…) America’s leaders must honor our fundamental values by clearly rejecting expressions of hatred, bigotry and group supremacy, which run counter to the American ideal that all people are created equal. As CEO of Merck and as a matter of personal conscience, I feel the responsibility to take a stand against intolerance and extremism.”

The CEOs of Intel, UnderArmour, Campbell’s, 3M, PepsiCo, BlackRock, and GE among others, later did the same.

The removal of Steve Bannon as Chief Strategist of the White House is the corollary to the recurring resignations and dismissals of the advisors closest to the president, tainted by Russiagate and accused of illegal leaks by the president himself. A defeat of the ultra-right wing in the Trump administration leaves a greater margin of maneuver for Kushner and the CIA. It is an expression of the weakness of Trump’s Bonapartism and instability that is the defining mark of this administration.

It remains to be seen whether the Republican Party will break with Trump and if a sector of capital truly decides to abandon the president. For now, there seems to be an expectation that the shakeup in the White House can put things in order.

At present, three military men are in charge of the formerly ungovernable White House: John Kelly, HR McMaster and James Mattis. Is it too late to repair Trump’s presidency? Will it mean a greater Bonapartization of the administration with unforeseen consequences for both domestic and foreign policy? .

What is certain is that, the disruptive nature of Trump, both for the U.S. for the world order is undeniable. We will see.