In an attack ad released this week, Trump claims that, “Joe Biden has a Racism Problem.” Biden is a racist. And the ad is deeply hypocritical coming from a lifelong racist like Donald Trump. 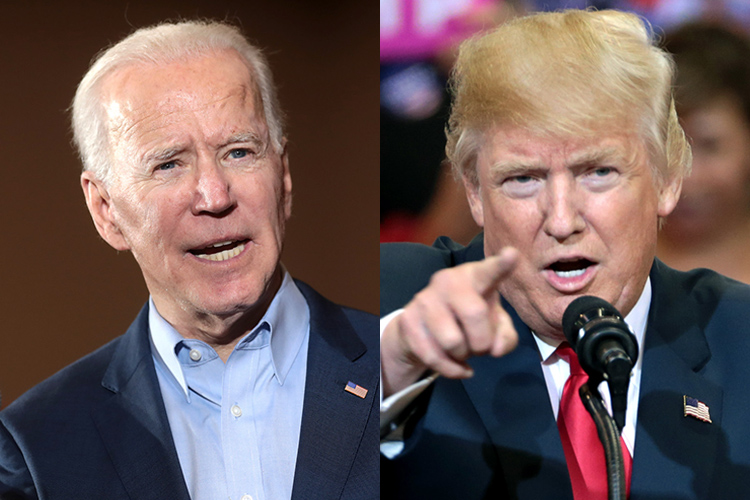 On Tuesday evening, Donald Trump posted an attack ad on Twitter focusing on Joe Biden’s past racist statements. The video aims to undermine Biden’s support among Black Americans, particularly after he announced Kamala Harris as his running mate in a bid to shore up Black votes. Biden’s racist record and statements have opened the door to these attacks from his right. Although Trump is correctly pointing out Biden’s racism, the ad is deeply hypocritical given that Trump is also a racist.

The video was released hours after the Biden campaign announced Kamala Harris as his running mate. It opens with the text, “Joe Biden has a racism problem.” We then hear audio clips of Biden’s past racist statements, like one made earlier this month: “Unlike the African American community, with notable exceptions, the Latino community is an incredibly diverse community.” Other recent clips include his comments that Black people who don’t vote for him “ain’t Black,” and that, “Poor kids are just as talented as white kids.” In a clip from 2007, Biden refers to Barack Obama as the “first mainstream African-American who is articulate and … clean;” in another clip from back in 1973, he says, “The two-party system is… good for the Black.”

The ad, which now has 6.8 million views, also plays a clip of Kamala Harris’ criticism of Joe Biden from the Democratic Primary debates last year. Referencing Biden’s praise for segregationist senators, Harris said, “It was hurtful to hear you talk about the reputation of two U.S. senators who built their reputation and career on the segregation of race in this country.” The inclusion of this comment plays into the nickname that Trump is using for Harris: “Phony Kamala,” based on her decision to join the ticket despite heavily criticizing Biden.

Biden has, undeniably, opened himself up to these kinds of attacks. His history of making statements like those in the ad — often euphemistically called “gaffes” — is a reflection of his lifelong racism, which is expressed equally if not more strongly in his politics. He has vocally championed and often had a hand in creating many policies that have had a disproportionately destructive impact on Black and Brown communities, such as the 1994 Crime Bill and the War on Drugs. In 2003, he eulogized South Carolina Senator Strom Thurmond, a famous segregationist. He served as the Vice President of the Obama administration, which oversaw the utter destruction of Black wealth — particularly Black home ownership — in favor of rescuing capital in the wake of the 2008 crisis.

Trump’s attack ad ends with Biden saying, “Apologize for what?” Indeed, Biden has been adamant in his refusal to apologize for his racism. And what would it even mean for him to apologize when he and his party champion the racist, anti-worker policies that serve their bankrollers? The Democratic Party is just another side of the same racist, capitalist coin of U.S. politics.

However, the ad is extremely hypocritical: Trump himself is extremely racist, as is everything about the Republican Party. Trump has repeatedly used racism to pander to his base. From the Muslim travel ban, to his violent border policies, to his ruthless support for police brutality and repression, Trump is an enemy of Black and Brown people. Before he became president, he was famous for advocating for the death penalty for five Black and latino teenagers, and for helping to spread the myth that President Obama was born outside the U.S. Like Biden, Trump has a history of racist statements: He refers to the coronavirus as the “Chinese virus,” and once asked why people from “shithole” countries were coming to the U.S.

Trump’s hypocritical ad is a desperate attempt to chip away at Biden’s electoral lead. He is currently trailing Biden in national polls and in several battleground states such as Florida and Michigan. Biden’s history of racist statements and support for racist policy is useful for Trump to tap into in order to undermine his support among people of color. We must be critical of Biden’s racism, and be clear about the fact that the racist, capitalist Democratic party is unworthy of our support. However, we must also see through Trump’s disingenuous ads, and refuse to let him get away with his own racism. A pox on both their racist houses.