This weekend, white supremacists held another Trump rally in Oregon. They beat up Black Lives Matter protesters and spoke about shooting Democratic Party politicians. With Trump emboldening the far right, how can we stop them? 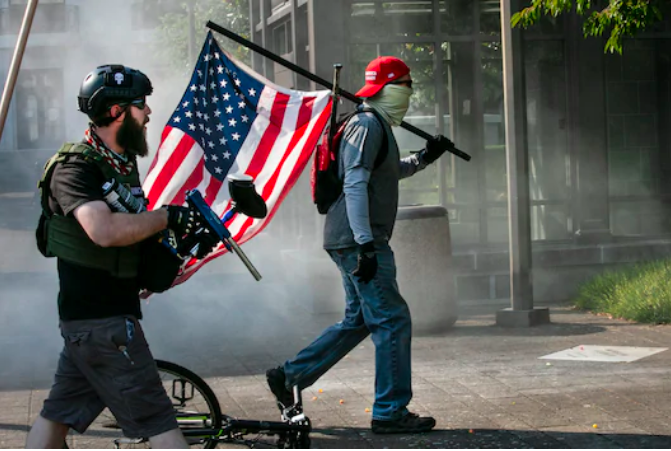 On Labor Day, armed white supremacists held yet another rally  entitled “Oregon For Trump 2020 Labor Day Cruise Rally.” Over 1,000 supporters waving Trump flags, including groups like Patriot Prayer and the Proud Boys, held a car caravan through the suburbs of Portland. Many then descended on Salem, Oregon, where they gathered for a rally in front of the state capitol.

Many of these Trump-supporting white supremacists came out dressed in body armor and fatigues and brandishing rifles, baseball bats, paint guns, and Trump flags. They taped over their license plates so that they couldn’t be identified when they engaged in violence. One of the speakers blatantly said, “I think these democratic leaders need to be shot dead”— which  the sparse crowd of Trump-supporting onlookers received with cheers.

During the rally, they attacked Black Lives Matter activists who had organized a small counter-protest across the street. One video shows Trump supporters chasing a Black Lives Matter activist, hitting him with a baseball bat, punching him, and macing him. Another shows a crowd of neo-fascists chasing another BLM activist with baseball bats, shooting paintballs at her, and throwing her to the ground.

The police arrested two of these violent neo-fascists. Only a bit later, video evidence shows the neo-fascists who had been arrested smiling and chatting with the cops. These white supremacists were released only a short while later: a slap in the face to all of the Black Lives Matter activists who have been held for hours whose only crime was protesting for Black Lives.

Notice any difference in how police “arrest” violent Proud Boys vs how they “arrest” protestors? #PortlandProtest #PDX #SalemOR https://t.co/071glVJYu4

The fact that the cops support and protect the radicalized right could not be more clear. Black Lives Matter protests have been criminalized and brutally attacked by the cops. Just this weekend, which marked the 100th day of protests, over 100 people were arrested in Portland alone on Saturday night.

Similar scenes of violence by the police against protesters have occurred throughout the country. In Rochester, where video of Daniel Prude’s brutal murder at the hands of the police has rekindled protests, the cops tear-gassed those speaking out for Black lives.

Tensions are running high in Portland as last week, a Patrior Prayer member Aaron Jay Danielson was shot and killed, allegedly by anti-fascist Michael Forest Reinoehl. Danielson has become a symbol for the radicalized right, with his image on signs at this weekend’s protest. On Thursday, the police murdered Reinoehl as they moved in to arrest him. While details of the arrest are still unclear, what is clear is that over and over, murderous right wing white supremacists are taken into police custody without incident while Black Lives Matter activists are killed by the cops. This is true from Kyle Rittenhouse, who murdered two people in Kenosha, to Dylann Roof, who murdered church-goers at the 16th St Baptist Church.

The mobilization in Portland by violent white supremacists is just another example of an increasingly mobilized  far right, emboldened by Donald Trump this election cycle. It seems that every weekend there are small far right mobilizations, from the ones in Portland, Kenosha, Stone Mountain, and more.

Throughout the BLM uprising, Trump has attempted to mobilize a radicalized neo-fascist right to confront the protests. That’s what “when the looting starts, the shooting starts” was meant to do. However, the BLM protests that drew out millions and had the support of millions more drowned out the far right. Yet, throughout the uprising, we’ve seen these white supremacists confront and attack protesters, running them over with cars in dozens of instances throughout the summer.

While these neo-fascists have always been in and around the protests, we are now seeing them act in an even more emboldened manner as the Black Lives Matter protests become smaller and Donald Trump’s re-election campaign fans the flames and provides support. Trump has spoken out in support of the actions of Kyle Rittenhouse, the white supremacist who killed two BLM protesters in Kenosha two weeks ago, falsely claiming that Rittenhouse acted in self-defense against violent proteters. Trump is running a law and order re-election campaign, aimed at criminalizing Black Lives Matter proteters, who he has dubbed “thugs” engaged in “domestic terrorism.”

Over the weekend, Trump tweeted “Rochester N.Y., Brooklyn N.Y., Portland – All had bad nights, all weakly run by Radical Left Democrat Governors and Mayors! Get the picture?” At a Labor Day news conference, Trump said local police should seek “retribution” against protesters and hailed the police murder of anti-fascist Michael Forest Reinoehl: “US Marshals went in, and they were not playing games. If somebody is breaking the law, there has got to be a form of retribution.” Earlier in the week, he also signed a memo threatening to cut federal funding to “lawless” cities, including Portland.

The Cops and the Klan Go Hand in Hand

Portland has long been the site of right-wing violence. Ricky Best and Taliesin Myrddin Namkai-Meche were allegedly killed by white supremacist Jeremy Christian in Portland in 2017 when they tried to stop Christian from threatening two black teenage girls. The cops and the neo-fascist groups like Patriot Prayer and the Proud Boys work together, with the cops repressing counter protests and supporting the right wingers. This was evident in Kenosha, as the cops offered water and support to armed right wing vigilantes and even allowed Rittenhouse to walk away from a crime scene.

Right wing vigilantes work hand in hand with police to repress and intimidate the Black Lives Matter protests. During the BLM uprising, the Portland police force has been amongst the most brutal, firing tear gas and beating protesters under the leadership of a Democratic Mayor and a Democratic Governor.  Trump also sent in federal troops to further the repression, resulting in kidnappings off the street and a fractured skull by a protester. As a result of national outcry, the troops left Portland— although the repression has continued in the hands of the police, which work hand in hand with white supremacists.

There Are More of Us Than Them: Shut it Down

This isn’t normal. It shouldn’t be normal. And we have to stand up.

In this electoral cycle, there is a mistaken illusion that a vote for Biden and Harris will defeat these neo-fascists: it won’t. They are a product of the society built by the Democrats and Republicans: by Trump and by Biden. It is evident that the Democrats won’t stop the white supremacist right: after all, Portland and Kenosha are governed by Demcrats. It’s Democratic run cities that have been repressing protesters and protecting neo-fascists as they attack Black Lives Matter activists. It is dangerous to believe that the Democrats can stop the rise of the far right. That misplaced faith wastes energy and resources that we can and should be devoting to the struggle for Black Lives, the struggle against the far right, and the struggle against white supremacist Joe Biden and the racist, imperialist Democratic Party

But, as the Black Lives Matter protests and the protests after the Charlottesville attack have shown, there are more of us than them.

We have to show them. That means mass protests against neo-fascists, like we did after Charlottesville. But protesting isn’t enough. It means actions like the Washington DC subway workers took, refusing to transport the Unite the Right rally. In a public letter, the union said, “Local 689 is proud to provide transit to everyone for the many events we have in D.C. including the March of Life, the Women’s March and Black Lives Matters. We draw the line at giving special accommodation to hate groups and hate speech.” The local then voted to give Jeter discretionary power to declare a strike. It means shutting down cities that host these hateful, dangerous and white supremacist rallies.

It means showing, in no uncertain terms, that although being backed by the President, these neo-fascists are a fringe group, and we are bigger and stronger than they are. We can and will fight them, as well as the cops and the capitalist system they protect.