President Donald Trump and First Lady Melania Trump have tested positive for coronavirus, raising even more doubts about the future of the presidential election next month. 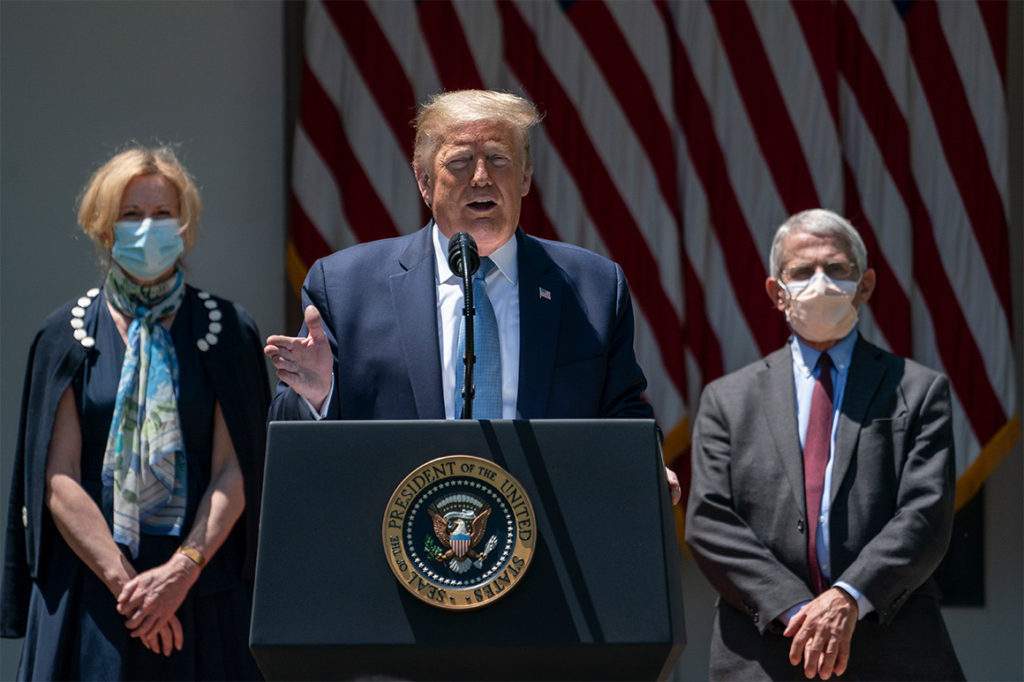 Early this morning, just hours after the news was made public that presidential advisor Hope Hicks had tested positive for Covid-19, Donald Trump reported that both he and the first lady had also tested positive and would begin a 15-day quarantine at the White House. This makes Trump the latest right-wing leader and coronavirus skeptic, after Brazil’s Jair Bolsonaro and the UK’s Boris Johnson, to contract the disease.

With only one month left before the general election, the president’s illness adds more uncertainty to an already volatile political situation, dominated by the pandemic, economic crisis, social unrest, and right-wing reaction. Trump’s campaign team will now have to completely change their upcoming agenda in the final stretch of the campaign. A fundraiser in Washington and a rally in Florida — a key state in the presidential battle — have already been suspended. Vice President Mike Pence has so far tested negative, which would allow him to participate in the debate scheduled with Kamala Harris this week.

How this will affect the remaining weeks of the Presidential campaign race remains to be seen, but it is highly unlikely that the President will be able to participate in the next two debates or attend any further campaign rallies before Election Day. Further, should the President become seriously ill, it is unclear how this would impact the election. No candidate for U.S. President has ever died or been seriously incapacitated between being nominated and the general election, so this would be an unprecedented situation. If Trump’s condition becomes serious, Mike Pence would take his place as the President in the meantime, but it is unclear what would happen with the campaign. If Trump is not able to be the candidate, whether due to death or incapacitation, the RNC would decide his replacement.

These test results come amid ongoing criticism of the President for his handling of the pandemic and his comments about Covid-19 in Tuesday’s presidential debate. The United States is currently leading the way in coronavirus-related deaths, with more than 200,000 fatalities, thanks in large part to the criminal negligence and malfeasance of the Trump administration and its refusal to put safety over profit. Both Biden and debate moderator Chris Wallace of Fox News confronted the president on Tuesday for downplaying the risks of the virus and minimizing the use of masks. Beyond speculations about his health — Trump’s age and physical condition put him at high risk for serious complications from the virus — this situation could further undermine the credibility of his administration and its handling of the pandemic, the Achilles heel of his campaign. He could try to use this situation to cast even more doubt on the election’s legitimacy, appealing to his voters to prevent the Democrats from “stealing” the elections.

American, European, and Asian indices all collapsed after the presidential announcement. Oil prices also suffered an abrupt fall in response to the news. This contradicts Trump’s attempts to present himself as the best candidate for Wall Street and as the one who can bring financial security to speculators. The Dow Jones fell 900 points, the S&P fell by 2.5 percent, and the Nasdaq Composite fell 2 percent. This is the third week in a row that the stock market has fallen. The financial capitalists are clearly wary in the face of the new wave of the coronavirus in the United States and Europe, the economic effects of the pandemic, and the uncertainty of the presidential election.

President Donald Trump and First Lady Melania Trump will be able to quarantine in luxury with access to the best medical care in the world. Meanwhile, those who suffer the most devastating effects of the pandemic and Trump’s science denial are the workers, particularly the poor, the homeless, those in Black and Latino neighborhoods, and the precariously employed. High unemployment and a lack of access to healthcare have exacerbated the situation, a reality to which the presidential candidates offer nothing but empty promises.