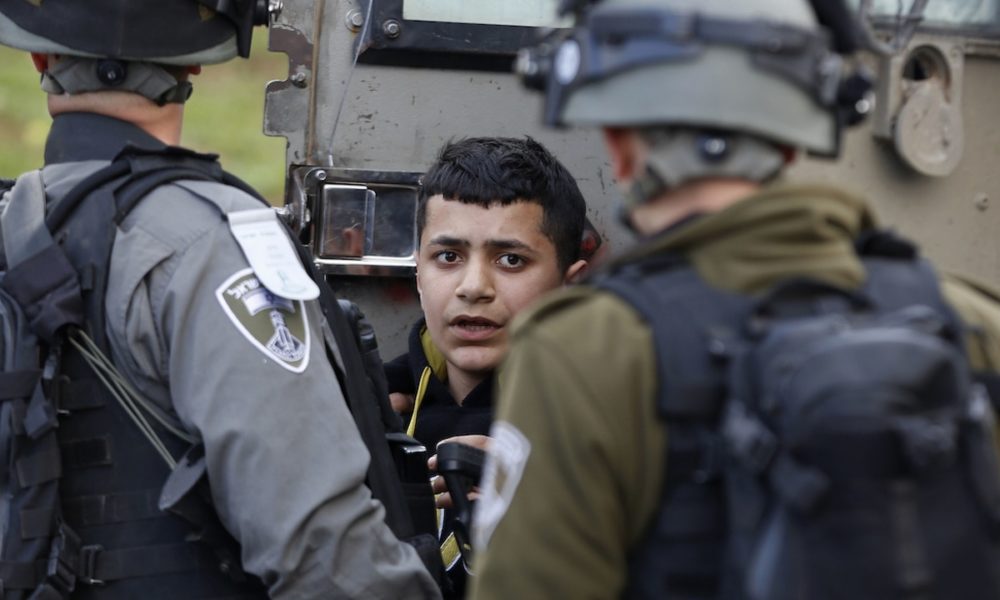 Israeli officers arrested a Palestinian boy during a 2017 protest outside an Israeli military prison in the occupied West Bank. Photo: Majdi Mohammed/AP

In presenting his so-called Middle East “peace plan,” Trump said that his proposal “presents an opportunity in which both sides would win, a realistic solution for two states that would resolve the risk presented for the security of Israel by a Palestinian State.”

Trump posted a map shortly after on his Twitter account, showing the Palestinian State contained almost entirely inside Israel—with the exception of Gaza’s border with Egypt—and the loss of the Jordan Valley, a fertile territory bordering Jordan and the Dead Sea which would remain under Israeli control.

But his “realistic two-state solution,” which further favors Israel’s interests, creating yet another legal framework by which to sanction the continued occupation of territories and oppression against Palestinian people, seems to be more of a recipe for war than for peace. It is a war that the US has armed Israel to the teeth to wage— and one for Palestine’s very existence.

Trump’s plan necessitates that Palestinians completely renounce their historic claim to their land, occupied by the Israeli State. This would include the withdrawal of the timid requests made by the Palestinian Authority to international organizations.

Despite massive repression, the primary demand of the Palestinian masses cannot be quelled: the right of return.

The plan is a one-sided initiative. The Palestinians—whose authorities broke relations with Washington after the United States moved it’s embassy in Israel to Jerusalem—were completely absent from negotiations.

The core of Trump’s project is based on furthering Israel’s expansionist, settler-colonial project. For Palestinians, it establishes only the most limited sovereignty over their future “country,” permitting the Israeli border to cut further into the West Bank, and protecting Israel’s illegal settlements. Among the central points is the legalization of the Israeli occupation policy through the granting of the fertile Jordan Valley in the West Bank, a territory populated by Palestinians, to Israel. It is no coincidence that the occupation of the Palestinian territories in the West Bank has been one of Netanyahu’s campaign promises. Netanyahu plans to start launching this aspect of the plan as soon as this week.

Another of the key points is that the supposed Palestinian “state” would remain fragmented, with Israeli settlements inside connected to the Israeli state through corridors that split the territory. Free movement throughout Palestine would still be prohibited: the Palestinian territories of Gaza and the West Bank would be connected by a long tunnel that would cut through Israel. This means expanded checkpoints, militarization and everyday harassment of Palestinian people simply attempting to go about their everyday lives.

Jerusalem would remain the “undivided” capital of Israel, a decision sanctioned by Trump in his moving of the United States Embassy from Tel Aviv to Jerusalem. The majority of countries don’t have their embassies in Jerusalem nor do they recognize Jerusalem as the capital of Israel, although countries such a Brazil under Bolsonaro have followed Trump’s lead.

The key points of the plan make up a Palestinian territory colonized even in details such as the impossibility of joining global organizations without Israel’s permission and the obligation to withdraw all their demands in international courts. Meanwhile, the further encroachment on territory at the hands of more than half a million Israeli settlers will not be reversed.

A peace plan imposed by bullets

Trump’s plan sparked immediate rejection by Palestinian leaders. The Palestinian president, Mahmoud Abbas, has always been ready to sit down and negotiate with the previous U.S. administrations that, during the previous decades, managed the criminal policies of Israel. Faced with Trump’s proposal, however, he called the plan “the slap of the century” and said to it “a thousand times no.”

Additionally, the Palestinian people expressed their outrage in the streets over the so-called “peace plan” unilaterally launched by Donald Trump and Benjamin Netanyahu on Tuesday. The cities of Hebron, Ramallah, Bethlehem, Rafah, and areas of the Jordan Valley, among other places, were the site of protests.

The mobilizations were met with severe repression by the Israeli armed forces which used gases, rubber bullets, and even live ammunition. Dozens of protesters had to be hospitalized with respiratory problems and rubber bullet wounds, as well as 3 wounded with lead bullets.

The Netanyahu government announced that it will reinforce the troops with special combat forces. It is clear that the White House and the Zionist leaders intend to impose this “peace plan” by force with gas and bullets. The violent reaction by the Israeli government toward the Palestinian protestors underscores the colonialist, reactionary, and anti-Palestinian character of this “agreement of the century” as Trump called it.

Even Amnesty International described the “peace plan” as “a manual for more suffering and abuse in Israel and the occupied Palestinian territories,” and called for the international community to reject it.

These voices seem to matter little to Washington. “It doesn’t really matter what the Palestinians say in the short term, we are going to keep this option open for them for four years,” US Ambassador to Israel David Friedman told reporters.

According to The Guardian, plan designer Jared Kushner, Trump’s son-in-law, demanded that Israelis and Palestinians not talk to him about history. In view of the continuity between this plan and Israel’s founding zionist project, this request implies the absolute renunciation of the Palestinians to their legitimate and historical rights.

The announcement not only furthers the zionist project, but also politically favors both Trump’s and Netanyahu’s immediate interests. The annexation of the Palestinian territory in the West Bank will be a great electoral boon for acting Prime Minister Benjamin Netanyahu who in March will try to retain power and achieve a shield of immunity from the corruption charges that are currently weighed against him. This announcement also benefits Trump in his upcoming election campaign, allowing him to take advantage of the international arena, positioning himself as a “statesman,” and taking focus away from the recent impeachment proceedings in the Senate.

The Israeli state continues to deepen its colonizing enterprise, occupying Palestinian territories for its own interest and expansion, with the protection and sanction of U.S. imperialism through Trump’s “peace plan,” violating the basic rights of the Palestinian people. At the same time, it maintains a true apartheid against the Palestinian population, intensifying human rights violations and repression.

A true peace and a single state in which Arabs and Jews can live together in full equality will not be possible as long as there is a State of Israel, especially one that functions as an arm of U.S. imperialism in the region.

A State that houses the working people, regardless of whether they profess the Muslim, Jewish, Christian, or any other faith, may be realized through a working-class and socialist Palestine that includes all of its historical territory, which rejects the U.S’s attempts at an unjust and false “two-state solution” that, in reality, is nothing more than codified oppression of the Palestinian people.