Trump signs an executive order that brings back a version of the Muslim Ban. 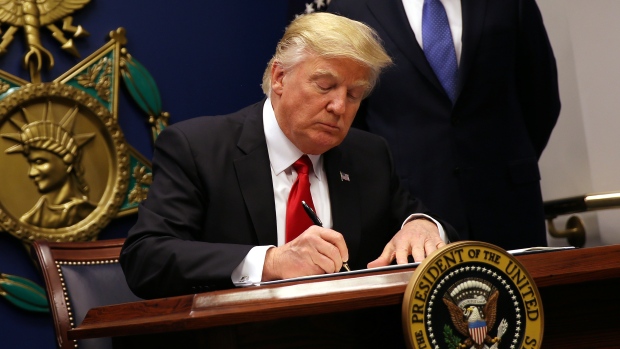 As Trump promised, the #MuslimBan is back – dressed in more timid clothes but keeping the same hateful essence. In the next two weeks, the new 90-day travel ban – including six rather than seven countries – will be instituted. Iraq has been spared from the list after the uproar resulting from collaborators with the US military being barred from entry. Even Defense Secretary Mattis suggested taking Iraq off of the list because, as he argued, it would be more difficult to coordinate efforts against ISIS.

There are some important differences between the newest executive order and the previous one. First of all, permanent residents and current visa holders will be allowed into the country. Also, in an attempt to disguise the Islamophobic nature of the ban, the exception for persecuted religious minorities (meant to favor Christians) has been removed. Trump also backtracked on a permanent ban against Syrian refugees. The current executive order includes a 120 day ban that will be revisited. 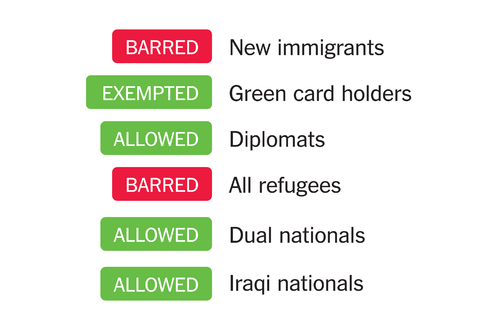 From The New York Times

However, key elements remain the same. For 90 days, people will be denied entry from six predominantly Muslim countries. The number of refugees allowed in the country this year will drop from 110,000 to 50,000, compounding the worldwide refugee crisis.

The official justification for the travel ban is that these countries breed terrorists, due to the influence of ISIS. In Trump’s logic, the US should therefore be more careful in letting these immigrants into the country.

This official justification simply does not hold up to the facts. Nationals from the seven originally targeted countries have not committed any terrorist attack on American soil from 1975-2015. This fact led Kellyanne Conway to have to invent a terrorist attack that never happened in order to justify the original travel ban.

Other people certainly have committed terrorist attacks on US soil. Mass shootings have become commonplace, and many, like the Charleston Church shooting, are perpetrated by white supremacists. Hate crimes against people of color and religious minorities are on the rise while Trump stokes fear of those very same people.

The sick irony of xenophobia is that mass immigration is created by American imperialism. In fact, the Obama administration bombed more countries than Bush – seven to Bush’s four. These seven countries are the ones in Trump’s original travel ban.

American foreign policy in the Middle East helped create the refugee crisis: Obama dropped three bombs an hour in the past year and destroyed the homes and lives of families, making them refugees to begin with. Despite the tremendous propaganda campaign by corporations, Hollywood and American leaders, most people would rather stay in their homeland than come to the US. However, their homes have been demolished and their families murdered, so they seek a safer life elsewhere. The US, which helped create the refugee crisis, is further closing its doors to these refugees.

Two days after the new Muslim Ban will be the International Women’s Strike. The fight against the travel ban and all of Trump’s xenophobic policies must be at the center of our struggle.