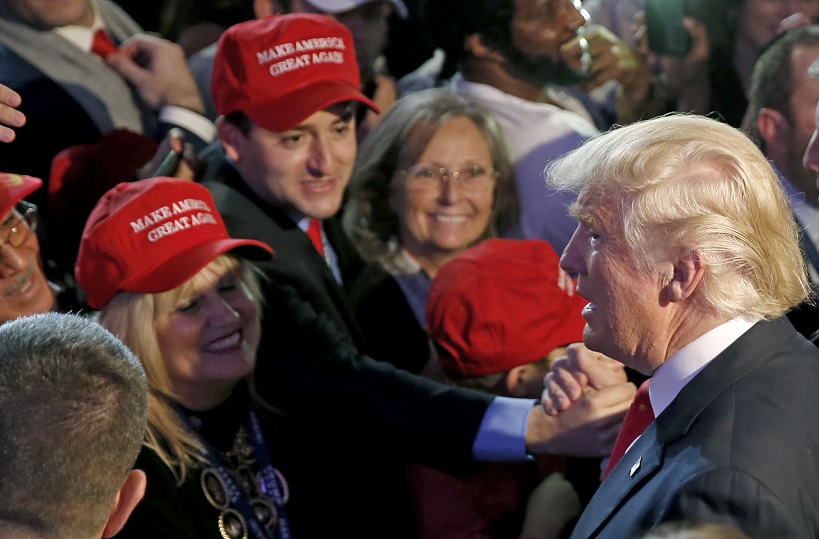 That is not all. The Republicans obtained a majority in the House and Senate and will have the ability to fill the Supreme Court with a conservative majority. The entire state authority of the world’s greatest imperialist power is now under the control of the extreme right-wing sector of the two-party system. It remains to be seen, however, what frictions will develop between Trump and the Republicans over essential aspects of his economic program.

The driving force behind Trump’s victory is already widely considered a profound “populist uprising” of discontented voters who found a vehicle for expressing their indignation against the political establishment of both parties in the xenophobic, racist, misogynist tycoon. It was a slap in the face for the elite, delivered by millions of workers and middle-class people who have lost or fear losing their jobs and have not seen any progress in decades.

Mass liberal media has diagnosed him as “narcissistic.” Actually, rather than suffering from a psychological condition, Trump practices classic political demagoguery. This explains the apparent contradiction: the leader of this protest against the establishment is actually one of the richest businessmen in the country. Trump undoubtedly interpreted the wishes of impoverished white Americans for a “savior,” assuming the role of a strong man who uses his economic power and personal success as proof of his ability to implement far-reaching “solutions”: build a wall on the border with Mexico, deport 11 million undocumented immigrants, apply a 35 percent tax on Chinese imports, reject protocols against climate change and bring jobs back to the US from overseas.

Although the reasons that led millions of Americans to vote for Trump are at first sight domestic, they are linked to the decline of US power in the world and to the failure of the “centrist” foreign policies implemented by Obama.

It is no coincidence that the main slogan of Trump’s campaign was “Make America Great Again.” For him, this will be done through selective isolationism in the use of military power, economic protectionism against competitors (ie., China) and partners (Mexico) and the reaffirmation of “American values”–i.e. conservative values–in the face of the threat represented by the “other”: immigrants and minorities (African Americans, Muslims, LGBT people, etc.).

Even during the campaign, when his election still seemed unlikely, Trump predicted that his victory would be “Brexit times three.” That may have been an understatement. This sudden shift in US policy will inevitably have long-term geopolitical consequences and is probably the most conclusive sign that the foundations of the neoliberal order–led by the United States since its victory in the Cold War–and the base of the parties of the “extreme center” have been eroded by the capitalist crisis since 2008.

If Obama once embodied the “populist illusions” on the left, Hillary Clinton has represented the restoration of a corporate, warmongering establishment–the confirmation that there is no other choice but “politics as usual.”

His triumph, therefore, confirms and reinforces the message behind Brexit and the rise of other Trump-like figures in the world, such as those of the European extreme-right wing parties: the National Front, UKIP, the xenophobic parties of Eastern Europe and more extreme sectors of the classic right.

A phase of greater inter-state tensions has begun. It will include significant economic and military conflicts and “solutions by force” in the face of the threat of class struggle. In this area, despite polarization, the extreme right now has the upper hand in its opposition against a timid center-left that continues to be just another variation of social-liberal parties.

This dramatic shift in the United States follows a pattern similar to that of Latin America, where the “populist” governments of the past decade have kept capitalists’ power intact and, when the crisis broke out, began to implement austerity policies, like Dilma in Brazil and as presidential candidate Daniel Scioli intended for Argentina before losing the elections to the conservative, Mauricio Macri in 2015–essentially opening the door to the right.

Trump’s rise to power is undoubtedly a symptom of US decline and a product of decades of political reaction. The fact that he was able to channel the frustration of the most regressive sectors of the working and middle classes towards xenophobia and protectionism is a warning sign, a wake-up call for the exploited and oppressed.

This leads us to one of the main conclusions that can be drawn from Trump’s triumph for those of us fighting against this capitalist society.

Obama took office under extraordinary conditions. He generated enthusiasm in a large coalition of youth, workers, women, African Americans and immigrants with the promise of a progressive reformist solution to the capitalist crisis and imperialist wars. But he let them down by bailing out Wall Street and big corporations with taxpayer money, while millions of ordinary Americans lost their houses, jobs and standards of living. Meanwhile, the union leadership has long since sold its soul to the capitalists and tolerates low-paying jobs with few prospects, like those under the “Walmart model.”

If Obama once embodied the “populist illusions” on the left, Hillary Clinton has represented the restoration of a corporate, warmongering establishment–the confirmation that there is no other choice but “politics as usual.” Neither the political bureaucracy nor the corporate media or pollsters were able to pick up on the profound rejection of this status quo that found its (extreme-right) expression in Trump.

Was this shift inevitable? Although it seemed unlikely, it was not at all inevitable. The emergence of Bernie Sanders’ candidacy during the democratic primaries was the surprise on the left. Sanders defined himself as a “democratic socialist,” even though his program was no more than a new version of the Democratic Party’s traditional redistributionist policies. He denounced Hillary Clinton as part of the elite, beholden to corporations and banks. In his campaign, he supported demands such as a $15 minimum wage. With this rhetoric, he generated enthusiasm among a new generation. He crushed Clinton among young voters below the age of 30 and won in the Rust Belt states. In the primaries, he got almost the same number of votes as Trump–nearly 14 million.

However, all that strength and enthusiasm died down and Sanders showed his true colors. Without batting an eye, he supported Clinton and forgot about the “political revolution” he had promised. He submitted to the same corporate agents he denounced in his campaign. In doing so, he handed the banners of discontent against the political class and obscene inequality over to Trump.

Historically, populist movements emerge as a response to profound crises and social and political polarization. Trump did not come out of nowhere, and his arrival was foreshadowed by the emergence of the Tea Party, the rightward shift of the Republican Party and the reemergence of a conservative right. This includes the so-called “alt right,” composed of white supremacists and similarly unsavory characters.

Trump’s rise to power is undoubtedly a symptom of US decline and a product of decades of political reaction. The fact that he was able to channel the frustration of the most regressive sectors of the working and middle classes towards xenophobia and protectionism is a warning sign, a wake-up call for the exploited and oppressed. We are witnessing a dangerous fragmentation among the working class and its allies, African American and Hispanic minorities and women.

More than ever, it is necessary to build strong, revolutionary left-wing workers’ parties to restore the unity of the exploited and oppressed on a national and international scale. This is the only political and social force capable of defeating the power of capitalists, whether they be populist demagogues like Trump or reactionaries hidden behind progressive masks like Clinton.