A caravan of trucks and cars flying Trump regalia nearly forced a Biden bus off the highway on Friday, with little interference from local law enforcement. 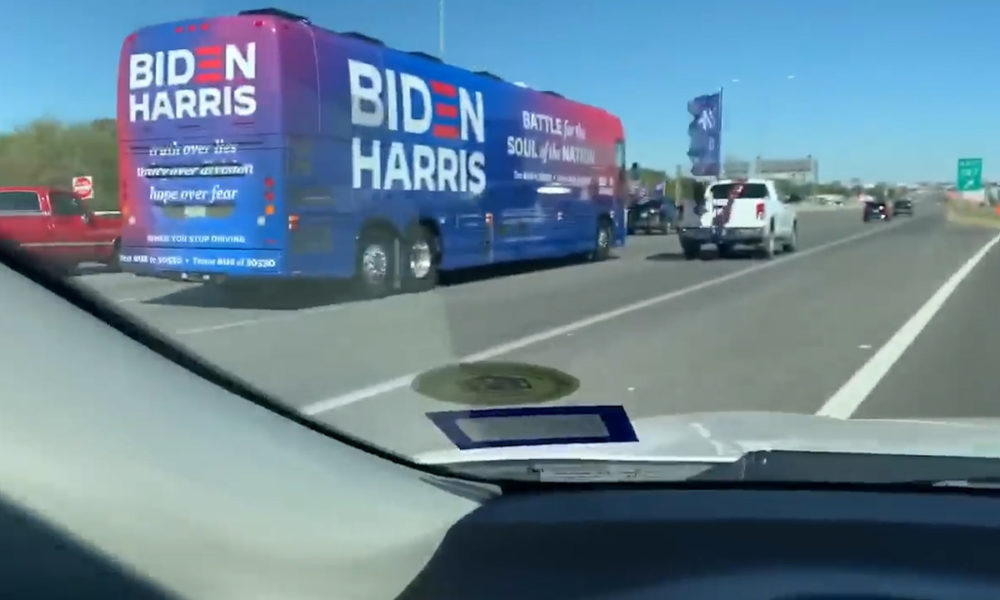 As Tuesday’s presidential election approaches, Donald Trump’s calls for vigilante intimidation and violence are being answered in increasingly overt forms. On Friday in Texas (an unexpectedly hot electoral contest this year), a caravan of up to 650 cars and trucks ambushed a Biden campaign bus traveling from San Antonio to Austin. This “Trump Train”—mostly pick-up trucks bedecked in pro-Trump, pro-Second Amendment, and Blue Lives Matter flags— surrounded the campaign bus on the highway, forcing it to slow to 20 miles per hour as staffers on board called police for help. No violence or injuries resulted, but video shows a Trump truck and a Biden staffer’s car side-swiping each other directly behind the bus. It’s unclear whether this was deliberate, or who was at fault, but accusations of incitement to violence immediately flew between Democrats and Trump supporters. Partisans on Twitter called for the driver of each vehicle to be prosecuted for attempted manslaughter; this event will become just another anecdote in each side’s litany about the malice of their opponents.

Organizers and supporters of this harassment campaign have characterized it as harmless “trolling” and an exercise of their free expression, despite the narrow avoidance of violence. When the Biden campaign canceled three later events “out of an abundance of caution,” local conservatives suggested that the Biden campaign was “playing the victim” in order to hide the real reason for cancelling: an underwhelming expected turnout. When Trump supporters celebrate intimidation campaigns like the one on Friday, their subtext is clear: threats of violence work.

Though the Biden camp cannot admit to it, both camps may have a point. The threat of violence is real, as the Democrats insist, and it likely causes a chilling effect, suppressing turnout to Biden events. However, while Trump’s supporters are seemingly driven by a profound, cultish loyalty, Biden’s tepid promise to “return to normal” inspires no such passion. What enthusiasm exists for him among the electorate is almost exactly equivalent to their dislike of Donald Trump. It is unsurprising that few Texans would expose themselves to this kind of intimidation for a candidate whose entire appeal is being the lesser of two evils.

The same subtext was clear when Donald Trump himself tweeted out a video of the caravan with the message “I LOVE TEXAS!.” By Sunday, the message had reached traditionally Democratic northeastern cities, with supporters of the “law and order” candidate shutting down large stretches of the Garden State Parkway by parking on the Tappan Zee Bridge and another caravan circling the D.C. beltway. Unsurprisingly, police took no action against the disruption in Westchester, even while the NYPD brutally attacked an anti-fascist demonstration in lower Manhattan.

This points to another disturbing tendency, one that the Democrats are also loath to acknowledge: the necessary complicity of local authorities in these events. The Texas caravan passed through the jurisdiction of at least three police forces, and in each town, the police were aware of the event before it arrived. Though the exact timeline is unclear, it appears that until the actual incidence of vehicles coming into contact, local police had no intention of intervening, telling Democratic staffers who called for help that they lacked jurisdiction in the absence of “actual traffic violations.” Of course, driving 20 miles per hour on a freeway, deliberately stopping traffic, and hemming in a large, fast-moving bus are behaviours that would, in most circumstances, be cause for police intervention.

It’s abundantly clear that police only feel constrained by such technical niceties when it is convenient. They show no such restraint when, say, a Black man is walking away or a group of protesters are walking to the polls. One Biden volunteer who asked for police assistance explicitly suggested that police sympathized with the caravan, noting the officer’s “Blue Lives Matter” scarf.

In contrast to the Democrats’ tortured attempts to appear progressive on issues of police violence while also promising to increase police funding, Trump’s support of police brutality and impunity is crystal clear, which has normalized and accelerated the concentration of right-wing reactionary fervor among police. When members of the right take to the streets to behave “lawlessly,” we shouldn’t be surprised that the police tolerate or encourage it: they know “whose side they’re on.” We shouldn’t be surprised that “harmless trolling” occasionally spills over into real violence; it has been implicitly condoned and encouraged by agents of the state. As an election approaches that will potentially be contested long after voting ends, these tactics will surely be deployed by the right ever more brazenly to seize or consolidate power. It’s more urgent than ever to take a principled stand against intimidation, threats of violence, and democracy-by-arms, without conceding any support for the police or the Democratic party.