Donald Trump tweeted out an executive order on Monday night banning immigration in the United States. This is a massive and unprecedented escalation of Trump’s xenophobic and nationalistic immigration policy. 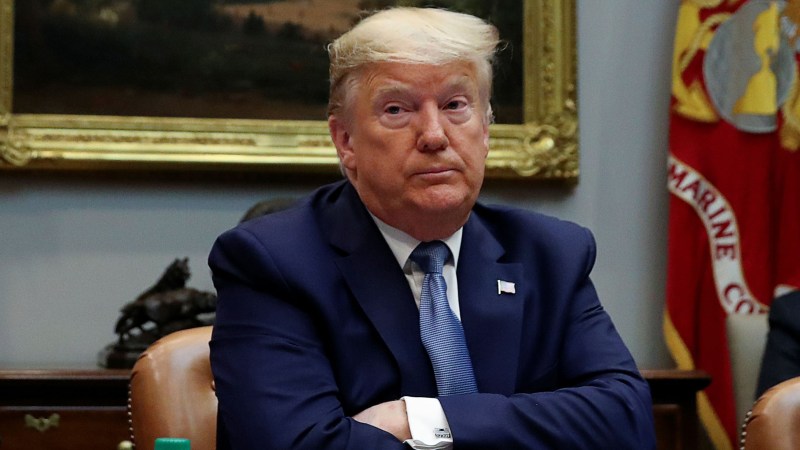 In a tweet sent out late Monday night, U.S. President Donald Trump announced that he was suspending all immigration into the United States.

In light of the attack from the Invisible Enemy, as well as the need to protect the jobs of our GREAT American Citizens, I will be signing an Executive Order to temporarily suspend immigration into the United States!

He cited the coronavirus crisis as the reason for this suspension and argued that this measure was needed to “protect the jobs of…American citizens.” This is an absolute lie. The unemployment  crisis has nothing to do with immigrants — it’s about the pandemic that the Trump administration has time and time again failed to adequately coordinate a response to, a pandemic that Trump and his friends at Fox News have said is “just like the flu.” Additionally, the fact that Donald Trump — who is currently pushing for a premature reopening of the country — would argue that he’s trying to “protect” anything but capitalist profits is ridiculous. As long as the economy is protected, he is perfectly willing to let the working class die, even the American citizens that he claims to care about.

Regardless of whether the policy goes into effect, closing the borders has nothing to do with protecting jobs. It is a bone tossed to the worst and more reactionary sectors of Trump’s base — a sector represented by the recent right-wing protests in favor of ending the quarantine — in the midst of Trump’s falling approval ratings. Trump is talking directly to these protesters, many of whom are waving confederate flags and spewing racist rhetoric. He is letting them know that he will use the pandemic to help them “take our country back” from immigrants, engaging in a vile, xenophobic “shock doctrine.” As socialists, we must resist this at every turn, especially in the middle of such an unprecedented global crisis. The workers of the world have no country, and as such, any attempt to attack immigration is an attack on the working class.

Trump’s suspension of immigration is an almost unprecendented nationalistic turn in recent U.S. immigration policy, and it is  a return of Trump’s unilateral form of governance, declaring policy changes through tweets and executive orders with seemingly no coordination with the rest of the government. The undemocratic nature of Trump’s order cannot be overstated. If the ban on immigration is put into effect, it will be the first time in recent history that immigration to the U.S. has been banned outright, a massive jump in isolationist U.S. foreign policy. Trump is using the twin public health and economic crises as an excuse to push forward the most xenophobic aspects of his agenda. This suspension of all immigration to the U.S. is the biggest escalation of xenophobia by his administration yet.

It is becoming increasingly apparent that Trump will attempt to win the upcoming general election on a platform that is even more nationalistic and white supremecist than before. The suspension of immigration goes hand-in-hand with Trump’s insistence, along with other members of the right wing, on referring to the coronavirus as the “Chinese virus” — a blatant and disgusting attempt to blame China and by extension all people of Chinese descent for the spread of a public health crisis. This has led to an increase in racist attacks against Asian Americans.

However, Trump and the Republicans aren’t the only ones attempting to utilize racist messaging around the coronavirus crisis. Democratic nominee Joe Biden also jumped into the game of xenophobic fearmongering on Saturday when he released an ad that criticized Trump for not being hard enough on China. It is becoming clear that both the Democrats and the Republicans are taking a nationalistic turn in the face of this crisis.

Yet this is not Trump’s first attempt to use the coronavirus crisis in order to push forward his racist and xenophobic agenda and score points with his right-wing base in the run up to the presidential election. Months before the border closure announcement, Trump and the Department of Homeland Security rushed plans to build the border wall between Mexico and the United States. Trump and his administration claimed that fast-tracking the construction of the wall would help stop the spread of the virus, but given that the U.S. was overwhelmed by coronavirus far sooner than Mexico, this proved to be nothing more than a thinly veiled attempt to fulfill a racist campaign promise. Construction on the border wall has continued throughout the crisis, diverting government funds that should be used to support the flailing healthcare system and unemployed workers.

Furthermore, ICE has continued to operate throughout the pandemic, increasing the spread of the virus and instilling fear in the hearts of immigrants across the United States as the agency arrests, detains, and deports hundreds of immigrants. ICE agents and guards within detention centers are exposing detainees to the virus, who are especially vulnerable to catching and spreading the virus given the unsanitary and overcrowded conditions of ICE detention centers.

Trump is correct that many are losing their jobs in the midst of the crisis. The number of new unemployment claims each week is staggering, with many more unable to claim their benefits due to outdated and bureaucratic rules. There is a real crisis of joblessness that is showing no signs of slowing down. But again, attacking immigrants is not the solution to this crisis.

Instead of blaming immigrants for taking American jobs, millions of unemployed workers who are young and not immunocompromised should be hired to do necessary jobs related to crisis relief — such as producing masks and ventilators — giving support to the frontline workers who are risking their lives everyday in grocery stores, hospitals, and distribution centers. Work hours could be distributed among everyone who is able to work, without lowering pay. Furthermore, we must demand an end to all further layoffs as the economic crisis unfolds and demand a quarantine wage for all Americans, not just those with the right papers. Through mass taxes on the wealthy and freezing all military and border wall funds, the government does have the ability to get this done.

Capitalism has proven itself time and time again to be incapable of addressing the crises that it creates, and the unemployment crisis is just another example. Now, when faced with the failures of the system, capital’s biggest defenders — the imperialist U.S. government —  are doing the same thing they always do: scapegoating the most marginalized and oppressed sectors of the working class. As Trump bans immigration to the U.S., all socialists must demand open borders and an end to the deportation and detention of immigrants.

Suspending immigration is a cynical attempt to pretend that Trump is on the side of the American working class in the midst of an election. But Trump isn’t on the side of the working class: he wants us to die for capitalist profits. Trump and the capitalists are offering up oppression and scapegoating instead of solutions. This is unacceptable, and we must organize to fight it at every turn. Donald Trump, Joe Biden, and every other politician who uses nationalism to divide people and win elections must be defeated. All of us — the unemployed, the immigrants, the front line, the furloughed, and those working from home — must unite to fight against this escalation of nationalism.