Trump Tweets Threaten Escalation in Minneapolis and Animate His Racist Base

On Friday morning, President Trump tweeted in response to events in Minneapolis that, “when the looting starts, the shooting starts.” His racist comments serve to animate his base and encourage far-right vigilantism. 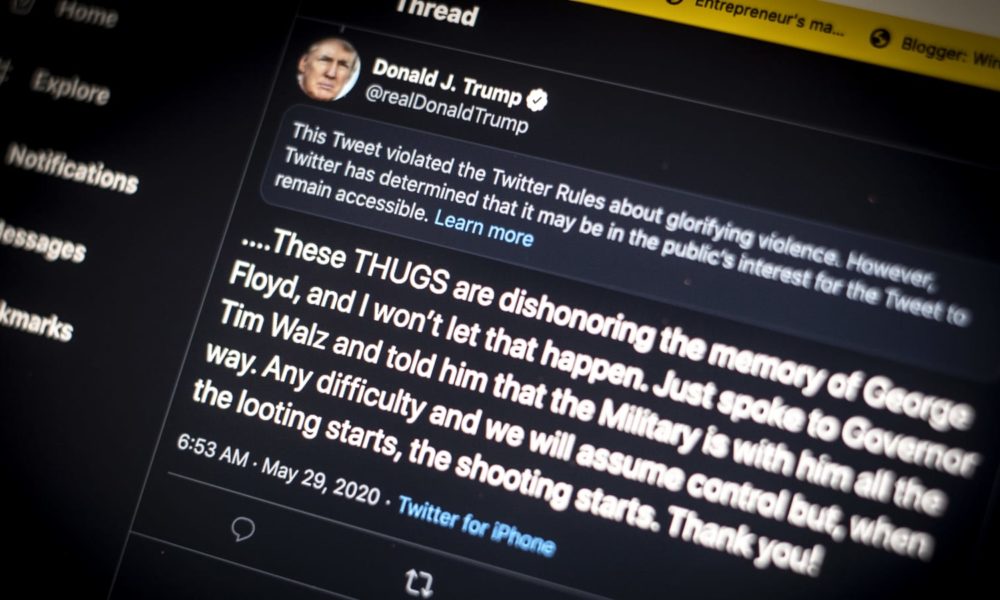 President Donald Trump broke his silence on the police murder of George Floyd in the early hours of the morning on Friday, tweeting

I can’t stand back & watch this happen to a great American City, Minneapolis. A total lack of leadership. Either the very weak Radical Left Mayor, Jacob Frey, get his act together and bring the City under control, or I will send in the National Guard & get the job done right…..

As if that wasn’t enough, he followed it up with an even more incendiary tweet (which was eventually flagged by Twitter for violating its rules about “glorifying violence”)

These THUGS are dishonoring the memory of George Floyd, and I won’t let that happen. Just spoke to Governor Tim Walz and told him that the Military is with him all the way. Any difficulty and we will assume control but, when the looting starts, the shooting starts. Thank you!

While it is not surprising that the man who argued that there were good people “on both sides” during the Neo-Nazi rally in Charlottesville offered an unsympathetic response to those fighting against racist violence, it is notable that he is explicitly proposing a violent escalation of police repression.

The scene in Minneapolis is incredibly volatile with protesters taking the streets in the thousands to express rage at the murder of George Floyd and the racist institution of policing, and demand that all four officers involved in the murder be arrested. As protesters are becoming increasingly militant in their fight, the Mayor of Minneapolis and the Governor of Minnesota — both of whom are Democrats — have escalated the police presence, sending in 500 members of the National Guard to aid in putting down protests. The shocking arrest of a CNN reporter and his entire crew on live TV on Friday morning is a blatant example of the intense police repression protesters are experiencing.

The threat of escalation from Trump is concerning on two fronts. First, his threat to send in even more military personnel to Minneapolis would undoubtedly lead to more violent confrontations between the state and protesters. And second, the tweet sends a clear message to his base, tacitly encouraging the white vigilantism that has already begun in Minneapolis.

As we saw with the actions of “Liberate Michigan” and others, Trump will often use his twitter account to speak directly to the more extreme sectors of his base, which includes white supremacists and other right-wing extremists. His incendiary tweets on Friday morning were framed as being a critique of the “Radical Left” mayor of Minneapolis, a preposterous statement given that the Mayor called for the National Guard to be used to repress protesters, and only arrested cop killer Derek Chauvin four days after the murder. ) The tweets were actually directed at the vigilantes who took to the streets of Minneapolis armed with guns and chainsaws, claiming to protect the businesses of Minneapolis from looting. While no violence between these vigilantes and the protesters was reported, the tensions were clear and Trump’s tweet gives the vigilantes permission to attack protesters.

This is just the latest tactic in Trump’s electoral strategy of animating his base. From his explicit support of the protests to re-open the country, to his executive order banning all immigration, to this new tweet — littered with racist dog whistles and an explicit call to violence — Trump’s strategy to combat his falling poll numbers is clear: whip up his racist and far-right base. As the situation in Minneapolis and all over the country develops, Trump’s tweets could have deadly consequences.

The protesters who are taking the streets of Minneapolis and other major cities despite the risk of Covid-19 and police repression are showing incredible bravery and willingness to fight. Time and time again, politicians rub their hands and issue empty platitudes about the need for investigations when these killings occur, yet nothing gets done. There is video evidence and many eye-witnesses of Floyd’s murder. Yet, it took days of protest to get only one of the cops arrested; the three other cops who were involved have not been charged. We must give our support and solidarity to these protests wherever they are happening, as there will likely be a massive increase in state repression that will undoubtedly go hand in hand with an increase in white vigilantism. Trump’s racist and dangerous tweets are just the latest example that he, and the rest of the capitalist state, are allied with white supremacists against people of color. As the election draws nearer, we will almost certainly see more and more tweets of this nature from Trump as he tries to mobilize his base to improve his election prospects.