On Tuesday, President Trump visited Kenosha, Wisconsin, one day after defending the right-wing vigilante who murdered two protesters. The trip serves to animate his right-wing base ahead of elections and squarely position himself as the “law and order” candidate. 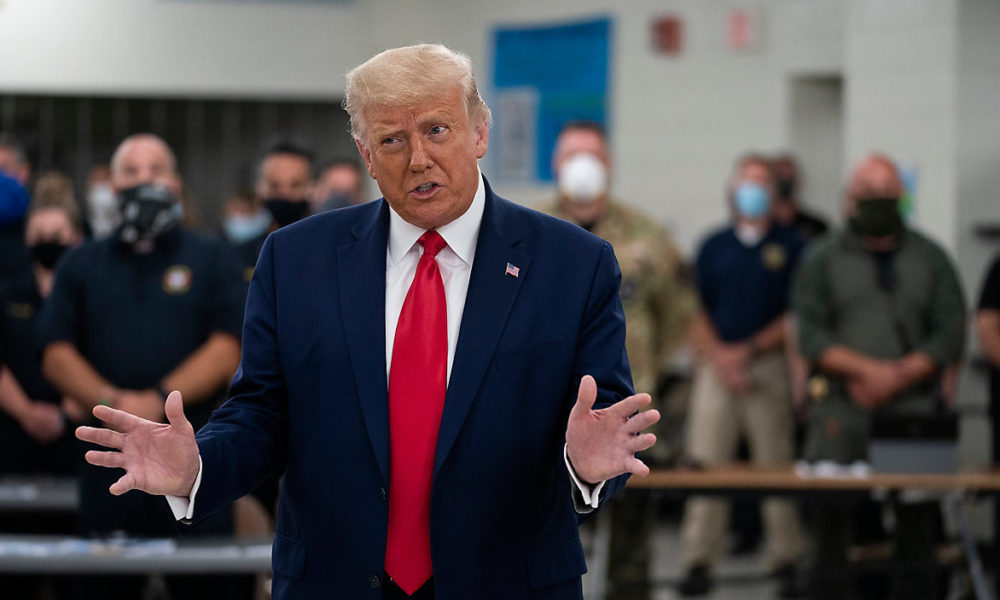 On Tuesday afternoon, President Trump visited Kenosha, Wisconsin, the site of recent uprisings against the violent police shooting of Jacob Blake. During the visit, Trump decried the protests as “domestic terror” while promising more funding for the police. The day before, he had defended the 17-year-old far-right gunman who killed two protesters in the city. His rhetoric and behavior are an attempt to animate his racist base and position himself as the “law and order” candidate amid growing tension across the United States. The actions are dangerous and all but guarantee further escalations. Any escalation must be fought by a movement of oppressed groups and the working class.

On August 23, police officers shot Jacob Blake, a 29-year-old Black man, seven times in the back as he was getting into his car. Since then, Kenosha has been the epicenter of demonstrations, with police and right-wing groups both repressing antiracist protesters. Two nights after police shot Blake, Kyle Rittenhouse, a 17-year-old far-Right vigilante, killed two protesters with a semi-automatic rifle. Rittenhouse, a fan of Trump and Blue Lives Matter, had travelled from 40 minutes away in neighboring Illinois to patrol the streets of Kenosha and protect property. Video footage from the evening shows the police interacting with armed right-wing forces, including Rittenhouse, giving them water and thanking them for being there.

After killing two protesters, Rittenhouse walked past police with his hands up. Despite demonstrators yelling that he had just shot someone, he was not apprehended — he returned home that night and was only arrested on the following day. The police’s treatment of Rittenhouse is in stark contrast to their horrific treatment of Jacob Blake, whom they shot over and over as he opened his car. It is also jarring when compared to the murders of Breonna Taylor, George Floyd, Atatiana Jefferson, Philando Castile, Tamir Rice, and countless other victims of police brutality. However, the cops’ actions are consistent with their role as the armed, repressive wing of the state, whose very purpose is to protect capital and private property. Cops also have a long, intimate history with right-wing militia movements, with whom they often work hand-and-glove.

At a press briefing on Monday, Trump was asked whether he would condemn Rittenhouse, but declined to do so. He instead implied, contradicting the video evidence, that Rittenhouse was acting in self-defense, responding, “He was trying to get away from them, I guess, it looks like. I guess he was in very big trouble, he probably would have been killed.” Trump likewise declined to condemn the cop who shot Jacob Blake. In an interview with Fox News host Laura Ingraham that evening, he said that police officers “choke” when they are “under siege,” and likened the shooting to missing “a three-foot putt” at a golf tournament.

Over the weekend, Trump decided to visit Kenosha on Tuesday as part of a “unifying” visit. Wisconsin Governor Tony Evers and Kenosha Mayor John Antaramian, who are both Democrats, asked Donald Trump not to come, writing in a letter that a visit would “hinder our healing.” Trump waved away their concerns, and instead argued that a visit to Kenosha could “increase enthusiasm and … love and respect for our country.” He did not have plans to visit Jacob Blake’s family. Blake’s father, Jacob Blake Sr., said, “This is not politics. This is about the life of my son,” and had no interest in speaking to the president.

In Kenosha, Trump surveyed property-damaged areas with Attorney General Barr while a mix of Trump supporters and protesters lined the streets. After his tour around the affected neighborhoods, he attended a roundtable event with business owners and police officers at which he condemned the protesters and said, “Kenosha has been ravaged by anti-police and anti-American riots … These are not acts of peaceful protests, but domestic terror.” Trump then promised $1 million for the Kenosha police department, $4 million to help rebuild businesses, and $42 million for cops and prosecutors across Wisconsin. Notably, Trump did not mention Jacob Blake a single time. He believed that his visit was helpful “because I’m about law and order.”

Biden correctly claimed that Trump was “stoking violence” through his comments and his visit to the city; however, Biden is trying to out-do Trump in pro-police, “law and order” rhetoric. In response to the Kenosha uprising, Biden said, “Rioting is not protesting. Looting is not protesting. Setting fires is not protesting. None of this is protesting, it’s lawlessness, plain and simple, and those who do it should be prosecuted … Do I look like a radical socialist with a soft spot for rioters?” He plans to air an ad condemning the protest. Likewise, Democratic governors and mayors have used the same repressive tactics that Trump advocates. The mayor of Kenosha even called in several hundred National Guard members in response to the protests. Neither Democrats nor Republicans are friends of protesters or movements against racism and police brutality.

Trump’s visit to Kenosha and defense of both Rittenhouse and the Kenosha police serve several purposes. Wisconsin is a key swing state for the November presidential elections — in 2016, Trump carried the state by a margin of less than one percent against Hillary Clinton. The visit can be seen as an attempt to gain a foothold in the state. However, the visit also served to strengthen Trump’s position as the “law and order” candidate more broadly. Against the backdrop of protests in Kenosha, as well as in Portland, Trump hopes to garner support from undecided voters who are fearful of what is unfolding in cities across the United States.

Finally, his visit and statements serve to animate his right-wing base and encourage vigilantism. As with his previous incendiary comments — such as “When the looting starts, the shooting starts” — he is trying to whip up his racist and far-right base amid a tightening race with Joe Biden. By defending Rittenhouse, refusing to mention Jacob Blake, and visiting Kenosha to pledge support for police and decry property damage, Trump is signalling his allegiances to the racist, repressive arm of the state and right-wing vigilantes. This polarizing campaign is dangerous, and will likely lead to further violence and repression. The working class and oppressed groups will need to unite in a powerful movement, and must resist co-optation by the Democratic party.