Trump vs. Biden: A Debate That Shows the Empire’s Decline

The presidential candidates clashed in the first of three debates. The debate was worse than expected, a clear sign of the decline of U.S. imperialism. 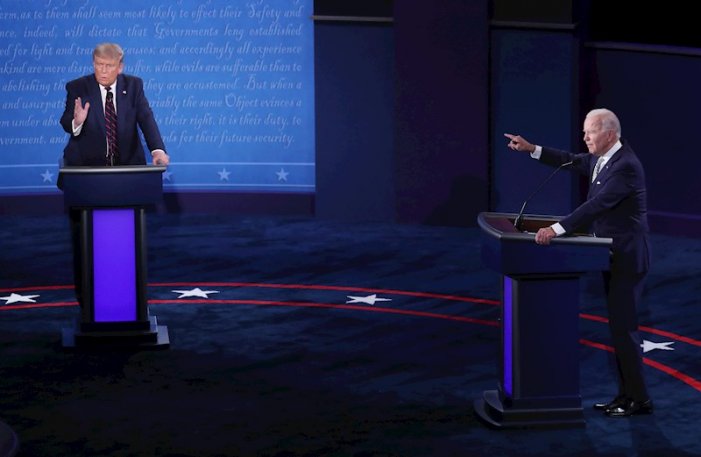 “Donald the Clown” and “Sleepy Joe” could well be two characters from some sitcom of the 1960s. But they are not. They are Donald Trump and Joe Biden, the two candidates that the U.S. bourgeoisie has chosen to compete for the White House. One of them will hold the presidency for the next four years and, from there, help shape the destinies of world capitalism, at least until another crisis seriously overshadows the decadent American empire.

The mediocre debate was  concerning to imperialist capital, which is fearful of the dangerous situation posed by the economic crisis, the pandemic and also class struggle.

As the Wall Street Journal ironically points out, no one expected a debate like that of Lincoln-Douglas, but even for those who had very low expectations — that is, almost everyone — the first Trump-Biden debate was too much.

Almost out of habit, the big media columnists chose their winners and losers. But given the debaters’ poor performance, the results were almost entirely partisan. In short, according to liberal pundits, Biden won, while most Republicans claimed Trump had outperformed his rival. At this point, those still undecided make up barely 3 percent of those who will vote, so the real impact of the debate would seem to be quite small.

The tone was set by Trump, who, as expected, behaved more like a bulldozer than a president. He bullied Biden. He interrupted, went on a personal attack, went off script, knowing that this transgressive and offensive style would appeal to his base.

Liberal analysts have argued that Biden won just because he maintained his composure for 90 minutes. The yardstick by which he was measured is that he successfully counteracted one of Trump’s favorite campaign points, which is that Biden is senile. It wouldn’t be the first time that a president’s mental health became a matter of state. It’s an open secret that Ronald Reagan, who until Trump’s election was the oldest president when he took office at almost 70, was already suffering from Alzheimer’s in his second term, and that his policies were designed by his neoconservative advisors. But before falling into dementia, he had had enough counterrevolutionary lucidity to launch the neoliberal offensive that would eventually win the Cold War for the United States. In any case, the bourgeoisie and the Democratic Party have guaranteed themselves some insurance with Kamala Harris as vice president.

Trump’s rhetoric in the debate was consistent with his larger long-term electoral strategy. In the first half of the debate, Trump addressed the conservative electorate that oscillates between Democrats and Republicans. With an eye on the suburban vote and the “soccer moms,” he tried to show that Biden is a puppet of the “extreme left” of the Democratic Party and that he takes his marching orders not from Wall Street but from Bernie Sanders. He accused him of trying to “socialize” the health care system, of not adhering to the mandate of “law and order,” and of refusing to fight “Antifa” and the supposedly violent mobilizations against racism and the police. Biden, as expected, overreacted to the accusation of anything that might be construed as left — he claimed to have won the ideological battle against Sanders (“The Democratic party is me,” he said), defended the private health care system, and condemned violence.  Once Biden said this, Trump took a 180-degree turn. He attacked him as punitive and racist and said the obvious: that Biden had just lost the left electorate.

Biden’s strategy, meanwhile, was to play it safe: to appear as a moderate and reliable person to lead the empire; to criticize Trump’s handling of the coronavirus pandemic; to try to take advantage of liberal public opinion’s rejection of Trump’s narcissism; and to trust that lesser evilism will guarantee him the votes of all but the most radical right-wing sectors without compromising the politics of the establishment and Wall Street.

In the midst of a crisis of historic dimensions opened up in 2008, the Democratic candidate barely mentioned the more than 200,000 deaths from the Covid-19 pandemic and the millions who have lost their jobs. While he did get in a few digs about “billionaires” who play golf, the general strategy was to present himself as the guarantor of the stability and legitimacy of the capitalist state. That implies everything from recognizing an eventual Trump victory, in a head-to-head, to accepting the nomination of the ultraconservative Amy Coney Barrett to the Supreme Court even before the November election. Barrett’s arrival on the court would give Republicans a 6-3 majority for perhaps a decade. This is a historic advantage that conservatives may very well wind up using to seize state power.

Beyond the din of accusations and insults, the debate has exposed the depth of the political crisis — whose roots go back to the Great Recession of 2008.

The first aspect of this political crisis is that the legitimacy of the electoral process is in question. Trump spoke openly of the possibility of “fraud.” He stressed the vulnerabilities of absentee voting, a mechanism that several states have already adopted for years but that will become widespread in this election because of the pandemic. And no one was able to wrest from him a commitment that he will accept the result of the election. On the contrary, the president actually called for the “extra-parliamentary mobilization” of “vigilantes” and extreme right-wing supremacist groups, such as the Proud Boys, who have already violently attacked Black Lives Matter demonstrations.

Biden is betting that the negative consensus against Trump will give him a victory. So far, the polls have proved him right. He maintains a national advantage of seven points on average, although the election is indirect and the key to the White House is held by a handful of swing states. In these states, Biden is moving forward, but by a smaller margin than the polls gave Hillary Clinton in 2016, an election that ended with Trump losing the popular vote by 3 million but still winning the Electoral College.

The big corporate media, the U.S. political establishment, and even the world bourgeoisie consider this a crucial election, one that could put an end to the Trump experiment and reestablish the coordinates of the “multilateral liberal order” and some semblance of stability in the framework of the crisis deepened by the pandemic.

A Trump victory would undoubtedly radicalize the tendencies toward political and class struggle that have already been outlined. It would also polarize the geopolitical scene. An eventual Biden government, on the other hand, would embolden a broad left flank of youth, workers, African Americans, and Latinos who consider themselves “socialists” and were the basis of the “Sanders phenomenon” and the anti-racist and anti-police phenomenon.

All this suggests a precarious situation and supports the tendencies toward organic crisis in the main imperialist power. The debate showed two contenders who do nothing but reaffirm the signs that American power is declining.