Trump’s Federal Officers Are Kidnapping and Brutalizing Protesters in Portland

Over the past week, federal agents in Portland have fractured a protester’s skull and kidnapped protesters in unmarked police vehicles, only to let them go later.
CW: Police violence, graphic depiction of injuries 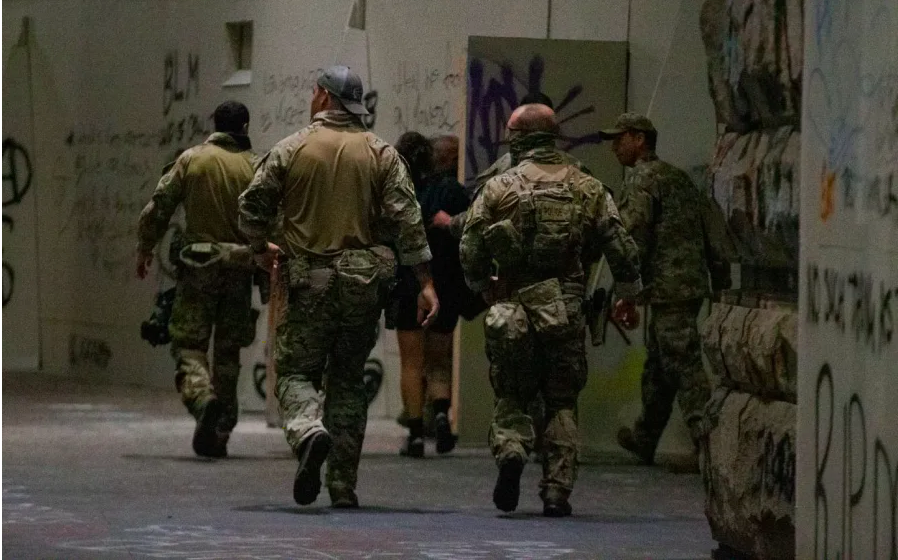 David Killen / The Oregonian via AP

On July 11, Donavan LaBella, 26, was shot in the head with an impact munition as he stood at a protest holding a speaker over his head. “It caused a pretty deep laceration, but he was bleeding from his nose, his mouth, his ears—it was pretty bad,” Jessica Shifflett, a woman who helped LaBella after he was shot. Videos show protesters rushing to his side, while federal officers stood by.

LaBella’s skull was fractured and he has undergone multiple surgeries and procedures over the past days. The hospital had to put a tube in his skull to drain the blood, and bones in his face were shattered. Donavan LaBella’s mother said in the post, “He still has some impulse control and confusion, but is slowly getting better. It is still unknown if there will be any lasting neurological damage, only time will tell. Thank you everyone for all the support and well wishes.”

This could have been the work of local police, but it wasn’t — It’s the work of federal agents. U.S. Marshals Special Operations Group and Customs and Border Protection’s BORTAC (Border Patrol Tactical Unit) were deployed to Portland by President Trump to stop protests and “protect federal property.”

However, it’s hard to argue that LaBella was threatening property by holding speakers over his head.

This comes as the Black Lives Matter movement approaches the two month mark of street mobilizations. The New York Times claims tha this may be the biggest movement in all of US history. But, as the protests begin to wind down and get less coverage in the media, there are still people fighting. And those people are being criminalized and brutalized– and in the case of Portland, federal agents are being sent in to scare people into staying home.

“We are aware of the incident that happened on July 12 near the Hatfield U.S. Courthouse where an individual was injured while U.S. Marshals were securing the perimeter of the federal courthouse,” U.S. Marshals spokesperson Nikki Credic-Barrett said. “The U.S. Marshals Service takes all injuries potentially arising from use-of-force very seriously. The incident is currently being investigated, and more information will be released as soon as possible.”

Donald Trump spoke about this early in the week. “It was out of control. The locals couldn’t handle it,” Trump said, speaking to the acting head of Homeland Security Chad Wolf. “And you people are handling it very nicely.”

To Trump, “handling it very nicely” includes not only fracturing skulls, but kidnapping protesters in unmarked cars.

On July 15, Mark Pettibone and his friend Conner O’Shea had been at a Black Lives Matter protest, like millions of people around the country. As they walked home, an unmarked minivan pulled up “I see guys in camo,” O’Shea said. “Four or five of them pop out, open the door and it was just like, ‘Oh shit. I don’t know who you are or what you want with us.’” They had been warned just a few minutes earlier about the minivan — they weren’t the only ones kidnapped that night.

In fact, there are multiple videos showing officers driving up to people, forcing them into the van and driving off.

Mark and Connor thought these were the neo-fascists who have a huge influence in Portland— after all, they usually wear military outfits and harass protesters. “I was terrified.” Pettibone told the Washington Post “It was like being preyed upon.”

But this wasn’t the work of the Proud Boys. It was Trump’s federal agents, “protecting federal property.” But Pettibone and O’Shea weren’t on federal property, much less defacing it. They were just walking home.

“I am basically tossed into the van,” Pettibone said. “And I had my beanie pulled over my face so I couldn’t see and they held my hands over my head.”

Federal officials have charged at least 13 people with crimes related to the protests so far. It’s not clear how many others have been arrested and released, like Pettibone.

Pettibone and O’Shea were taken to a building — which they later discovered was a federal courthouse — and searched, then put into a holding cell. Finally, they were read their Miranda rights and were asked to waive those rights in order to be questioned. They refused.

In fact, the U.S. Marshals deny that this even happened: “All United States Marshals Service arrestees have public records of arrest documenting their charges. Our agency did not arrest or detain Mark James Pettibone.”

“You have laws regarding probable cause that can lead to arrests,” said Juan Chavez, a director at the Oregon Justice Resource Center. “It sounds more like an abduction. It sounds like they’re kidnapping people off the streets.”

These acts are particularly egregious as these federal agents are the direct arm of the Trump administration, acting to intimidate and repress the movement for Black Lives. They are the embodiment of the hate speech spewed by Trump over the past weeks against protesters and Black people and their goal is to scare people into going home. Local officials have asked Trump to pull the federal officers out of the city; however, these local officials have also allowed police to brutally repress protesters by running them over with cars, using tear gas, and maiming and killing people. In Portland, it got so bad that a temporary restraining order against police use of tear gas was taken out.

The racist character of the state is exceedingly obvious as this repression has never been unleashed on the alt-right in Portland— known as the “epicenter of far right violence”. They don’t get kidnapped off the streets and driven around in unmarked cars. Rather, the police, federal agents, Democrats, and Republicans are united in their repression of the Black Lives Matter protests.

We must be united in our fight against police and federal repression: To abolish the police and all instruments of state repression. To free all political prisoners that the state wants to make an example of. And we must  fight against this racist capitalist system built on violence against the working class, oppressed and everyone who stands up to say that Black lives matter.