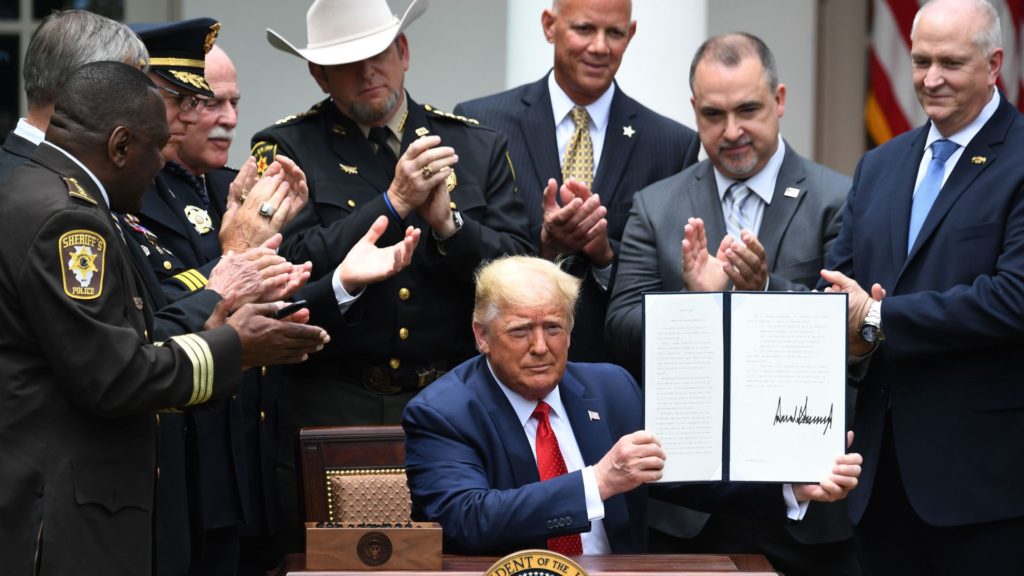 June 16 marked 22 days since the brutal murder of George Floyd at the hands of Minneapolis police. The viral video of Officer Derek Chauvin with his knee on Floyd’s neck unleashed a rage accumulated by generations of Black people who are persecuted, tortured, and killed by police and white supremacist vigilantes. The mobilizations quickly spread around the world, making it clear that both racism and police brutality are endemic to capitalism.

Donald Trump has responded to the protests by calling for “law and order,” ordering governors to control the situation, and threatening to send the army in to suppress protests, provoking widespread opposition from the military, politicians, and the public alike. Since the protests began, Trump has lauded the police and vilified the protesters and their demands. He has called protesters “thugs,” suggested they be shot, and called on his right-wing base to combat the mobilizations. Claiming that police terror can be attributed to a few bad apples, Trump is doing everything he can to protect a pillar of U.S. racism.

Meanwhile, the U.S. political establishment has been slow to formulate a response to the protests. The first to react were the Democrats who, with former President Barack Obama as their mouthpiece, are trying to channel discontent to the ballot box. In a widely-viewed speech, the first Black president in U.S. history urged the millions of people outraged by Floyd’s death to vote for Joe Biden, a politician whose history of segregationist politics and racist ramblings are well-documented.

As the mobilizations spread across the country and Trump declared war on protesters, Biden began to pull ahead of Trump in some polls ahead of the November election. With Trump’s reelection under threat, the Republican Party is beginning to shift its party line, trying to decompress the situation with certain concessions. While Trump insists on law and order from the confines of the White House, the Senate announced that it would introduce a police reform bill spearheaded by Tim Scott, the only Black Republican Senator.

On Tuesday, with the blessing of the police unions, Trump signed an executive order that provides a set of federal incentives to encourage police departments to adopt new “best practices” for their officers, including prohibiting the use of chokeholds to restrain detainees. However, to protect police impunity, the ban makes an exception for “life-threatening” situations.

The executive order also includes incentives for police departments to hire social workers to accompany police officers who respond to calls involving people with mental illness — because, in America, those with mental illness are not treated, they have the police called on them. Twenty-five percent of those shot by police in a six-month period in 2015 were experiencing a mental health crisis.

In his announcement speech, Trump stated that he was “encouraging police departments nationwide to adopt the highest professional standards to serve their communities.” Of course, these are nothing but empty words in a sea of pro-cop rhetoric. Trump did not say a word about police abuse or systemic racism in the United States, instead praising “very good and great police officers” and honoring officers who are killed “in the line of duty” each year.

In short, the entire performance is an insult to the Black community and the oppressed people of the U.S. as a whole. Even as a majority of the population demands justice for the victims of police brutality and an end to institutionalized racism, Trump is protecting cops and the racist laws they enforce.

These toothless “suggestions” for policing standards have garnered widespread outrage from broad sectors. Unsurprisingly, Democrats are taking advantage of the occasion to pose as progressives pushing for large scale police reform, but it is a hard sell with Joe Biden as their candidate for president. They are placing all their hopes on finding an attractive option for vice president to put on the ticket next to Biden. One of those possibilities is “Kamala the Cop” Harris, a California state senator and former state attorney general, who made her career by imprisoning people of color. Another candidate is Keisha Lance Bottoms, a Black woman and current mayor of the city of Atlanta, where police just shot Rayshard Brooks, a 27-year-old African-American, in the back. Both have come out against cutting funding to police departments; neither will fight for the change and justice that protesters are calling for in the streets. From Obama and Biden to James Clyburn, the Democrats are struggling to disguise the fact that they too are against the movement’s central demands.

Trump’s executive order, a slap in the face to the tens of thousands of people demanding change across the country, makes the state’s allegiance to the police explicit. “I strongly oppose the radical and dangerous efforts to [defund], dismantle, and dissolve our police departments,” he said during the press conference, echoing one of the movement’s most vocal demands, to defund the police. His executive order is further proof that Trump is fully on the side of the racist police and the racist system they protect; the state will do nothing to stop the deaths of Black people at the hands of law enforcement and everything to stop the movement in the streets. Neither party can offer a real alternative to police brutality, racism, and all other forms of oppression — because it’s about changing the system, not reforming it.