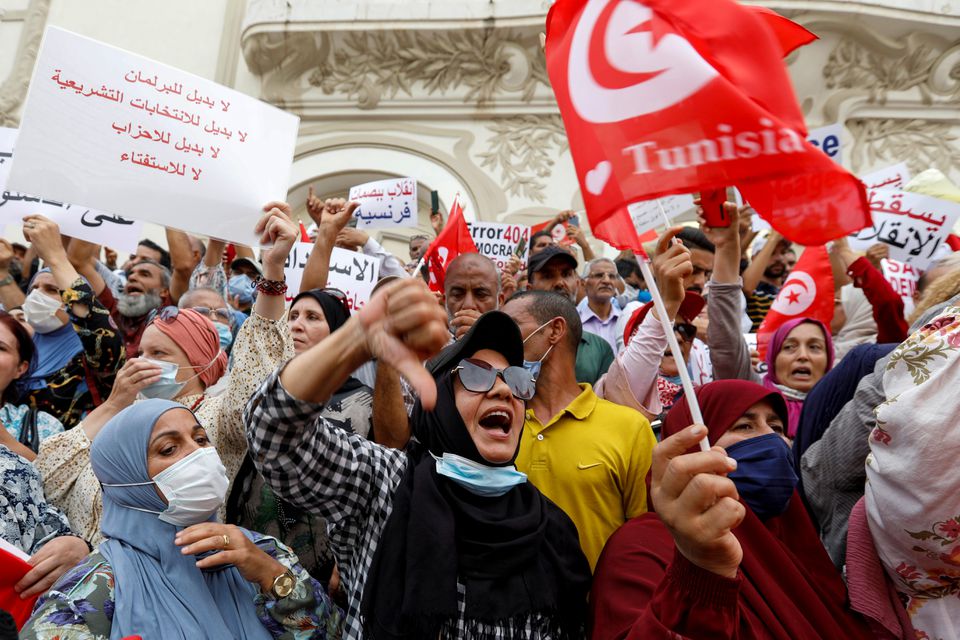 Protesters have taken to the streets of Tunisia’s capital, Tunis, in a public rejection of President Kais Saied’s decision to increase his powers.

Thousands of people demonstrated in central Tunisia on Saturday, chanting “Shut down the coup,” “We want to return to legitimacy,” and “The people want the coup to fail.” Many were also carrying banners calling for the restoration of parliament and democracy.

The protest was met with a heavy police presence on Habib Bourguiba Avenue. It was the first major demonstration since Saied declared on July 25 that he was dismissing the prime minister, suspending parliament, and assuming executive authority: moves that his opponents have labeled a coup d’état.

The boulevard was an epicenter of the 2011 Arab Spring protests in response to the overthrow of ruler Zine El Abidine Ben Ali, and has a strong symbolic presence in Tunisia’s political imagination.

The president, a former constitutional law professor, justified his decision by citing emergency measures in the constitution. However, his critics and many legal scholars said that they still did not support his intervention.

Last week, one of Saied’s advisers told the Reuters news agency that the president was planning to suspend the constitution and offer a reformed version through a referendum, sparking opposition from political parties and the powerful UGTT labor union.

While many Tunisians welcomed Saied’s decision to dissolve the deeply unpopular parliament, his inability since July 25 to appoint a prime minister or offer any long-term plan has led to growing frustration.

Kais Saied has justified his actions by calling them a “course correction” after large demonstrations erupted across the country in July challenging high unemployment, corruption, and what was seen as an ineffective political class.

You might be interested in: Coup in Tunisia: Not What the Arab Spring Revolutionaries Had in Mind

On Tuesday, Saied said he would not “deal and negotiate with agents and traitors and those who pay money to disrespect their country.”

Worries are growing, both internally and from the international community, that Tunisia may lose the rights and (bourgeois) democratic system it gained as a result of the 2011 mobilizations that sparked the “Arab Spring” and overturned the regime of Zine El Abidine Ben Ali.

Human Rights Watch (HRW) and the Tunisian Association for the Defense of Individual Freedoms have issued warnings of increased “arbitrary and politically motivated acts of repression” after July 25.

Eight weeks later, Saied has yet to appoint a prime minister. He has rejected accusations of a coup, and portrayed his moves as an opportunity to purge the government of a corrupt elite.

While triggering a constitutional crisis and sparking accusations of a coup, Saied’s moves were initially widely popular in a country suffering from economic stagnation and political paralysis. The political system that emerged after the Arab Spring failed to address the country’s structural needs.

Gross domestic product (GDP) fell by 9% last year, commodity prices have soared, and a third of young people are unemployed. It is therefore not surprising that most of the demonstrators who clashed with the repressive forces in recent days are mostly young people and teenagers. These youth saw that the fall of Ben Ali did not change their material or living conditions, and can only envision a bleak future ahead.

In this sense, Saied took advantage of the political weakening of parties such as Enahda (Renaissance) to roll back the limited democratic rights gained during the Arab Spring. This authoritarian turn, however, cannot address the grievances of the millions living in poverty, and will only lead to further repression.

First published in Spanish on September 18 in La Izquireda Diário.