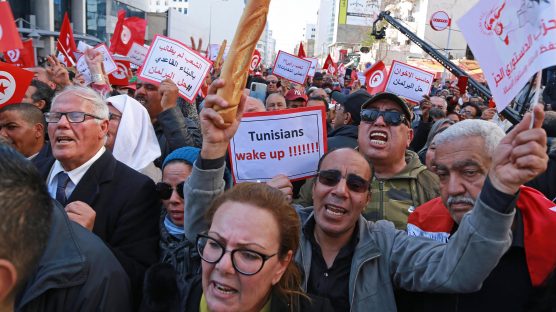 Hundreds of Tunisians took to the streets on September 25 in opposition to inflation and food shortages. The North African country has already been undergoing massive protests for a year against President Kais Saied’s power grab. The costs of living protests in Tunisia are part of a growing opposition to austerity throughout the Global South.

At the direction of the International Monetary Fund (IMF), the Tunisian government raised fuel prices for the fourth time this year. The recent price hike on cooking gas cylinders was the first of its kind in 12 years. The 14 percent increase sparked protests in the working class Douar Hicher district of the country’s capital. The protesters raised bread in the air, burned tires, and chanted “Where is Kais Saied?”

Tunisia has been the site of dynamic class struggle for the last decade. Since 2011, the IMF has been squeezing the Tunisian working class, pressuring the government to erode food and energy public subsidies, especially on wheat. This is important historically because of the 1983-84 bread riots, which were also the result of an IMF austerity program.

In 2011 Tunisians overthrew their former dictator, Ben Ali, during the Arab Spring. The elections that followed brought Ennahdha to power, an Islamist Muslim Brotherhood party that continued many of the same policies of Ben Ali and allowed many of the same officials to rule. This new regime has been unsuccessful at fully co-opting or suppressing the demands of the Tunisian working class and poor. It has maintained austerity measures at the direction of the IMF and attempted to maintain power through police violence. In 2021 President Saied enacted a coup in which he suspended parliament and dismissed the country’s prime minister. Earlier this year Saied passed a new constitution for the country which solidifies executive power in the president.

Along with these political crises, North Africa is one of the regions most at risk of famine due to the compounding crises of recession, supply chain disruptions fueled by the war in Ukraine, and worsening climate change. Sugar in particular is scarce in the country, leading protesters to chant “Where is the sugar?” Tunisians have used social media to highlight the empty shelves at supermarkets and many have reported they spend hours searching for sugar as well as milk, butter, cooking oil, and rice.

Riot police responded to protests with tear gas, but police violence is unlikely to deter protesters who have already spent years resisting state violence with working class methods. Along with protesting in the streets, public sector workers in Tunisia have experience striking to fight for their demands.

Tunisians are not alone. From Haiti and Argentina to Ghana and Indonesia, countries around the world subjugated by imperialism are resisting the class warfare of the IMF and their national bourgeois governments. As the world heads into a recession, class struggle is on the rise. It is essential for workers and socialists to show solidarity with uprisings against austerity whenever and wherever they happen. Protests will become more powerful if the leaders can unite their movements across borders, develop working class leadership, and coordinate struggles internationally.