‘Twas the Night Before Christmas…After a Socialist Revolution 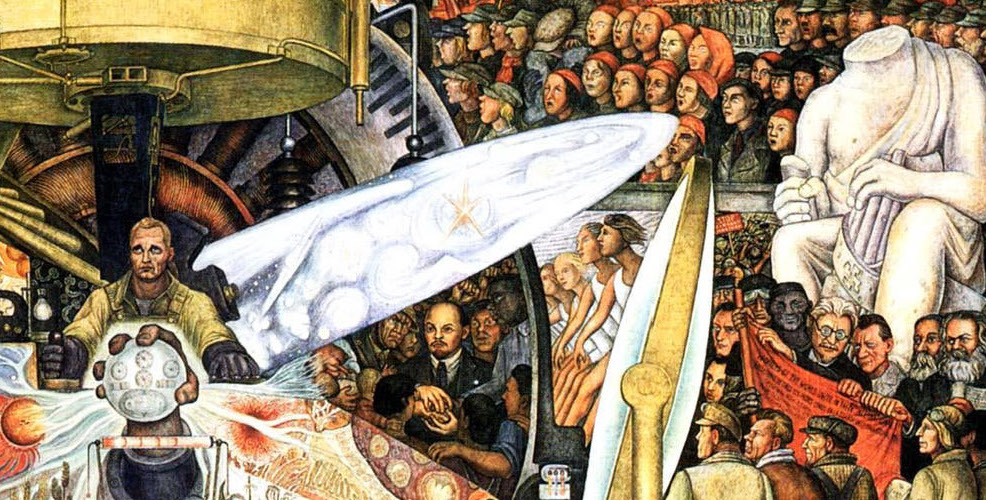 Image: Man at the Crossroads by Diego Rivera

‘Twas the night before some Christmas
And in every place
The future socialist revolution saved the entire human race
And Christmas was filled with happiness, solidarity and joy
Children worldwide sang, got and shared their toys

And words like “double shift”and “overtime” disappeared
Instead it’s not work we make crafts, gifts and cheer
Because under socialism no one works more than 20 hours a week tops
‘Cause under capitalism we work more hours to make money for the boss

And the elders would sit by the fire and lean in for effect
To talk about the days of past capitalist neglect
And the children would look sideways noses turned up with a sneer
You told stories about enslaved “little people and beat reindeer”?
The elders would say “yes but real life was much worse”
When being gay, a woman, immigrant, dis-abled or Black was a curse
And when the police crept through the hood people scattered away like mice
Afraid of being beaten, shot or raided by ICE

There were always cut backs on services but on top of that the government hitched
Taxes, fees—our schools they’d seize—defending the gluttony of the rich
And there were many empty homes while people slept in the street
Stores fill with food but which the starving could not eat
And the government dropped bombs like piñatas falling from the skies
Killing for power and profit and control spewing patriotic lies
And the working class felt helpless and most worldwide were oppressed
Till we got fed up and kids—you all know what happened next

We made the revolution organized in every place
At work at school with every gender, ability, every race
Every oppressed person got involved took leadership in the fights
And the Molotov cocktails blazed like ornaments in past Christmas nights
The barricades were filled with discussion, debate, action and resolve
For we had to win this war quickly for humanity to evolve
And we always honor our dead comrades freed all political prisoners in jail
We had the unwavering confidence the working class would prevail

So now there some traditions we tweak or keep and some traditions we burn
But fighting bigotry and exploitation always we’ve had to learn—
That Christmas is only another excuse for us together with pride
That we defeated the beast everywhere without question worldwide.

No more fearful Brown and Black immigrants, women, queers and youth
No longer are people jailed or killed for loudly telling the truth
And all walk the streets at night loving without shame
Because the love of money is the only love that dare not speak its name
And we don’t need money-food, shelter, and healthcare are a guarantee
Life will never be perfect but at least now we are free.

So fight on comrades for victory from Cairo to Van Nuys
From Mexico to Greece, fight the police don’t believe the bosses lies
And tell young and old how you won the battle so we prepare to win the war
To eliminate this capitalist imperialist system against the working class and poor
Sit down with comrades on Christmas day and organize for how it will be
When we can look back in relief on those days when we weren’t free
And those days are not far off if we continue to do what we do
And recruit more to revolutionary theory and practice against the greedy few

Sigue! Sigue! Comrade socialists we’ll win because they are wrong
As the song goes and our fight goes, “The Union makes Us Strong”
So keep being brave we have the strength, the power and the might
A revolutionary salute to all the comrades and to all the comrades—Good Fight!