In the context of a possible teachers strike in the Twin Cities, we spoke with three Minnesota educators about the intersection of Black struggle and workplace mobilization. 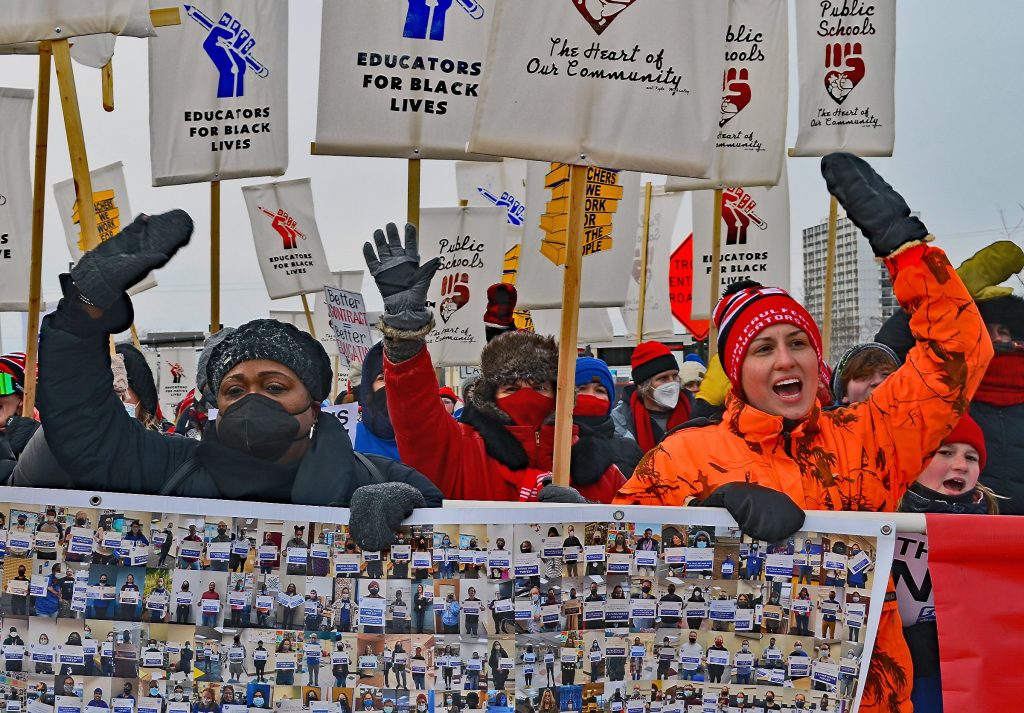 For the first time ever, both Minneapolis and Saint Paul teachers unions might be going on strike in the coming days. The union members authorized a strike last week, however, as negotiations continue, the unions’ executive boards have yet to call a strike. Once a strike call is made the unions will enter a 10-day “cooling off period,” which is a ruling class tactic used to diffuse the energy generated by strike votes in order to force compromises before workers have had a chance to take action. Among the educators’ demands are increased wages, smaller classroom sizes, mental health support for students, and support and retention of BIPOC teachers. As the student population in Minnesota becomes increasingly diverse, teachers in Minnesota remain overwhelmingly white. In this sea of white teachers, Educational Support Professionals (ESPs) — who are mostly people of color — are the outliers. They’re also some of the lowest paid workers in public schools. Their duties range from one-on-one support to students, to providing food, custodial, transportation, health, and interpretation services. The current starting wage for ESPs is a meager $24,000. At 40 hours a week, that’s $11.54 an hour while inflation is at 7.5 percent.

The Twin Cities have a long history of workers rebellion. Minneapolis was the epicenter of the 1934 teamsters strike for better wages and shorter working hours. In 1946, Saint Paul witnessed the first ever teachers strike in the country. The area was also the birthplace of the George Floyd rebellion in which thousands of people poured out into the streets in cities across the world to protest racist police violence. Since then, although the ruling class has repressed and co-opted the intensity and ferocity seen during the uprisings, protests against racist police terror continue. Just this weekend, there was a mass shooting at a protest in Portland, where demonstrators had gathered to demand justice for the police murder of Amir Locke, killing one person and injuring five.

Following the George Floyd uprising and throughout the pandemic, the labor movement has seen an increase in unionization efforts and an overall increased sense of militancy among workers. Left Voice spoke to three educators about the possible teachers strike and the struggle for Black lives.

Drew Valle is a Black special education teacher in Minneapolis and uses they / them pronouns. Regarding the demands for increased wages for educational support workers and support for educators of color, Drew said, “We want fair pay for our education support professionals who are often BIPOC and are unfairly compensated for the real work they do. I am a Black teacher and I want to see the working conditions of my peers improve.

“I also want to be fairly compensated for what I do and my expertise in my field. I have two bachelors degrees, a masters degree, and almost a decade of experience serving young people. I want MPS [Minneapolis Public Schools] to display with its resources the value that I — and folks like myself — bring to a district that’s not always welcoming of us. We’re the future of what education looks like.”

Reflecting on the racist police murders in the Twin Cities, Drew said, “As a Black person, when I hear [the names] George Floyd, Amir Locke, or Daunte Wright, I think of these murders as painful reminders. I don’t think the cost of racial justice in the United States of America should be Black lives in Minnesota. But I do think that our teachers are fed up with the disgraceful system of policing that costs us our most cherished young people. I don’t want to teach in a place where fighting for Black lives and fighting for workers rights are mutually exclusive, and I think many of my peers in this profession would agree.”

Sacha is a special education assistant and was, until recently, a MPS student. Sacha is white and only wanted his first name used. He talked about the need to challenge the status quo, saying, “Like anyone will tell you, the George Floyd uprising of 2020 changed everything in Minneapolis. It showed people that the systems in place are a lot weaker than we might assume and that they need to be challenged. I think there is also a feeling that there is unfinished work. MPD [Minneapolis Police Department] still exists and still has a bloated budget. One comparison I’ve seen being made is how much more a rookie cop in MPD makes than a first year teacher with a BA in MPS.”

Jessica Garraway is a cadre reserve substitute teacher and identifies as a Black anarchist. About the unions’ demands to increase support for Black educators, she said, “MFT [Minneapolis Federation of Teachers and Educational Support Professionals] is demanding that the district support and retain teachers of color. The union wants increased mentoring and support for BIPOC educators because there are so few of us. Even though I see so many things getting better, we still deal with racism from white teachers. There are lots of problems that need to be addressed. I don’t wear rose-colored glasses. So MFT is putting forward a proposal and the district doesn’t want to accept it. They say that they legally can’t [accept the proposal] because it would open them up to lawsuits. The ed reform people are also opposing the proposal. Ed reform people are those who want privatization of education and weakening of unions.

“The majority of kids here are people of color but the majority of teachers are white. In general the education system is failing our kids where they have to go into a world which is anti-indigenous and anti-Black. People have to be challenged. You have to be anti-racist, or you are racist.”

Regarding the intersection of the BLM movement and the teachers struggle, she said, “With the BLM movement and the murder of Black people by police terrorism, things have become polarized where white people can’t just ignore systemic racism and colonialism. They are being challenged on it and are being forced to pick a side. Teachers are generally people who care for others and love the profession. They are not in it for the money. [As a result of the Black Lives Matter movement,] SROs [school resource officers] are no longer in our schools. Cultural competency and racial justice has become very prevalent in every classroom I have entered. Because of the work we have been doing in the BLM movement and indigineous struggles, white people who espouse these values are really being pushed to put their money where their mouth is. You are seeing this cross of various movements coming together in a good way. Teachers are supportive of students who are active in these movements. More than any time in U.S. history, there is a strong basis for a broad-based working class movement and authentic solidarity.

“We had an uprising in the city. People burned down the precinct and Newsweek showed that people were in favor of it. There is this openness towards militancy that was not there prior to the uprising. That is reflective of the times we are living in.”

The coming days will tell whether the Twin Cities teachers will strike or not, but it is clear that working class people everywhere are becoming increasingly aware that capitalist exploitation of workers and racist police murders are two sides of the same coin. Overcoming these evils will come from our collective power and not through ruling class concessions.