On the day that marks the second month of Santiago Maldonado’s disappearance, rallies were held all over the country. Santiago’s brother, Sergio, read a letter in which he asked the president of Argentina, “Where is Santiago Maldonado? 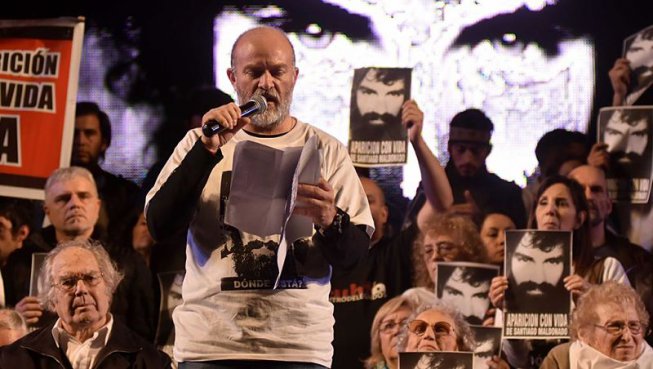 On the day that marks the second month of Santiago Maldonado’s disappearance, rallies were held all over the country. Santiago’s brother, Sergio, read a letter in which he asked the president of Argentina, “Where is Santiago Maldonado?”

As if it was rush hour, Buenos Aires’ metro was packed this Sunday afternoon while thousands of people headed downtown to Plaza de Mayo. Santiago’s family called for a rally to demand that Santiago Maldonado be returned alive. It’s been two months since he disappeared during a large-scale repressive operation in the south of Argentina led by the gendarmerie against the Mapuche. The indigenous Mapuche were occupying the land of their ancestors that is today “legally” owned by the Benetton company.

In the past two months, Mauricio Macri’s government did everything in its power to obstruct and divert the investigation in order to preserve the prestige of the gendarmerie, the only police force in Argentina that enjoys a good reputation. Macri’s government can’t afford poor public opinion as it gears up to pass a new austerity program that would attack the working-class even further.

Although all the facts point to the gendarmerie being responsible for Santiago’s disappearance, the government’s strategy has been to cover up the evidence and to start a campaign against the Mapuche people and Santiago’s family. Aided by the big corporate media, they spread ludicrous hypotheses – such as the unsubstantiated claim that he drowned – that have been all proved decisively wrong.

This case turned into a political crisis for the government as they started to feel the social pressure that peaked on September 1st when an enormous crowd filled Plaza de Mayo asking “Where is Santiago Maldonado?”

This Sunday, large crowds reconvened at Plaza de Mayo and other locations throughout the country, including human rights organizations, unions, political parties including the PTS as part of the Left Front, and thousands of non affiliated people, gathered to demand the government provide an answer to the same question.