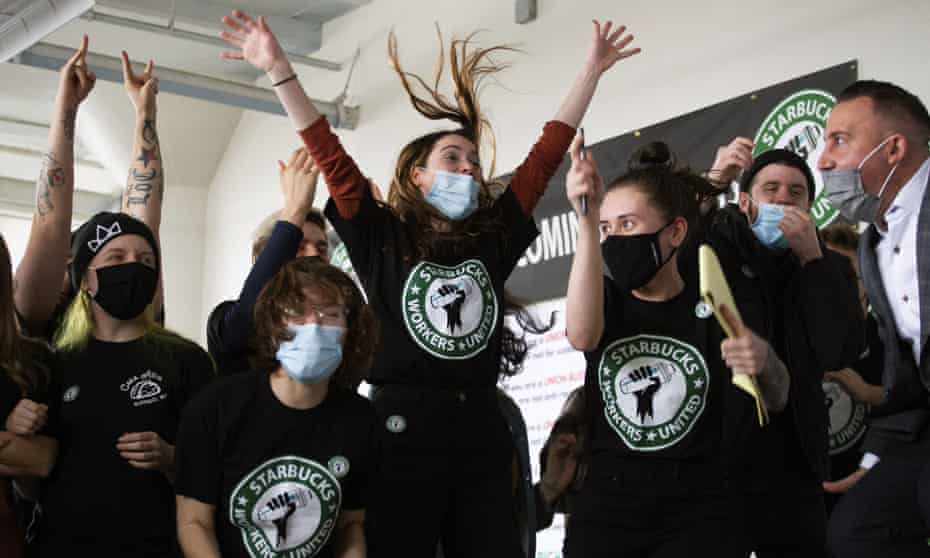 The United States’ first unionized Starbucks in Buffalo, New York, has set off a chain reaction of unionization votes in Starbucks stores all over the country. As of January 11, workers in Cleveland, Ohio, Hopewell, New Jersey, Chicago, Illinois, Eugene, Oregon, Knoxville, Tennessee, and Broomfield, Colorado, have filed for an election with the National Labor Relations Board (NLRB), and workers in Mesa, Arizona are waiting to cast their votes for a union by mail later this month.

Currently, only two Starbucks locations in the country are unionized. Three Starbucks stores near Buffalo, New York, held union elections last fall, and on December 9, the Elmwood store decisively won their election. The Camp Road cafe voted not to unionize, and the third location, on Genesee St. in Cheektowaga, appealed their election tallies to the NLRB, claiming that several of the votes cast should not count as they were cast by people who did not work at the store. On Monday, January 10, the NLRB sided in favor of the Starbucks workers and the Genesee St. location became the second unionized Starbucks in the United States.

The process of forming a union at these stores was not easy. The Buffalo-area Starbucks workers were inundated for weeks before their union vote with classic union-busting tactics from Starbucks’ upper management, including intimidation, surveillance, and threats. While workers fought for better conditions, upper management continued to make millions– Starbucks President Kevin Johnson made $14.7 million in salary and stock last year alone.

The Buffalo-area workers’ efforts to organize together have already started paying off, even before bargaining for their first contract begins. Workers at the Elmwood store walked off the job last week in protest of unsafe working conditions. They reported burning out from understaffing due to coworkers out sick with COVID, and the added stressful task of enforcing masking rules in their store. The Elmwood workers decided that going to work in unsafe conditions, without N95-style masks, adequate testing, full staffing, or hazard pay, wasn’t a risk they were willing to take, and bravely determined together that they would not compromise their health for their bosses’ profits.

This action arrived in the middle of the so-called “Great Resignation,” where many individual workers who see no other recourse than quitting have left jobs that offered insufficient pay, insufficient pandemic safety, and insufficient respect. The Starbucks workers in Elmwood stood together to show that their union could make their working conditions better, and that they would fight for it. They refused to accept the Biden administration’s “safe” reopening plans, and kept each other safe instead.

That’s why all workers deserve a fighting union led by the rank and file. Such a union is the only way to ensure that the safety of workers is a priority when setting workplace policies, hours, pay, and benefits. Because workers produce all profit, bosses force workers into unsafe conditions. Only the power of a united working class can fight back. When workers can take into account their own safety, weigh the risks and benefits, and decide what’s best for them (in the case of the Elmwood Starbucks, closing the store for just five days), workers stay safer. When keeping stores, restaurants, and other workplaces open, in order to keep generating record profits, is the number one priority, we see massive COVID surges like the ones currently racking our schools.

Starbucks workers nationwide are showing the way forward. Our lives are worth more than their profits and we must unite, unionize, and organize to guarantee the safety of the working class.