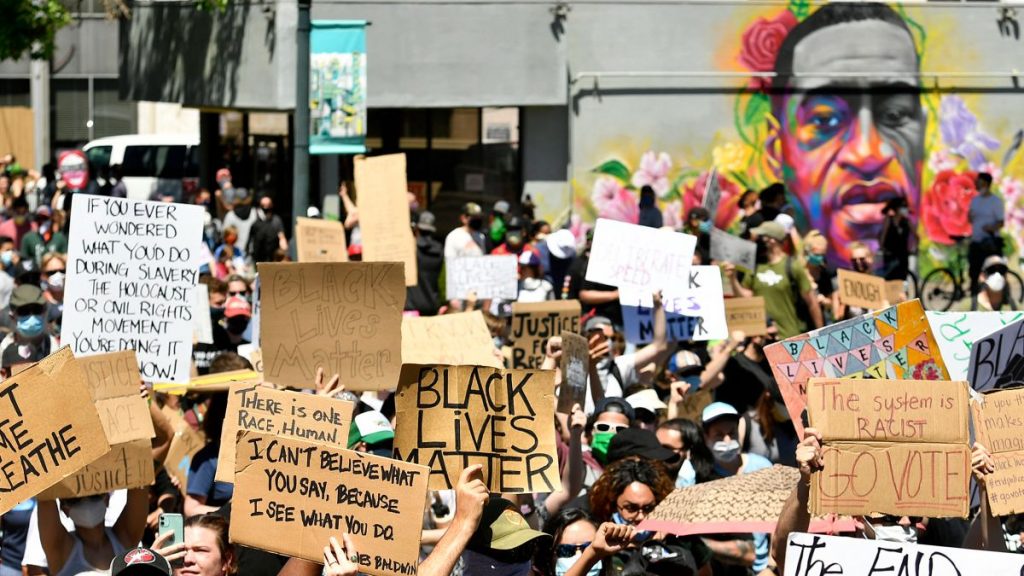 Two years ago today, only a few months into the coronavirus pandemic, Derek Chauvin pressed his knee into George Floyd’s neck for almost 10 minutes. Police officers Alexander Kueng and Thomas Lane stood by and helped Chauvin commit this heinous crime. The crowd begged him to stop. Darnella Frazier bravely recorded it on her phone. Floyd cried for his life, he cried for his mother, and Chauvin killed him.

It was only a few months earlier that white supremacists had killed Ahmaud Arbery.

The video, the harrowing, heart-wrenching, deeply enraging video, quickly spread around Minneapolis and around the world. And it sparked a movement, the biggest social movement in U.S. history. It is estimated that 26 million people people took the streets that summer with Black people on the front lines. In places like New York City, there were marches from sun up until late at night, and even tiny towns, which almost never take to the streets, had Black Lives Matter protests. Almost 4,500 cities held protests around the world. Activists in Europe tore down statues of colonizers, and only a few months later, a Nigerian uprising against SARS police violence emerged.

A whole generation was deeply changed by the protests and by the conversations we had with friends, family, and co-workers.

A whole generation learned key ideas: racism is systemic. The police are the descendants of slave catchers and will not hesitate to murder Black people, as well as brutalize protesters standing on the side of Black lives. Police departments are generously funded while the government claims there is no money for healthcare or education. The whole damn system is guilty as hell.

The way we protested changed.

We don’t march on the sidewalk in New York City anymore.

The Black Lives Matter movement created a whole new relation with the city, with the street, with protests. We built barricades to defend ourselves from the cops. In Minneapolis, people burned down a police station. On Juneteenth, port workers shut it down — closing the ports on the West Coast. In New York City and Seattle encampments were set up demanding to that the police be defunded. Months later in Oregon, mothers organized themselves to defend protesters from the cops. Fathers joined in using leaf blowers to combat the tear gas. Around the country, people faced local police and federal troops. Statues were toppled in the U.S. and around the world. Street protests raged for months.

Unionized workers also organized against the police in their unions. SEIU Drop the Cops and Cop Free AFSME are two organizations within unions in which rank-and-file members fought to kick the police out of their unions. Police are not workers: they are attack dogs for capitalists. They align with bigots and break strikes.

The Far Right began to mobilize as well. White supremacists came out carrying guns, Donald Trump flags, and confederate flags. Kyle Rittenhouse traveled across state lines to brandish a gun and kill people. Charged with murder, he was acquitted by the courts just a few months later.

Meanwhile, Black Lives Matter activists still face charges. Tristan Taylor, a Black socialist, founding member of Detroit Will Breathe, and member of Left Voice is facing felony charges almost two years later. He was charged after walking in the street during a nonviolent BLM protest in 2020.

The differences between the way the state treats white supremacists and Black Lives Matter activists is staggering and meant to deter future mobilization.

And although folks didn’t talk about it too much, Floyd was murdered in a Blue state. And in Blue states all over the country, there were curfews, cops running over protesters, protesters kettled and locked up in droves. The Democrats stood at the head of much of the repression we experienced around the country while painting “Black Lives Matter” on the ground and kneeling on the ground in kente cloth. The BLM protests were a prime moment for voter registration, and the Democrats tried to both tame and ride the BLM wave to the polls. The graveyard of social movements at work.

They had help from the BLM National Network and other nonprofits in bringing the movement into the fold of the Democratic Party. The leaders of BLM the organization that rallied people to the Democrats were later exposed for receiving tens of millions of dollars in donations and not revealing that to the public. Buying mansions with the donation money for themselves while other on-the-ground activists and victims’ families faced felony charges and became homeless.

Corporations like Amazon and Bank of America gave money to the BLMGNF to appear to support the movement while exploiting their workers, union busting, and firing workers like Chris Smalls, whom they called “inarticulate.” Since then organizations like the BLM 10 and the Black Power Collective (formerly Black Lives Matter Inland Empire) wrote statements calling for financial transparency and later called for a break with the Democratic Party.

The movement had some wins. Derek Chauvin was locked up as a result of the protests — a small, basic victory, but a victory nonetheless. Cops essentially never get held accountable for their actions. And around the country, some areas got cops out of schools.

I wonder what we could have achieved if we had really shut it down. If “shut it down” didn’t just mean the streets but our workplaces. As one comrade said to me, “I wonder what would have happened if we had just marched to the GM plant” — where there are predominantly Black workers. Of course, the union leaderships, which are content to issue statements and push their members to the polls, do not use our strongest weapon — the strike. There were glimpses of this — SEIU called for a Strike for Black Lives in coordination of the ILWU West Coast port shutdown, although few SEIU work stoppages actually occurred. Yet it showed a glimpse of what could be and what will need to happen in order to defend Black lives and end police brutality — coordinated strikes against police killings.

Two years later, with Biden and the Democrats in office, we are witnessing a massive bipartisan backlash against the movement. We have Biden, in his State of the Union speech saying “We should all agree: The answer is not to defund the police. It’s to fund the police. Fund them.” Police budgets all over the country, even those that initially had some funding cuts, are increasing their budgets beyond 2020 levels. Both Democrats and Republicans are claiming that a “crime wave” necessitates more police. And both Democrats and Republicans are increasing the military budget to increase the U.S. imperialist machine abroad.

There is a bipartisan backlash against the idea that murderous police need budget cuts or even reforms.

At the same time, a whole generation has been changed by the BLM protests of two summers ago. You hear it in Chris Smalls leading the crowd in a “Fuck 12” chant at the Amazon Labor Union rally. You see it in the signs held up by Minneapolis educators on strike demanding more educators of color, or in the demands of those teachers for counselors for their schools where Black children were traumatized by the images of police violence. You see it in the defiance of the Minneapolis youth who occupied a government building in solidarity with teachers on strike, who marched in the streets chanting “No justice, no peace.”

A generation changed by Black Lives Matter is present in every unionization struggle and struggle against the powers that be. It’s present in the solidarity between sectors that have previously been told our issues are separate: Black folks, workers, queer folks, and more.

The Far Right is terrified of the changes they are seeing in young people — sometimes in their own children. More union friendly, more queer friendly, and talking about systemic racism. This is the basis of the backlash against “critical race theory” in schools — the Far Right wants any discussion of racism out of the curricula. They are afraid of the progressive sentiments in the new generation.

And they should be afraid.

The Black Lives Matter movement is on the backfoot right now. The bipartisan regime wants to increase police funding and restore legitimacy to the system that murdered George Floyd. But movements come like waves, and they leave lessons behind.

The Black Lives Matter movement was not crushed. It is regrouping. And in the interregnum we must learn lessons from the past movement and be ready for the next one.