Two years ago, millions of people took to the streets of Chile. Today, the cost of living is rising, while the billionaires who own the country enrich themselves. Revolutionary socialists are campaigning in the elections to “retake the path of October” and advance toward a general strike. 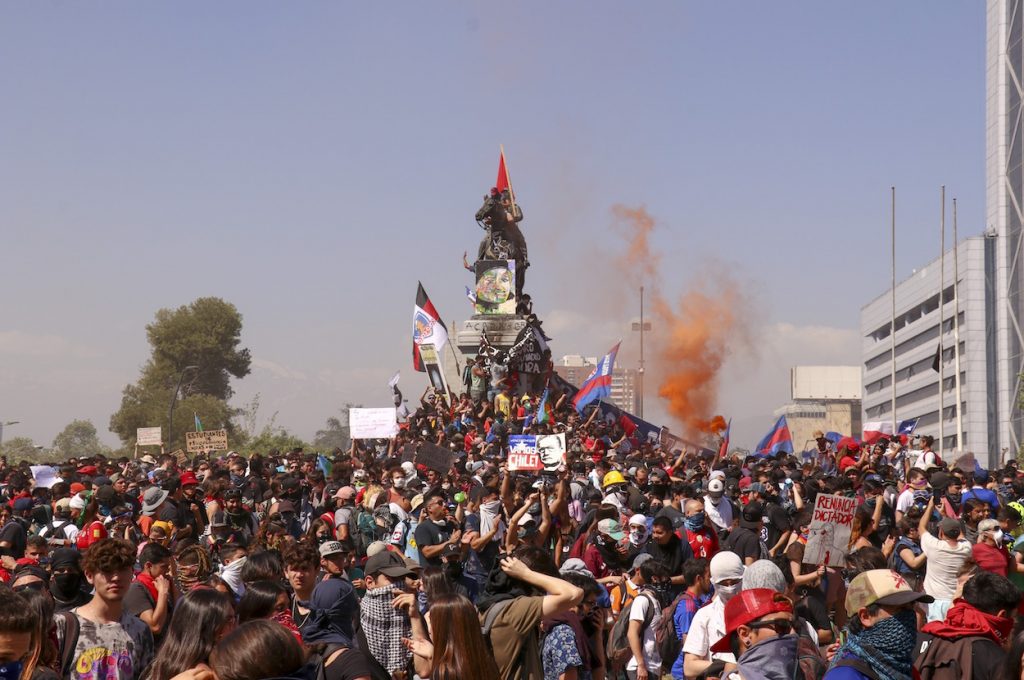 Monday, October 18, was the second anniversary of Chile’s rebellion of 2019. It was sparked by young people jumping turnstiles amid a rise in public transportation fares, and grew into a movement against the country’s neoliberal system. Miserable pensions, low salaries, a housing crisis, and other problems gave rise to a mass movement demanding a Constituent Assembly. On November 12, the rebellion reached its zenith with a general strike that included different sectors of the working class, accompanied by mobilizations in neighborhoods and slums. Three days later, on November 15, establishment parties signed a pact behind closed doors. This included the Independent Democratic Union (UDI), Approve Dignity (Apruebo Dignidad), and the Broad Front (Frente Amplio) headed by Gabriel Boric. In the early morning of November 16, Abel Acuña died in Plaza Dignidad (Dignity Plaza) as the result of police violence, adding to the long list of victims of repression. Numerous people were murdered by the armed forces and the Carabineros (military police). Many more were injured, mutilated, and tortured. Around 600 political prisoners of the rebellion were held without evidence or due process.

Why Is Piñera Still in Power?

Two years have passed and the right-wing president Sebastían Piñera still enjoys impunity. His government has been weakened due to revelations about his use of tax havens (as revealed in the Pandora Papers). He has also invested in large-scale mining projects that have led to environmental devastation. Piñera has again received notification of a constitutional indictment (impeachment process) against him — but this institutional method has already saved him more than once, like when he was accused of violating human rights during the rebellion.

Today, Piñera isn’t the only one facing a political crisis. The right wing of Piñera’s party, Vamos Chile, lost credibility with its base thanks to the babbling of Piñera’s standard-bearer Sebastián Sichel, who denied working as a mining lobbyist. The center-left coalition once known as the Concertación is suffering in the polls. The left reformist Frente Amplio has shifted to the right, as Gabriel Boric gave a speech appealing to the business sector. Given the weakness of Piñera’s right-wing party, the far-right phenomenon of José Antonio Kast has grown.

The Constitutional Convention represented a plan to divert the rebellion towards the institutions. The Right and the Center-Left worked together to save the constitution inherited from Pinochet. In practice, this meant the Convention was subordinated to parliament, and decisions could only be made with a two-thirds majority. This policy was endorsed by sectors of the Frente Amplio. Curfews as a result of the Covid-19 pandemic lasted for one and a half years. But after those restrictions were lifted, Piñera declared a state of emergency in indigenous regions and sent the military to repress the Mapuche people, as demanded by the Far Right and the capitalists.

A Return to the Path of Rebellion

New economic struggles have led to a recomposition of the union movement. Workers have taken up demands of the rebellion, such as public healthcare and freedom for political prisoners, both of the rebellion and the Mapuche people. Throughout the entire country we have seen isolated strikes, scattered work stoppages, and workers’ protests.

At the beginning of the pandemic, healthcare workers mobilized and denounced the lack of personal protection equipment, along with the lack of infrastructure. Today they are fighting against layoffs. Mobilizations at hospitals such as the Hospital Barros Luco y Sótero del Río show that this discontent has spread nationwide. Workers from the “Front Line” have denounced low salaries and concessions in hospitals, such as the struggle at the hospital in Antofagasta. Meanwhile, in industry and mining the workers of Mantos de Luna, Abermale, and SGS have mobilized against anti-union practices. The workers at the port of Quinteros, public-sector workers in Puente Alto, and teachers across the country have also recently mobilized.

Two years after the rebellion, the disperse struggles of the working class must be transformed into a single fight. The workers need to put themselves center stage. For this, it is necessary to unify the many different demands into a single list: for expropriation without compensation of companies that contaminate the environment under workers’ control and management; for a minimum wage and pension of 600,000 pesos (around US$700), in line with the cost of feeding a family; for an end to precarious work without a cut in wages; for the distributions of all available work between the employed and the unemployed; for the demilitarization of Wallmapu land and the right of self-determination for the Mapuche people; for health care, education, and housing; for ending subsidies to private entrepreneurs who get rich at the expense of the public; for women’s rights, such as legal, safe, and free abortion; for the rights of the LGBTQ+ community; and for an end to the looting of resources at the hands of multinational corporations.

To drive out Piñera and his business friends, we need to coordinate struggles and form a united fron. This requires a program of political independence from the official “opposition” of the Center Left and the reformists, who present themselves as friends of working people, but refuse to push for the self-organization and mobilization of the working class.

Big unions such as the United Workers Center (CUT) must come up with a single list of demands, coordinating and unifying the sectors in struggle with rank-and-file assemblies and organization. The working class and the people should return to the path of October [2019], with the perspective of a general strike, to drive out the Piñera government and impose a working-class solution to the crisis.

Socialist workers are running as candidates in the upcoming elections of November 21. The Revolutionary Workers Party (PTR) is part of the Front of Unity of the Working Class. We fight to drive out Piñera via the mobilization of the working class and the people. This is why it is so important to coordinate the struggles and form a united front. We present a program that is completely independent of the “opposition” of the Frente Amplio and the Concertación, that are trying to get votes instead of pushing for self-organization and mobilization. The candidacy of Lester Calderón in Antofagasta serves this aim: the working class must become a political subject with a program independent of the capitalist class.

Originally published in Spanish on October 18 in La Izquierda Diario