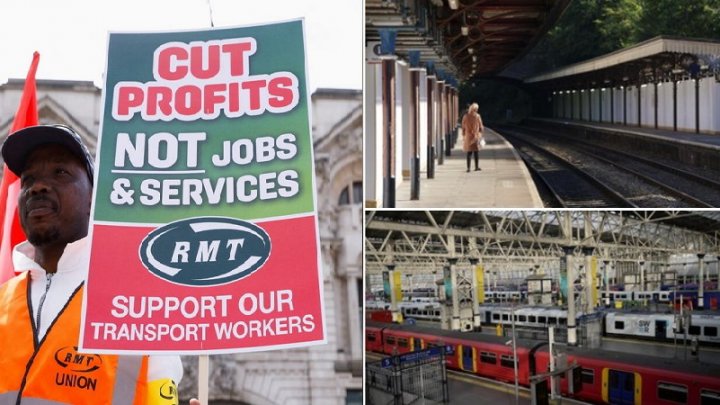 Train stations across the United Kingdom and the London Underground remained closed or inoperative on Tuesday. Striking railway and transport workers are demanding better salaries in the context of a sharp increase in prices.

Inflation in the country currently stands at 9.2 percent, and could reach upwards of 11 percent in the fall when energy and oil prices are likely to rise again, according to government officials. Prices are expected to rise by 50 percent in October when the cold weather sets in, on the heels of a 50 percent increase in April.

This is the United Kingom’s biggest rail strike in more than 30 years. The National Union of Rail, Maritime and Transport workers (RMT) called for actions across the industry today, and has called for two more day-long strikes on June 23 and June 25. Workers are demanding improvements to the public system, Network Rail, as well as to the privately-operated lines.

Hundreds of photos show picketing workers enforcing the closures, coming out in force to stand in front of train stations, workshops, and operating stations.

Trains are not running in England, Scotland, or Wales. About 40,000 cleaners, signalers, maintenance workers and station staff on the railways have also joined the action.

Tuesday’s historic rail strike coincides with a strike of around 10,000 London Underground workers, who are fighting against job losses and attacks on pensions.

In London today, there is very limited subway service, with most lines not running. The closures have created long lines at city bus stops, while demand for cabs has been significant. The government has advised the populace to avoid traveling as much as possible.

Even as the strike brings the country to a standstill, British Transport Minister Grant Shapps has refused to meet with the railway unions to resolve the dispute over wages amid rising inflation. For its part, the Labour Party has rebuked the strike from the top: a leaked memo from Labour leader Keir Starmer enjoined the party’s senior members in parliament from publicly supporting the strike.

Meanwhile, Boris Johnson’s government has hit back, trying to break the strike by allowing companies to bring in agency and outsourced staff, a move that unions have denounced as impractical, unsafe, and potentially in breach of international law. However, Johnson has so far been unsuccessful, and the strike remains firm.

In the days ahead of the strike, the government announced that it would seek ways to designate railway service as essential, forcing train operators to provide minimum services even during the work stoppages. So far this has not happened, but it shows the government’s desperation to weaken the strike and slow the struggle for wage increases. However, there is no end in sight for the decline in purchasing power which led to the strike, which will only increase the economic pressure on millions of workers.

The strike was precipitated by a meagre offer by Network Rail to raise public sector workers’ wages by 3 percent. Wages for these workers have been frozen since 2020, so this ostensible “raise” leaves workers’ salaries far below the cost of living.

In this context, thousands of workers grouped in the Trades Union Congress (TUC) federation took to the streets over the past weekend across England and Wales. The protest passed in front of 10 Downing Street, the Prime Minister’s official residence, before reaching Westminster Palace, the seat of Parliament.

For its part, the National Education Union (NEU) declared that if it does not receive a wage offer by Wednesday that matches inflation, the union will put forward a strike authorization vote among its 450,000 members. If the vote passes, teachers would go on strike in the fall, between September and October.

Meanwhile, workers in the NHS (National Health Service) are faced with a new contract that would put their wages well below inflation. For nursing staff, this would essentially mean a 10 percent cut in their income, a prospect which has already caused widespread discontent among workers.

Clearly, the U.K.’s public sector workers have plenty of reasons to strike. The depreciation of wages affects millions of workers who served on the front lines of the pandemic over the last two years. This sector faces much slower rates of wage growth than the country as a whole. Official figures show private sector wages rising by 8.7 percent per year, compared to just 1.6 percent in the public sector.

Unions estimate that British workers have lost around one third of their purchasing power compared to 2008, due to inflation and the lack of commensurate wage increases. They claim that this is the biggest fall in “real wages” since 1830.

As we pointed out in a previous article, “The dynamics of this situation and the predisposition of workers to fight for their rights reminds us of what was known as the ‘winter of discontent’ — a wave of struggles that took place in the winter of 1978-1979 in the United Kingdom in response to the then Labour government’s attempt to impose a 5 percent wage ceiling at a time of high inflation.” The advance of the struggle depends on extending the strike, and integrating more sectors and workers into the fight.

This article was originally published in Spanish on June 21, 2022 in La Izquierda Diario.