U.S. Senators and Oil Multinationals are Debating Whether to Impose Sanctions on Myanmar to Protect Imperialist Interests

U.S. senators are lobbying Joe Biden to impose sanctions on Myanmar’s oil industry despite lobbying from oil and gas multinationals such as Chevron and Total. 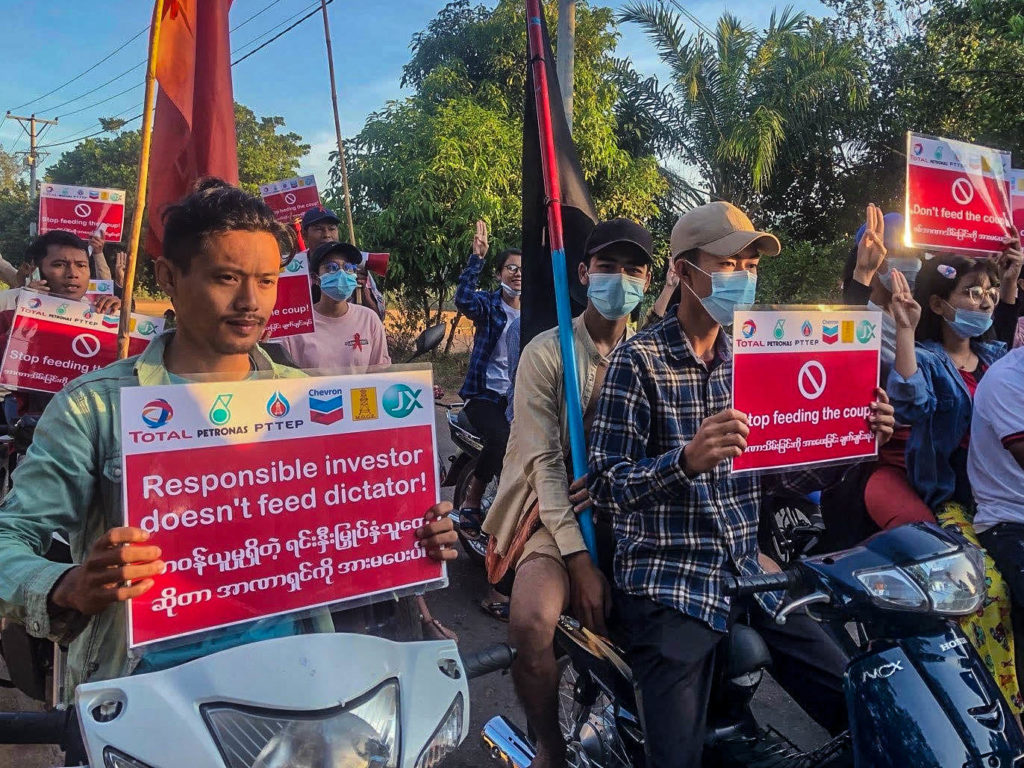 Since the coup d’état on February 1, the military in Myanmar has killed at least 755 people and arrested more than 3,400 political opponents — not counting the numerous wounded, the humiliations and torture, the robberies of small tradesmen and the destruction of their goods, the evictions of the strikers from their homes, and the creation of a repressive climate throughout the country. In this context, several activists and associations have started to put pressure on multinational companies with interests in Myanmar to sever their business ties with the military regime. This is particularly the case for major French and American oil producers, including Chevron and the French oil and gas multinational company Total — the main financier of the military junta.

Until now, Western governments have imposed limited sanctions against the military and certain companies, but with exemptions for the oil and gas sector — the main source of foreign currency for the military junta — to protect the interests of the imperialist multinationals in the country. The latter, for their part, are conducting a lobbying campaign to influence U.S. political leaders.

For instance, Chevron spent more than $2 million dollars on lobbying against sanctions during the first months of this year. According to a New York Times article, “Chevron has dispatched lobbyists — including some former federal government officials, one of whom appears to have left the State Department just last month — to agencies including the State Department and key Congressional offices to warn against any sanctions that might disrupt its operations in Myanmar.”

To justify its position, Chevron uses hypocritical arguments to highlight their so-called “concern” for their employees and local populations. For example, Chevron spokesman Braden Reddall is quoted in the same New York Times article as saying, “We condemn the human rights abuses in Myanmar and we support the people of the country on their journey to a modern, peaceful and prosperous democracy [but] … if we do not pay our taxes, we stand in breach of contract, which could put employees at undue risk of criminal charges.” Reddall also suggested that sanctions could have other negative side effects for people in the region, including the disruption of energy supplies. Curiously, these are virtually the same arguments put forward in a recently published open letter by Patrick Pouyanné, the CEO of Total.

On Tuesday, however, a group of seven Democratic and Republican U.S. senators called on Joe Biden’s administration to impose sanctions on the military-controlled Myanmar Oil and Gas Enterprise (MOGE). This would affect the business not only of Total and Chevron but also South Korea’s POSCO, Thailand’s PTT, Malaysia’s Petronas, and China’s CNPC. All these companies generate an income of around $1.5 billion a year for the junta. The mechanism proposed by the senators implies that “joint ventures involving multinational oil and gas companies pay revenue into a trust or protected account which is either held until such time as Burma has a legitimate and democratically-elected government or used for humanitarian purposes.”

While nothing has been decided yet — and there is no guarantee that any such action will be taken — the multinationals and their supporters warn that the imposition of sanctions could drive Myanmar’s military junta into the arms of China to fill the income vacuum left by the retreat of Western companies. In reality, Total and Chevron share an interest in avoiding sanctions on the oil and gas sector. Beyond the speculation about alliances with China, the military junta would be severely weakened if it lost oil and gas revenues, not to mention the international isolation in which it finds itself.

For the working class, the youth, and the national minorities in Myanmar, even in the case of sanctions, there should be no illusion: imperialism never takes measures in favor of the people. The imperialist states are by no means allies in the struggle against the dictatorship. Their economic and geopolitical interests obviously take precedence over those of the exploited and oppressed in the region. As the example of the Chevron lobby campaign demonstrates, the high officials of these states are totally linked to the multinationals. The main allies of those fighting against the dictatorship in Myanmar today are the exploited and oppressed in neighboring countries and in imperialist countries.

First published in French on April 28 in Révolution Permanente.