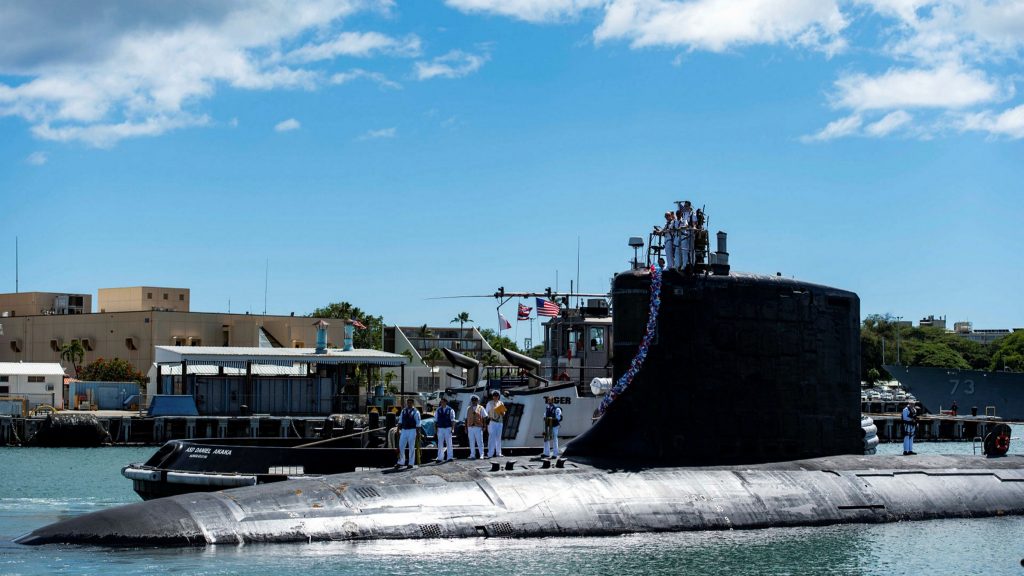 The Australian government announced yesterday that it had signed an agreement with the United States and the United Kingdom for the production of nuclear-powered submarines. The move annuls a previous $90 billion agreement that Australia made with France for the procurement of diesel and electric submarines. The latter contract, signed with French defense contractor Naval Group in 2016, had been hailed as the “contract of the century.” Paris reacted strongly, calling the move “deplorable,” with French foreign minister Jean-Yves Le Drian going as far as to draw comparisons between the Biden administration’s sudden decision and Donald Trump’s rash, unilateral decision-making style. Beijing, for its part, condemned the countries’ “cold war and zero-sum mentality.”

Beyond disagreement between France and Australia over production sites, the decision shows the Biden administration’s preference for providing Canberra with non-conventional submarines — which France could not guarantee — capable of making the Oceanic country a pillar of the United States’ Chinese containment policy. The submarines can remain submerged for a long time, avoiding detection, and have the potential to fire long-range cruise missiles such as the Tomahawk in addition to their maritime armament of torpedoes and marine missiles. Defense specialist Jean-Dominique Merchet notes that this is the first time that the U.S. has agreed to sell such game-changing naval technology, and that previously only the U.K., in 1958, had benefited from the transfer of this U.S. technology.

The submarine production process will begin in 2040, despite the fact that Australia does not have the necessary facilities to produce the specific fuel the submarines require, and that it would to some extent violate the nuclear non-proliferation treaty. Wednesday’s deal increases the already high pressure on China considerably in any conflict scenario along the main maritime choke points in South and Southeast Asia (for example, in the Strait of Malacca, the Taiwan Strait, or the South and East China Seas).

At the same time, the timing of this announcement — two weeks after the catastrophic military withdrawal from Afghanistan — allows Washington to confirm its geopolitical priority: maintaining rivalry with Beijing and reassuring its allies in this important region. As part of this, on September 24, Biden will receive the three co-leaders of the so-called Quad, the security alliance to contain Chinese influence: the prime ministers of Australia, India, and Japan in person at the White House for the first time.

The agreement is a heavy blow to French diplomacy, not so much because of the economic damage — which is not negligible — but because of the loss of credibility. For years, France has been positioning itself as a permanent power in the Indo-Pacific, linked to the colonial possessions of its overseas territories. The country has sought to present itself as a third option outside of the U.S. and China in the region’s seas, refusing to be confined by the United States’ anti-Chinese naval containment.

Irritated at the loss of a lucrative contract, the French government has brought out its anti-Americanism as a mask. For supporters of Emmanuel Macron, the submarine deal demonstrates the French president’s strategic acumen in invoking Europe’s (impossible) strategic autonomy. But the reality is that beyond its imperial pretensions (which are far larger than its real strength), France needs the Pentagon — whether at the level of intelligence, military presence, or weapons — in the wars it’s waging, whether in the Sahel or North Africa. This is not to even mention the other European powers whose militaries pale in comparison to Paris.

The reality is that despite the Biden administration’s kind words towards European allies, these truly are Trump-like unilateral decisions. The United States has confirmed, once again, that its priority is rivalry with China at all levels — economic, technological, and military. Washington has no problem privileging its most important allies in this confrontation over traditional European allies, who are more moderate vis-à-vis Beijing and seeking points of “mutual understanding.” The new U.S. administration recently showed its first signs of this treatment when Switzerland decided to purchase F-35s from the U.S. over France’s Rafale aircrafts just after Biden’s visit to the Swiss Confederation at the end of June.

Notably, neither the French government nor the EU foreign affairs official were informed of the new agreement prior to its announcement. And even more shamefully, the agreement came one day before the EU launched its own new Indo-Pacific strategy to comfort the United States, a sign that the EU still has a long way to go before it acquires true strategic autonomy.

Originally published in Spanish on September 16 in La Izquierda Diario