UAW Workers Need Solidarity… and a Strategy to Win

The nationwide strike at GM can change the landscape of class struggle in the US. GM has escalated by cutting workers’ health benefits. A strategy to win would involve empowering the rank-and-file, democratizing the decision-making, and building international links with GM workers fighting abroad. 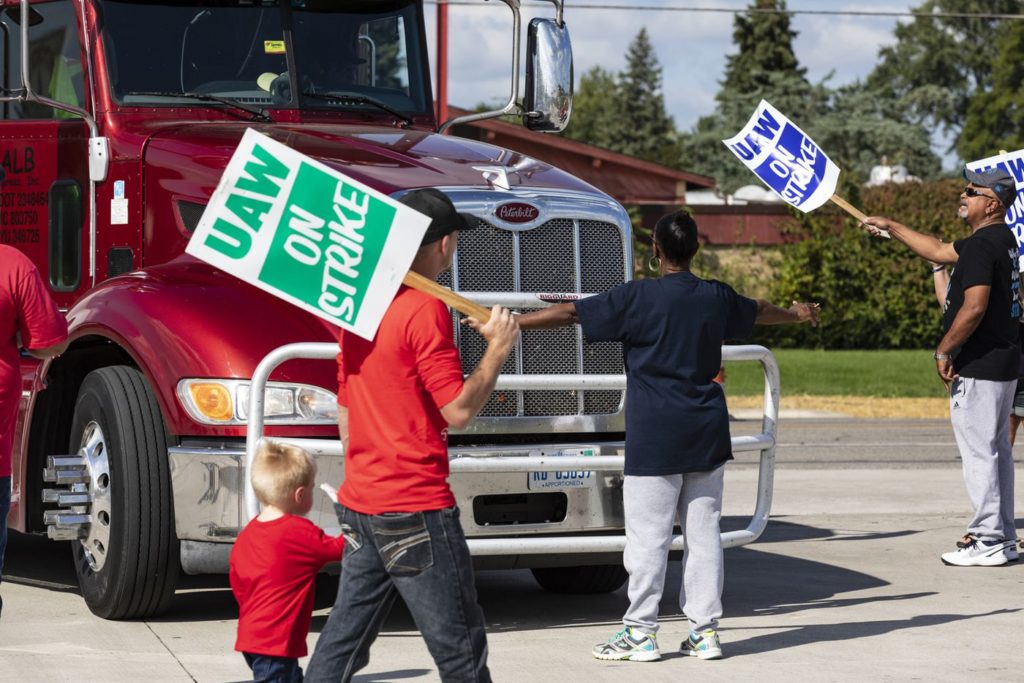 For the first time in twelve years, workers represented by the United Auto Workers (UAW) are going on strike against the face of American industry: General Motors (GM). Already, at only day three, the strike by roughly 49,000 workers is longer than the previous two-day strike waged against GM in 2007. While some sources have reported progress in negotiations, this struggle could drag on for weeks, or longer, if GM digs in its heels. With contracts already expired at Ford and Fiat Chrysler, the strike has the potential to spread to the rest of the Big Three’s workforce, numbering over 150,000 in total. Already the strike is estimated to cost GM upwards of $100 million a day. The objective power of GM’s workforce is such that a protracted struggle could send the state of Michigan into recession.

Today’s strike is being fought by an irate workforce that is fed up with GM’s bullying. During the 2008-2009 economic recession, UAW workers were asked to sacrifice financially to help keep GM and other automakers afloat, despite massive economic bailouts of the auto industry by the Obama Administration. GM used the economic crisis as an opportunity to cut costs and weaken the UAW. And now, a decade later, GM has once again achieved massive profits, reporting nearly $11 billion in pre-tax profits last year.  But despite accumulating massive wealth, GM continues to demand concessions from its employees. The company has now cut the health insurance of every striking worker.

Central to this class battle is GM’s multi-tiered employment structure that ensures new hires are paid poverty wages—roughly half the rate of more senior workers. Additionally, GM employs temporary workers who lack the rights and benefits of the permanent workforce. These temp workers, who often work full time indefinitely, face brutal exploitation and can be fired for taking sick days. Additionally, the UAW and GM are negotiating over pay and benefits, profit-sharing, and crucially, whether thousands of workers might become (or remain) laid off due to factory closings.

A Rising Tide of Class Struggle?

While American unions are still weak, there have been a series of strikes in recent years that provide important context for the current fight at GM. In the public sector, a massive strike wave by teachers gripped the United States last year, trickling into 2019 with the Los Angeles teachers’ stoppage. Then, 30,000 Stop and Shop grocery workers represented by the UFCW struck for 11 days and won some gains. Soon after, over a quarter million Teamsters authorized a strike against UPS, only to have a bad contract forced on them by their own union leadership. Similarly, 10,000 NYC nurses enthusiastically authorized a strike over staffing, before their leaders accepted a sub-par contract.

Now, over 80,000 Kaiser Permanente workers are scheduled to strike for a week, beginning October 14, which could be one of the largest private-sector labor actions in decades. Across the country, at a time of low unemployment, workers are beginning to become aware of their own power—and they’re starting to use it.

In the national political arena, there is also an upswing in left populism that condemns the wanton greed of companies like GM and posits that workers deserve more than they currently have. After all, if the economy is supposedly booming, why are so many working people struggling to get by, burdened with debt and low-paying, often part-time jobs? The economic recovery of the last five to seven years has not improved the lives of the masses; instead, it has allowed mega-corporations like GM to amass untold wealth while wages remain near recession levels. This is the context in which 49,000 auto workers are using their strategic role in industry to fight for a better deal.

Beware the “Labor Lieutenants” of Capital

The current strike at GM is a precursor to the upcoming negotiations with Chrysler and Ford. If GM workers win now, workers will be emboldened to fight hard against America’s other two auto giants. But if the UAW negotiates a sub-par contract with GM, it will be the automakers who are emboldened to extract yet more concessions.

The leadership of the United Auto Workers, which itself is in crisis due to government investigations into graft and corruption, chose to negotiate first with GM instead of bargaining with the Big Three automakers as a unit. Whether there is any merit to this bargaining tactic or not is unclear. What is clear is that a vast divide separates the auto-workers who work the assembly lines from the “fat-cat” union officialdom that is today directing the union.

In assessing the lead-up to the strike, Labor Notes paints a sad but all-too-common picture of today’s labor dispute: a confident, concession-minded employer on the one hand, and an unreliable, accommodationist union leadership on the other. According to the article, “GM Workers Have One Chance: Vote No,” GM workers have been kept in the dark about many aspects of the bargaining and strike prep has been minimal:

Not a button was distributed in the plants. Members heard not a word from leaders about bargaining goals. There was no survey of the membership, no contract action teams, no bargaining bulletins to keep members in the loop. No ‘practice picketing,’ no turn-down of overtime, no outreach to the public, no open bargaining.

Such leadership—bureaucratic officials who fail to prepare their members to strike, do not engage the rank and file in important decisions, and can’t even be trusted with the union’s finances—can’t be trusted to lead workers’ struggles to victory. This stratum of privileged officials balance between the union’s mass base and the boss—often favoring the latter over the former.

The organic shop-floor leaders must find ways to expand the influence of the union’s base, fight for union democracy, and curtail the crippling hold of the union’s leadership. At the same time, we must reject the government’s criminal investigations into the UAW leaders which poses a risk to the entire union. In the past, government meddling has weakened the cohesion of the labor movement. The task of “cleaning house” of corrupt union officials must fall on the membership itself.

In the globalized auto industry, the nodes of production are spread across national borders. Whereas Detroit, known once as “Industry City” for its array of massive automotive plants, could at one time produce most of a vehicle locally, today’s auto industry relies on a supply chain that spans across Latin America, Asia and beyond. Linking up with fellow GM workers outside U.S. borders is a crucial task today.

The current GM strike in the U.S. follows a historic 8,000-strong strike by GM Korea workers. The South Korean auto workers stopped production for the first time in 20 years, demanding a wage increase and an end to GM’s restructuring in East Asia that could lead to layoffs. In response to the Korean strike, a senior GM official expressed their “disappointment” in the workers, but explained that “GM could compensate by making up for lost production at the carmaker’s plants in other countries.” Thus, when GM is faced with a labor shortage in one country it consciously boosts production abroad to compensate. But what if GM workers struck in South Korea, Mexico and the United States simultaneously? While a lofty goal at this point, internationally coordinated strikes will be necessary for winning long-term gains.

Such a perspective offers UAW workers a better chance to improve their lives than “America First” protectionism, which is mostly ineffectual and always divides workers along national lines. Just as GM coordinates its operations internationally, so too must the working class!

In the short term, workers need effective tactics to win. In the long term, we need an effective strategy. One of the most important questions, from the point of view of revolutionary socialists, is: how can the working class at GM, the Big Three and beyond, organize and fight most effectively?

Some tactical objectives should be clear: shut down GM in the U.S., and begin to link up with fellow auto workers internationally to build a united front against the entire corporation.  By halting the company’s ability to produce and distribute their products, the company will incur huge financial losses and be compelled to give in to the union’s demands. And with the goal of shutting down GM, workers know to keep out scabs (those who would work during the strike) with established picket lines that no one dares to cross.

In addition to large, militant picket lines, workers’ solidarity is central to any successful strike. GM recently boasted that they have two-months worth of stockpiled cars and trucks, ready to be sold during the strike. But concerted labor action can block the stockpiles from ever moving an inch. A promising example of this was the Teamsters union’s refusal to ship GM cars during the strike. Transport workers across the country, and internationally, should follow the examples of the Teamsters and refuse to move all GM products for the length of the strike.

In order to build such an international fightback, GM workers would do well to organize themselves the same way teachers in Oklahoma and West Virginia organized during the teachers’ strikes: mass texts, social media, democratic assemblies and mass meetings. As happened with UPS Teamsters and New York nurses, union members often know how to fight and win, but end up getting sold out by leadership. Mass membership meetings, picket line meetings and other forms of self-organization at the level of the rank and file will empower the strike and open the door to even more militant struggle.

On a strategic level, the obstacle of obstructionist union bureaucracy must be confronted and eventually overcome. Democratic, class-struggle formations must be built in the unions to steer a course toward a better society where the working class wields power. To answer the problems of exploitation, environmental ruin, racism, xenophobia and other ills, we must imagine a society without billionaires and bosses, without corporate politicians. A strategic vision means internationalism, representative working class government and socialism.