The industrial action is the biggest ever seen in UK universities and includes academics, lecturers, researchers, and IT, administrative and library staff. The number of strike days has escalated each week, culminating in five days of action starting on Mar. 12.

The strike has already had an impact, forcing a number of universities – including most recently Oxford – to reverse their initial position and oppose the plan of the employers’ association, Universities UK (UUK), to abandon defined benefits on retirement in favour of variable payouts based on stock market performance. If successful, the new pensions arrangements would leave all contributors to the Universities Superannuation Scheme (USS) worse off, in some cases to the tune of £10,000 a year. 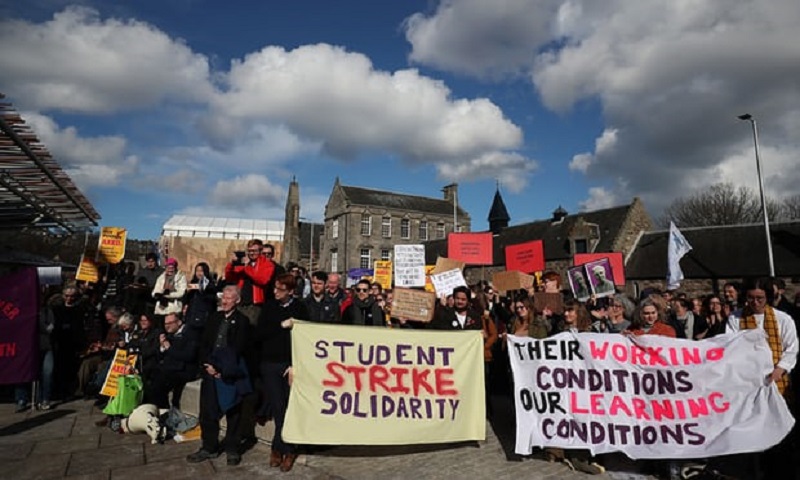 Morale among university staff is high and they are very determined to win this battle. The UUK has been obliged to reopen negotiations with the University and College Union (UCU) at the government arbitration service ACAS.

UCU members have mounted early-morning pickets outside most university buildings around the country on every strike day, handing out leaflets and carrying placards with the message “Our pension axed” and “Support our strike to defend USS.” There has been strong support for the strike from students, who have turned out in freezing conditions and snow to take part in picketing with hand-painted banners reading “Students support the teachers” and “Defend your education.” The lapel sticker “I support the striking university staff” has become a familiar site around the campuses. In some universities students have also brought coffee, tea, biscuits and cakes to the picket lines, and led the singing of well-known union songs such as “Solidarity Forever,” “There Is Power in a Union” and “Bread and Roses,” sometimes with verses adapted to the current dispute. In London, a small group of demonstrators carrying banners and drums occupied the headquarters of UUK and elsewhere, groups of students staged occupations of university offices.

In the afternoons, students’ associations and teachers have co-hosted a series of teach-ins on topics including the decolonisation of education, trade unionism and the right to strike, local struggles and solidarity, and the marketization of education.

On Mar. 14, the UCU is holding a national demonstration in London to defend education and pensions. Although university bosses have been forced to return to talks, at the time of writing there is no sign of resolution to the dispute.

After six days of talks and three weeks of strike action, UUK and UCU negotiators have reached an agreement. However, the deal is far from adequate since university staff will be losing 20 percent of their pensions while increasing their contributions. Further, the agreement is only for three years and it will be subject to an independent valuation review. In short, it delays the issue for three years but on much worse terms. 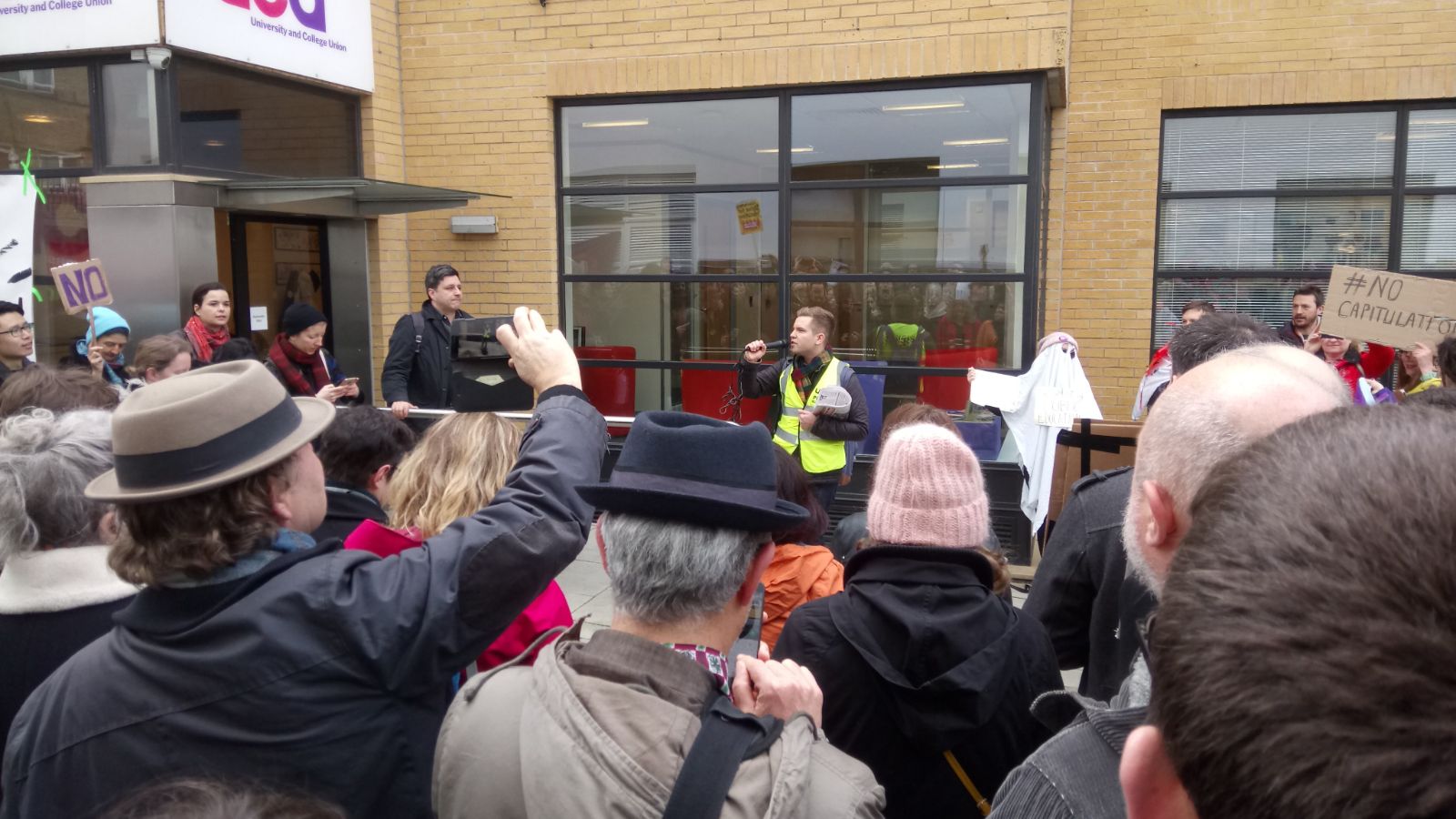 The initial reaction from striking university staff was overwhelmingly against the deal struck by the union leaders. University staff have expressed anger and widespread opposition with a rally taking place outside UCU headquarters in north London, where the deal is being discussed by senior members. Picket lines are busier than usual and meetings are being held on campuses up and down the country to discuss next steps.

Many UCU branches and individual members expressed their opposition using the hashtag #NoCapitulation Twitter, calling for the deal to be rejected. The general feeling is that “This is NOT the deal we have been striking for.” 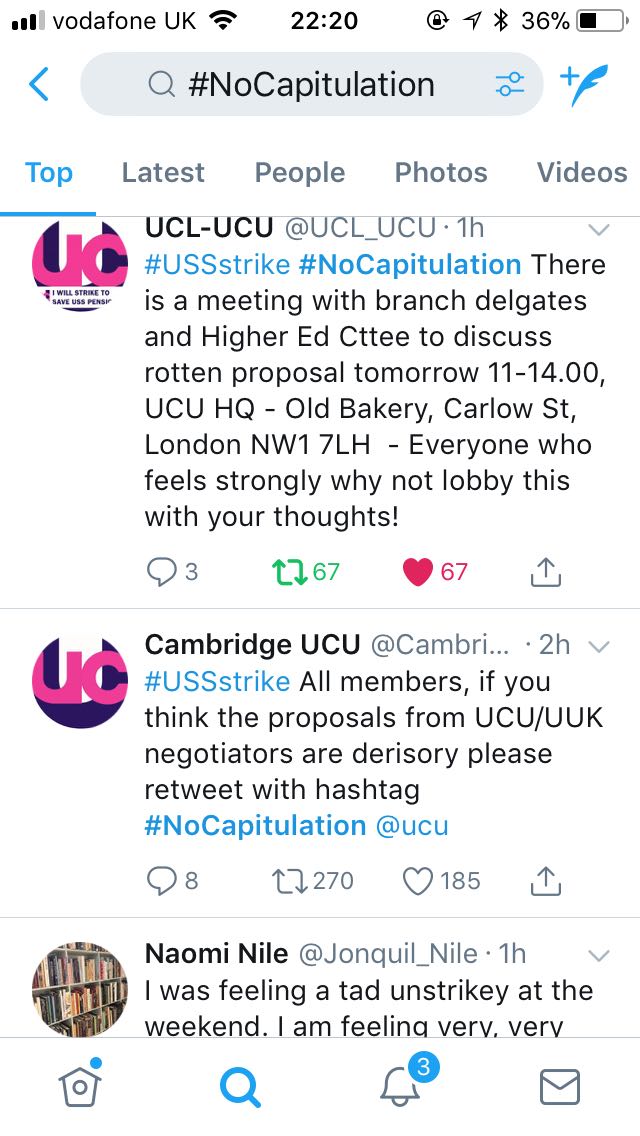 In the event that the talks break down, the UCU has authorized 14 days of further strike action in April, May and June which would have the effect of disrupting final-year exams and graduation ceremonies.