Ukrainian Americans in Michigan Plead for Help for Their Loved Ones. NATO and Sanctions Are No Salvation

Protesters in Detroit, demonstrating in solidarity with Ukraine, call for harsher sanctions on Russia. But neither Western sanctions nor NATO military action are a way out of the crisis for the Ukrainian masses. 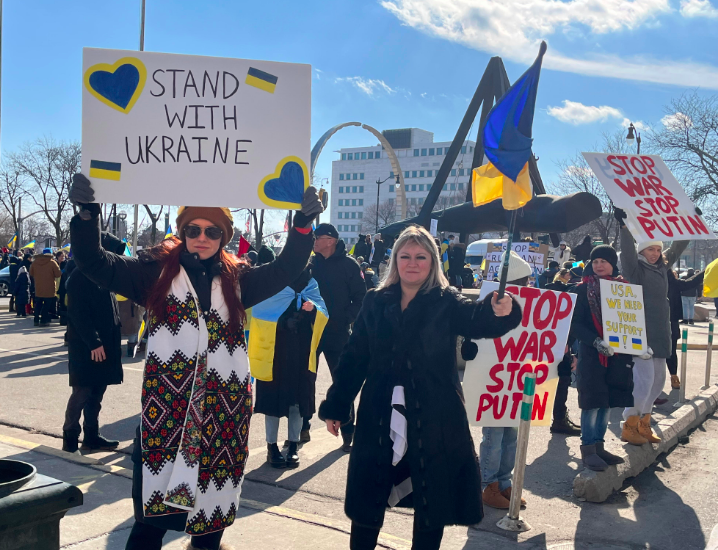 Protesters in Detroit, demonstrating in solidarity with Ukraine, call for harsher sanctions on Russia. But neither Western sanctions nor NATO military action are a way out of the crisis for the Ukrainian masses.

Several hundred protesters in Detroit filled downtown Hart Plaza on Sunday, February 27, under a sea of blue and yellow Ukrainian flags. Most rally-goers were Ukrainian Americans worried sick about their family and friends back home. Some of those interviewed for this article trembled visibly.

But their demand that the U.S. government and European Union apply the harshest possible sanctions on Russia, and looking to NATO for protection, is terribly misguided. Only an international anti-imperialist, anti-war movement that opposes Russia, NATO, and sanctions offers genuine protection for Ukraines. For the Left, the task of building and mobilizing the latent power of cross-border solidarity of the working class and oppressed is posed.

The large crowd speaks to Michigan’s status as home to 39,000 Ukrainian Americans. There is a large Ukrainian community in the Detroit suburb of Warren, which has an honorary Ukrainian consulate. Its Ukrainian Cultural Center has organized at least two of the local protests since the Russian invasion of Ukraine.

Protesters on Sunday chanted, “Close the Sky!,” demanding countries create no-fly zones targeted at Russia. They sang, “Ukraine is Not Yet Lost,” the national anthem. Passing cars and trucks honked their support.

It was the nearly uniform support among attendees for harsher U.S. and NATO sanctions against Russia that was so striking.

Why sanctions? In many ways, it is a completely understandable response to the Russian invasion of Ukraine, especially by those with family and friends in the country who face immediate peril. Rally-goers characterized sanctions as a quick and effective way to influence the Russian government’s decisions. Even those I spoke with who expressed awareness that sanctions are not altruistic, but reflect U.S./ NATO self-interest, argued that those interests overlap with Ukraine’s at the moment. They feel that theirs is a pragmatic position, and that sanctions will increase the chances of their loved ones’ short-term survival.

Ukrainian Americans want to protect their loved ones at home by any means necessary. If that means taking help from the devil himself, they will. These are the kind of choices that the working class and oppressed routinely have to make because of the absence of working-class leadership that can effectively confront the hegemony of the ruling rich.

Dennis, a 22-year-old from Ukraine who has been living in the United States for about five years, acknowledged that sanctions will hurt “ordinary Russians,” which wasn’t good, but argued:

Ukraine finds itself caught in a vise between the two main camps of competing capitalism: the West, represented by the United States, the European Union, and NATO; and a Russia/China “axis.” Whichever camp prevails, it is the Ukrainian working class that will be subjugated. It’s the desperation and apparent hopelessness of that position that leads many Ukrainian Americans to side with what they see as the lesser evil.

An Urgent Task for the World’s Workers

Despite how far-off the possibility seems, there is only one answer that has a chance at winning true independence for Ukraine. That is for the Ukrainian working class to self-organize and fight for power within their country, with the active solidarity of the working classes of every other nation — including Russia and the United States.

At present, though, there is no left force in Ukraine, the United States, or Russia with independent, class-based, anti-imperialist politics and the political strength and will to mobilize. This is what we must change.

Supporting sanctions against Russia acts counter to the goal of stopping Putin’s invasion. The Ukrainian people need the active solidarity of the Russian working class above all else right now, and punishing them with sanctions does not advance that objective. Sanctions rarely, if ever, achieve the outcomes those who support the Ukrainian masses seek. They don’t change regimes, and they don’t punish the wealthy. They are mostly an effective propaganda tool so the countries imposing them can claim to be “doing something.” Decades of U.S. sanctions on China and Cuba, for example, have done nothing to achieve the regime changes the U.S. ruling class has long sought.

This time will be no different. The Russian working class will be the ones to suffer the most from sanctions. Families and children will go hungry. People will die when medicines and other supplies run out at hospitals.

We saw the inhumanity that resulted when the United States imposed harsh sanctions on Iraq. At the time, even some of those in the U.S. anti-war movement supported sanctions as a “softer” alternative to a ground war. In truth, it’s the difference between being killed slowly from hunger and preventable illness than from bombs and bullets. Neither option is one the Left can support.

Russians have been protesting their government’s action in the streets, at great personal cost, since the invasion began. More of that is needed. We must support them in every way we can, and act in solidarity.

Taking a Stand for Ukraine

We feel the anguish of the Ukrainian people desperate to keep their loved ones safe and resist Putin’s autocratic takeover. Vera Kurta, a 61-year-old worker at the Detroit Medical Center, put it this way: “I feel ashamed that I can not physically help my people. Ukraine is alone now … Putin’s never going to stop in Ukraine. Yesterday …I was standing with a Polish woman and a Palestinian woman and they were crying, saying, ‘We are next.’”

Therein lies the root of the only effective strategy for the working class: international, class-conscious solidarity across borders. As long as the capitalist class is in power, wars of conquest will be continuous, the threat of destruction by nuclear war will hang over our heads, and unhalted climate change will make the earth uninhabitable. There really is no way out except for the gigantic and historic project of world socialist revolution.