Under Capitalism, 42 People Hold Half of the Entire World’s Wealth

A recent Oxfam report declares that 42 people now have more wealth than the poorest 3.7 billion people on earth combined. This alarming statistic demonstrates the extent to which capitalism perpetuates inequality in the interest of the very few. 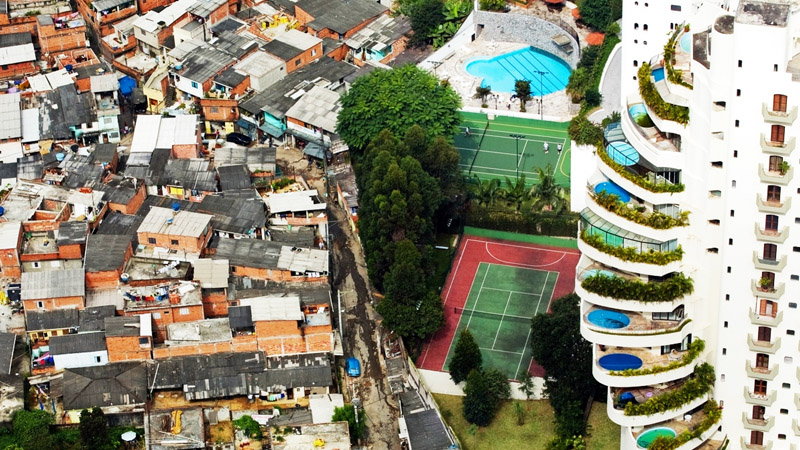 While the World Economic Forum was underway in Davos, Switzerland,Oxfam published a major new report about the growing gap between rich and poor worldwide. The inequality generated year after year by the capitalism is overwhelming: 42 people now possess the same amount of wealth as 3.7 billion poorest. The report also declared that: “the inequality crisis is worsening, 82 percent of the wealth created last year went to the richest one percent of the global population”.

Almost ten years after the collapse of Lehman Brothers, the bourgeoisie and their administrators in government, applied various austerity measures, including layoffs, cuts to social services, bailouts to the corporations, etc. Workers haves suffered a deterioration in their living conditions in most of the world, while, last year, the world’s billionaires made over $462 billion in profits — an amount which “enough to end extreme poverty seven times over.”

How can only a few people be so wealthy? How do they maintain that wealth? The answer is they are capitalists and it is in their interests to keep the wages of workers as low as possible and millions unemployed. The capitalist system is made for exists for extreme wealth in the face of extreme poverty.

In United States, a CEO will earn in just one day the same amount as the average worker will make in a year. The report also reveals that the three wealthiest Americans have the same wealth as the 160 million poorest people living in the country.

As Marx said: “the executive of the modern state is nothing but a committee for managing the common affairs of the whole bourgeoisie.” They have politicians who defend their right to exploit people but in differing degrees. In United States, both Republicans and Democrats receive millions in campaign donations from these billionaires. They defend the literal starvation of the world for profits. 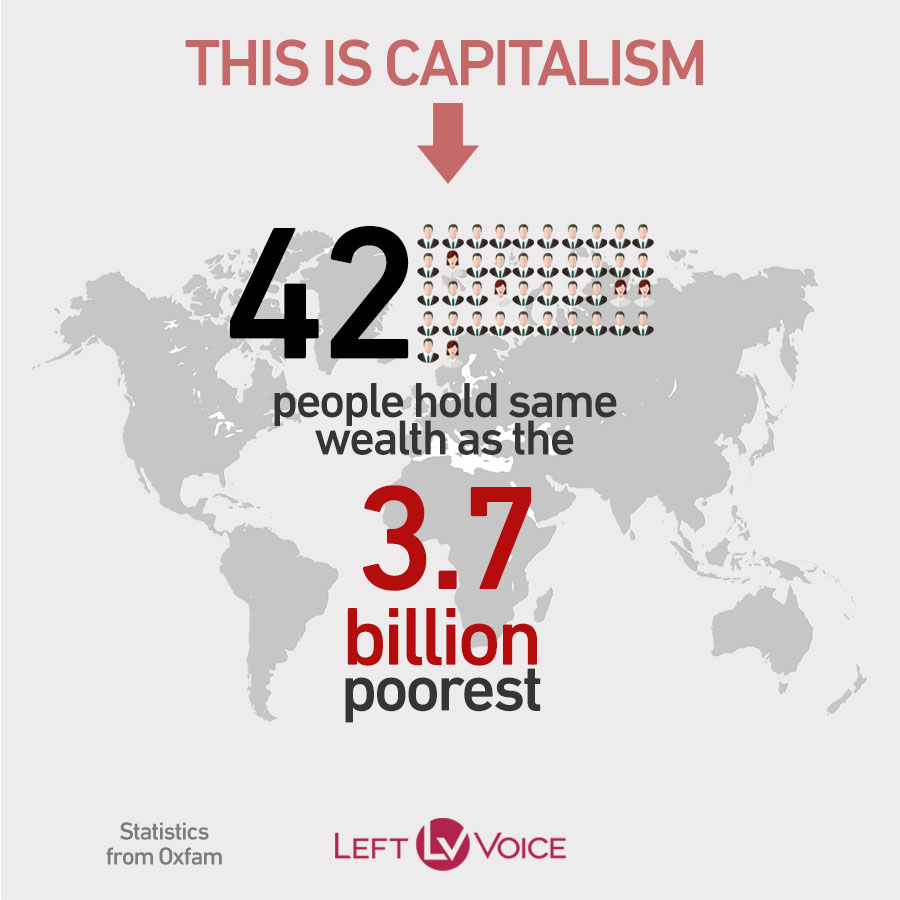 We shouldn’t forget that the Trump Administration has the richest cabinet of American history and it is extremely clear that they rule for the rich. Another example of this is Tax Reform approved by the GOP. Although the Republicans have a base of open bigotry and racism both parties are the parties of the rich. Both parties are controlled by the rich, the wealthiest banks and corporations. They will not defend the working class.

Another point on racism and white privilege: there are many examples around the world in which the lighter and closer to “white” a person’s skin color is, the better treated and more respected the person is. The darker a person’s skin the worse they are treated, the more exploited, brutalized and mistreated in every aspect. For women, disabled people and gender non-conforming people the exploitation, bigotry and brutality are that much worse. Racism is used to keep a sector of workers satisfied and protective of those privileges rather than uniting with their class brothers and sisters.

At the same time, racism distracts from the billions of dollars in wealth amassed by mostly white (but also different colored people). The privileges between a white and Black worker are miniscule in comparison to the privileges the billionaires of the world hold over the vast majority of the population who work just to sustain themselves.

When the working class and oppressed are divided through bigotry and racism, the few “haves” can continue plunder. Consider how immigrants are blamed for for taking jobs when billionaires are hoarding all the wealth. Consider all the lies spread about cutting health care, welfare, or social security because of “tight budgets” and ” security” when there are people who amass billions of dollars dollars in profits themselves.

The Oxfam report pays special attention to the situation facing women. It states “across the world, women consistently earn less than men and are concentrated in the lowest-paid and least secure forms of work”. For example, “women’s participation in the formal labour force is 26% lower than men’s” and “the average gender pay gap is 23%.” 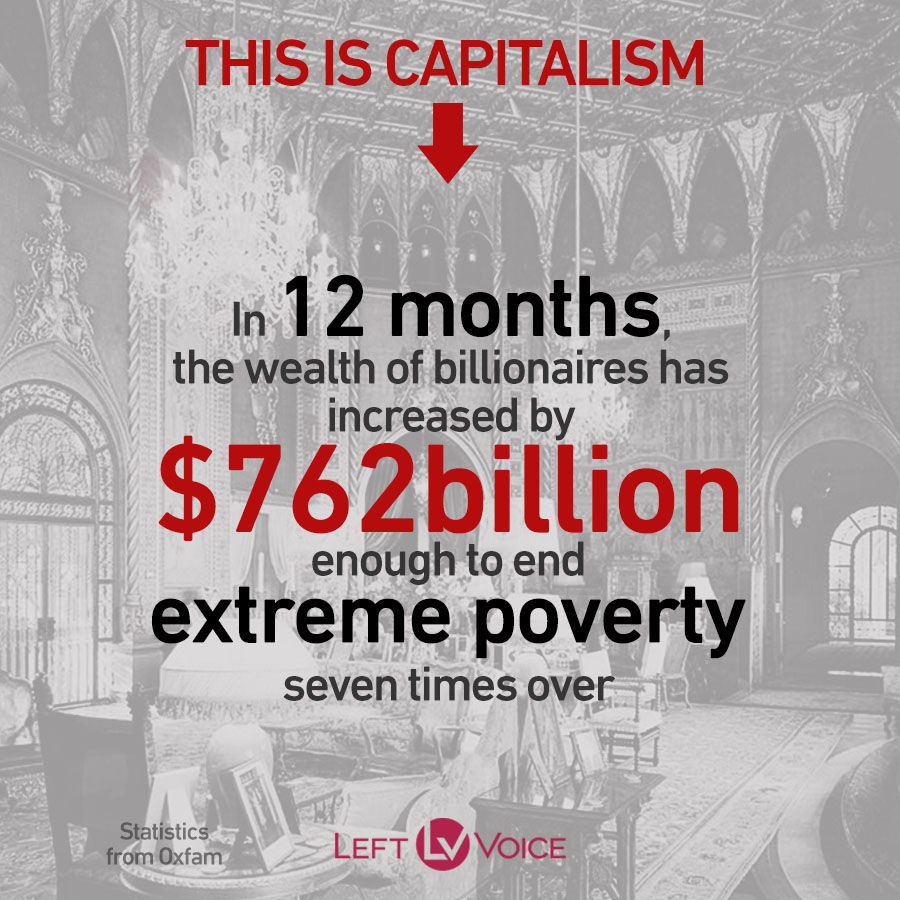 Rich people try to convince us “they deserve their wealth”. But young people around the world have fresh in their minds the bailouts that were offered to the big banks and the austerity that came after for the rest of us. Many of them expect nothing good from capitalism and seeing with new eyes the idea of socialism.

When workers and oppressed people no longer see the capitalist system as capable of defending their rights and reject the efforts by the capitalist political system to placate them the system becomes violent. And when these 42 billionaires see their wealth as being threatened by strikes, demonstrations and popular uprisings, they instruct their institutions and their armed thugs — the courts, the security apparatuses, and police — to beat, jail, censor and even kill.

This is why we fight for socialism and that combative struggle for socialism must be organized. The capitalists will defend their massive wealth to the penny and we must continue to prepare to fight them. The obscene wealth in the face of worldwide poverty is completely unacceptable. The socialist perspective is not to focus on an individual’s property such as a car but that no group has a right to the wealth of billions. The wealth produced by working class should be controlled by humanity: internationally and commonly.

The Oxfam report has an important limitation: it aims to end inequality without questioning the class relationships that are key to this system — a system that imposes exploitation and oppression on the majority of population in favor of the interests of a tiny few.

There can be no doubt that the objective of the working class needs to be to take back the wealth that we produce. That the billions of dollars capitalists have amassed is from our own labor. There can be no compromise with capitalism only a fight to overturn it. As Rosa Luxemburg said, we fight for “a world where we can be socially equal, humanly different and totally free”. We must unite the billions of us at the bottom to challenge and eliminate the wealthiest at the top.

From the late Ursala Le Guin “We live in capitalism. Its power seems inescapable. So did the divine right of kings. Any human power can be resisted and changed by human beings.” For and with the sake of humanity fight for socialism.