RAs at Barnard are joining a wave of undergraduate workers organizing across the country. They’re demanding better compensation, a manageable work schedule, and better communication from the administration. 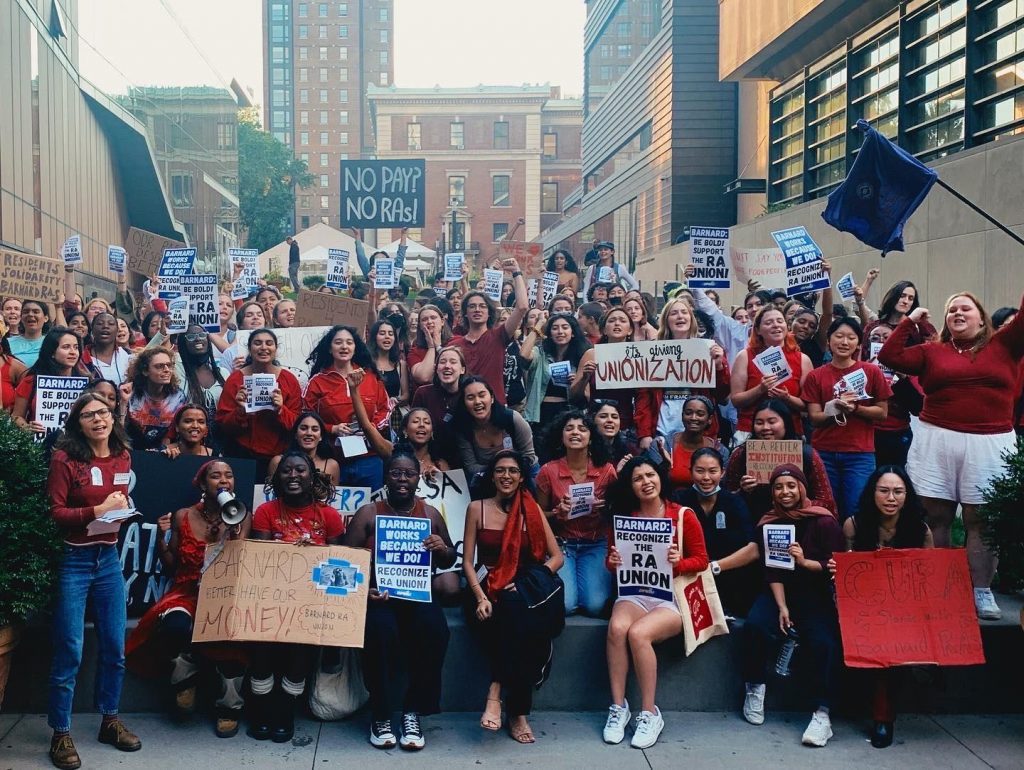 “TICK TOCK BEILOCK!” On Friday, October 7, chants echoed through the Barnard campus, reverberating off of the college’s historic buildings as the Resident Assistants (RAs) rallied outside of the College President Sian Beilock’s office, demanding that she and her administration voluntarily recognize the Barnard RA Union. In a powerful and historic demonstration of strength and solidarity, over 200 RAs, students, and supporters marched across campus to make their demands heard. The action marked the fifth day since the RA union had marched to President Beilock’s office to hand-deliver a petition signed by 95 percent of RAs announcing their intent to unionize with OPEIU Local 153.

The Barnard RAs are the latest to join a growing wave of undergraduate workers who are unionizing. On college campuses across the country, RAs are typically underpaid and unsupported, expected to put in inordinate on-duty hours while also providing first-responder mental health support to their peers, conducting room inspections, holding one-on-one sessions with their residents, creating bulletin boards and other floor decor, as well as designing, coordinating, and facilitating community-building events. This is all on top of an already grueling academic schedule, extra-curricular activities, internships, and, in many cases, additional part-time jobs.

Despite the long hours RAs are expected to work, they are not paid. Rather, the college offers housing and a meal plan as compensation for this 24/7 job. Worse yet, their financial aid is often negatively affected by this so-called compensation.

“I was told my financial situation would be better if I became an RA because my grant would increase to cover more of my tuition bill,” read an anonymous RA quote that was posted on the Barnard RA Union’s instagram. “My financial situation surprisingly became worse after I became an RA. Financial aid adjusted my grant to cover less than what I was getting as a non-RA student. This is a problem that so many other RAs face. So we are working more and losing money? It doesn’t help that there’s no transparency and our jobs are constantly threatened when we try to fight for any right or accommodation.”

What’s more, the Fall 2022 Barnard RA job description stated that RAs “must not exceed a total of 20 hours per week,” and that they may only work additional hours if approved by a supervisor. However, RAs report that this is unrealistic given the extensive requirements of the job, and all RAs end up working many additional hours each week — hours that they deserve to be paid for.

The Barnard RAs have three main priorities as they forge ahead in their fight to be recognized as workers and win their union: more comprehensive compensation through wages or stipends, managing time spent on RA duties, and better communication from the college on RA expectations and job duties.

Maya Darville, a first-year Barnard RA, spoke at the October 7 rally. In her speech, she described how her love of mentorship and community is what drew her to residence life. “Barnard Reslife has taken advantage of my passion and the passions of my peers and put us in a position to work nonstop as therapists, as administrators, as health liaisons, and so, so much more,” she said. “Most of us are working class, and many of us are people of color. We shouldn’t have to lose our dignity to afford school.”

Darville’s sentiments about the harsh labor conditions of the RA job exacerbating hardships, especially for students of color and FLI (first generation and/or limited income) students, are echoed by her peers. In a letter detailing her nightmarish experience as an RA when she contracted COVID and why she ultimately chose to resign, former RA and current student Aisha Mann said, “Barnard Reslife is not an easy place for students who come from underrepresented backgrounds because they constantly have to overwork themselves under bad management and in return are treated with no empathy or basic respect.” You can read the full account of her experience on the Barnard RA Instagram.

Despite the union having a supermajority of RA support, and despite the college administrators receiving over 800 emails urging them to grant voluntary recognition, on Thursday, October 13, the college refused to voluntarily recognize the RA union.

While the administration continues to disappoint and demonstrate their disregard for the humanity and rights of their student workers, the Barnard RAs, fueled by their collective momentum and unwavering support for one another, know that this is just the beginning. “It may take longer to end up at the bargaining table, but we will spend this time preparing for that very moment,” they said in a statement on their Instagram. “Barnard has once again proved that they do not care for their student workers, yet we will continue to fight for the labor rights we know we deserve.”

Undeterred, the Barnard RAs filed for a union election with the National Labor Relations Board (NLRB) the very next day.

Meanwhile, Barnard College has ramped up the union-busting antics. Over the weekend following their NLRB election petition, Barnard launched a page on their college website addressing the RA union. It includes thinly-veiled threats, suggesting that if the RAs win their union, they may lose benefits such as sick leave or mental health days.

The RAs were quick to call this out for what it is: blatant anti-union propaganda and intimidation. In an Instagram post with the title slide reading “Barnard puts the ‘B’ in Bust,” the “B” cleverly recognizable as the Barnard logo, they posted screenshotted images of the site, annotated with handwritten notes calling out the points of contradiction and blatant lies with good-humored quips. The first of these shows a section titled “Our Values,” where the RAs have struck out the word “Values” and scribbled in the word “IMAGE” in red ink and all caps — a stark illustration of where the college has proved time and again its priorities lie.

For the Barnard College administration, union-busting is nothing new. According to the NLRB, the College currently has over 50 unfair labor practice charges (for comparison, Amazon has 222). At least one of the insidious forces behind these violations of workers’ rights can be attributed to none other than the infamous anti-union and anti-abortion law firm Jackson Lewis. Contrary to Barnard College’s self-proclaimed progressive values, Rachel Muñoz, Barnard’s Associate General Counsel, hails from the conservative firm. By hiring Jackson Lewis, Barnard has both made their own claims that they are “not anti-union” laughable and dug themselves their own hypocritical hole as a historically women’s college that has worked to build itself a reputation for being pro-choice and has recently proclaimed that it will offer abortion pills for students as early as next year.

With mounting concerns that the Barnard administration and Jackson Lewis will try to delay the NLRB election, the Barnard RAs ask that supporters call the Office of General Council at (212) 853-7825 and email Rachel Muñoz at [email protected] to express support for the RA Union and demand that they cease union-busting immediately and allow for a fair election.

As the RAs boldly gear up for the fight to win their union and a fair contract, they are unwavering in their faith in the collective and their ability to shift the power dynamics in their school to have a say in the working conditions that affect the lives and wellbeing of themselves and their peers. As Darville said in her rally speech: “We are diligent workers and we deserve legal protections and representation. This is why we’re unionizing.” The fight has just begun.