As unemployment soars, the working class is heading toward an economic disaster like none seen before. Such unprecedented times call for unprecedented actions. 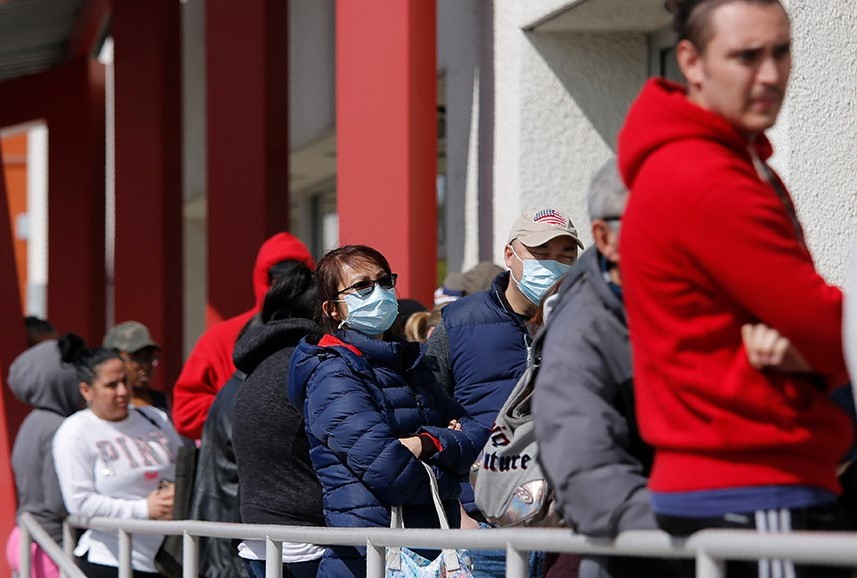 People wait in line for help with unemployment benefits at the One-Stop Career Center in Las Vegas. | John Locher/AP Photo

The latest numbers are out and it looks like the rate of new unemployment claims in the United States has now doubled. A week ago we learned that unemployment claims had gone up 3.3 million in one week. New numbers released today show that 6.6 million new unemployment claims were filed last week as well, for a total of almost ten million in just 14 days. Meanwhile, reports are coming in from states across the country of impossibly long waits and unemployment websites crashing because so many people are applying all at once. While these numbers only include those who have applied for unemployment compensation—and do not include the likely millions of undocumented workers who have lost jobs but are not eligible for unemployment—they nonetheless offer a clear indication that the rate of job losses has increased exponentially since the beginning of the Coronavirus pandemic. And these figures are not just large, they are astounding! In fact, they represent the biggest, and most aggressive job losses ever seen in the U.S. since the Great Depression. For some comparison, the United States lost a total of 12 million jobs between 1930-1932. We’ve likely lost at least that many in just two weeks. It’s clear that unless something is done, the economic repercussions of this crisis will be huge and they are going to hit working people the hardest. This time we cannot let the capitalists off the hook.

While it’s tempting to look at these numbers as mere facts of nature (closed factories and shops naturally lead to higher unemployment, right?), such easy platitudes, as any Marxist will tell you, mask a much deeper and insidious system of exploitation. For most employers, labor is just another commodity to be bought and sold without regard to human need or suffering. When times are good, capital makes profits by exploiting the labor of working people; and when times are tough, in moments of crisis, they are able to cut costs and save money by tossing those same workers to the curb. In no society prior to capitalism has such a general disregard for the right to participate in shared production ever been so blatant and so widely accepted. But this is no mere accident, of course: it is by design. By keeping working people precarious, by pretending they are free laborers, willingly engaged in the sale of their time and energy, by removing any stability or guarantee of the basic essentials for a decent life; capitalism ensures that there is always what Marx called a vast reserve army of labor, willing to work harder for less. And of course this is also how capital divides the working class. By creating a huge underclass of desperate and angry workers, resentful of those lucky enough to have a decent or stable job, and a whole group of employed workers terrified of becoming unemployed, owners can manage not only to drive down wages and increase production, but can more easily undercut collective struggles and strikes. In other words, no matter what, under capitalism capital wins and working people lose.

But there is no reason why we must live this way or accept these conditions. The money to pay workers is there. The resources to weather this crisis are sufficient for everyone except the most essential workers to remain home to defeat this virus, and the need for production of essential materials and goods is sufficient to provide working hours for everyone who needs work. This is why Leon Trotsky, in 1939, when the world was on the verge of a different global crisis, proposed the equal distribution of working hours among all workers unemployed or not, with no loss in wages and automatic increases equal to inflation. Such a reform would solve the unemployment crisis. If capitalism is not willing or able to take these basic steps to provide for the basic standards of  life for the very people who make the world run, well, it does not deserve to survive this crisis.

The weeks and months ahead of us, particularly in the United States, are almost certainly going to be bad and those who think we will return to business as usual are fooling themselves. The chance to stop this virus from spreading further has passed and even conservative estimates are suggesting that we could see upwards of 200,000 deaths in the U.S. alone. These deaths are an unmitigated catastrophe (the result of criminal neglect on the part of government and industry leaders), but the economic fallout that is sure to follow is going to be unprecedented. The time is urgent for those workers still employed to use their leverage now (within their workplaces and their unions) to force employers to pay those who are not working or not able to work, and to demand that all non-essential production be converted to production of essential goods and services necessary to address the crisis. Likewise, committees of the unemployed must form in order to coordinate demands for work and relief and to foster coordination between those outside of their workplaces and those still employed. Only by coming together and defending the needs of the class as a whole will we be able to avoid the Armageddon that we are quickly riding toward.