Union Density Is Down, but Class Struggle Is on the Rise

The Bureau of Labor Statistics released a report this week showing that union density is down in the United States for 2019. In light of the rise in combative labor struggles across industries over the last several years, what does this trend mean for the labor movement? 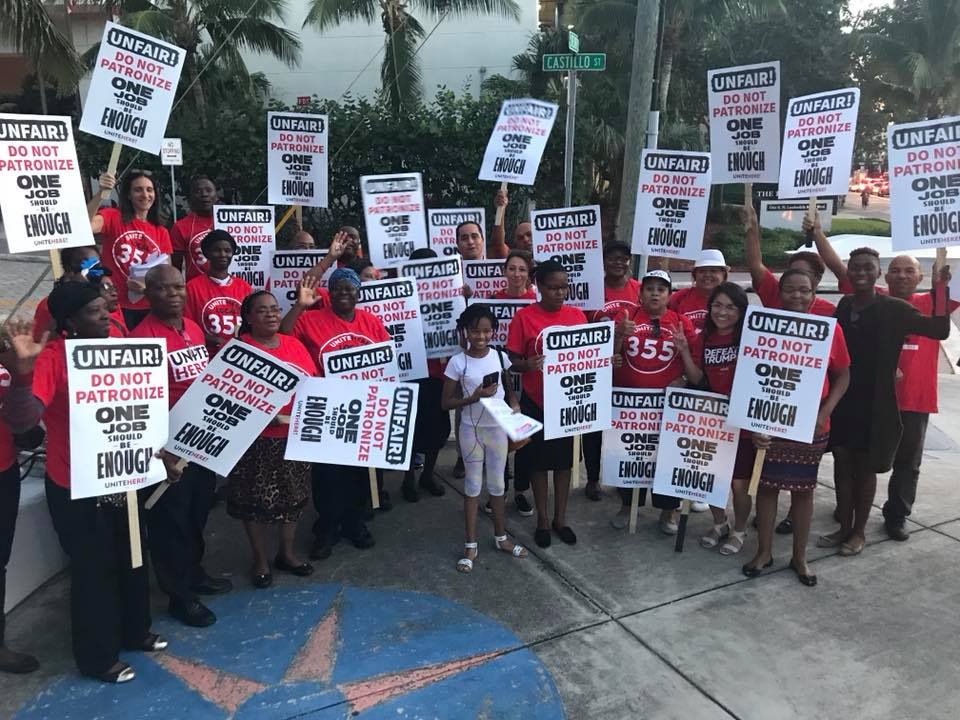 This week, the Bureau of Labor Statistics (BLS) released a report on union membership for 2019. The numbers paint a rather grim picture of the state of unionization in the country, but the data is only one part of the story. Though union density is down, union militancy is still on the rise. From the teachers’ rebellions in the South and the West, to the country-wide hotel workers’ stoppages, the 31,000 striking Stop & Shop workers, the 40 day General Motors strike, and dozens of other struggles of various sizes, 2019 marked yet another watershed moment for American labor.

Looking at 60,000 households through the Current Population Survey, the Bureau of Labor Statistics (BLS) found that the union membership rate for 2019 was 10.3% of the workforce, which is around 14.6 million unionized workers. A further 1.8 million workers are “free-riders” represented by union contracts but who are not members of the unions. From 2018 to 2019, the absolute number of union workers remained approximately the same, but the percentage dropped 0.2%. It is likely that this reflects nonunion job growth above unionization, not widespread union decertification or members opting out of unions a la the Janus decision that was feared to break public sector unions.

The report also shows that the gap between men and women in unions is narrowing, and that Black workers remain more likely to be in a union than workers of other races, at 11.2% unionization; however, this trend is complicated by the fact that unionization of Black workers dropped by 1.3%. Union rates are also higher for older workers between the ages of 45 and 64.

By industry, “protective service occupations” which includes police, correctional officers, and firefighters, are the most highly unionized at 33.8%. Utilities and logistical industries have high density in the private sector, while unionization in food service, finance, and insurance all remain below 2%.

More than half of union members live in seven states: California, New York, Illinois, Pennsylvania, New Jersey, Ohio, and Washington. The South, unsurprisingly, has a low union membership rate, but there were gains in states like Florida and Missouri.

Remarkably, union approval, according to a Gallup poll, has reached a 50 year high, at 64%.

What does this mean for the labor movement?

At a cursory glance, there are 16.4 million workers represented by union contracts, and they are organized in key strategic industries. To improve unionization in 2020, unions could hypothetically leverage the strength in industries such as utilities, transportation, and telecommunications to organize the less union dense industries that require logistical linkages within the supply chains.

Furthermore, the 10.3% membership rate obscures strategic geographic regions, such as the New York metropolitan area, which is an economic powerhouse for the country and also over a quarter unionized. The numbers might have dropped overall, but union workers are still a potential force in vital sectors and locations.

By proportion to the population, Black workers are an important component of membership numbers, and unions are in a unique position to truly take up the fight against Black oppression, should they want to. That struggle would require combatting the police and correctional officers’ cartels that protect killer cops, profit from mass incarceration, and otherwise defend the racist US regime. Against the heavily unionized “protective service occupations” sector, “No Cops in Our Unions” remains the slogan and “Strike Against Police Terror” remains the weapon.

In the mostly nonunion South, there has been some growth, and though the UAW and other unions have lost high-profile elections in southern manufacturing, unionizing the South is not a lost cause. The Southern economy is growing and industrializing too, and with increasing approval for unions, the losing streak could be turned around.

485,000 workers downed tools in 20 major work stoppages in 2018, the highest number of workers involved since 1986. BLS has not released the report for 2019, but teachers’ strikes in LA, Denver, Oakland, and Chicago, and private sector strikes at Stop & Shop and GM as well as lesser known but nevertheless militant pickets at Mack Truck, Wabtec, and General Mills demonstrate that the upturn in US labor struggle continues. But, like all social phenomena, unionization and class struggle are not linear; they occur in waves. The labor movement of the 30s and 40s and the wildcat strikes of the 70s were not slow-moving things, but explosions that reached new heights and established structures in struggle. 2018 and 2019 are just transitional years between decades of an employers’ offensive and a two-sided class war that is beginning to open up.