Union members from the Minneapolis area successfully expelled the National Gaurd from the St. Paul Labor Center. This action is a critical demonstration of solidarity between labor and the fight against police brutality. 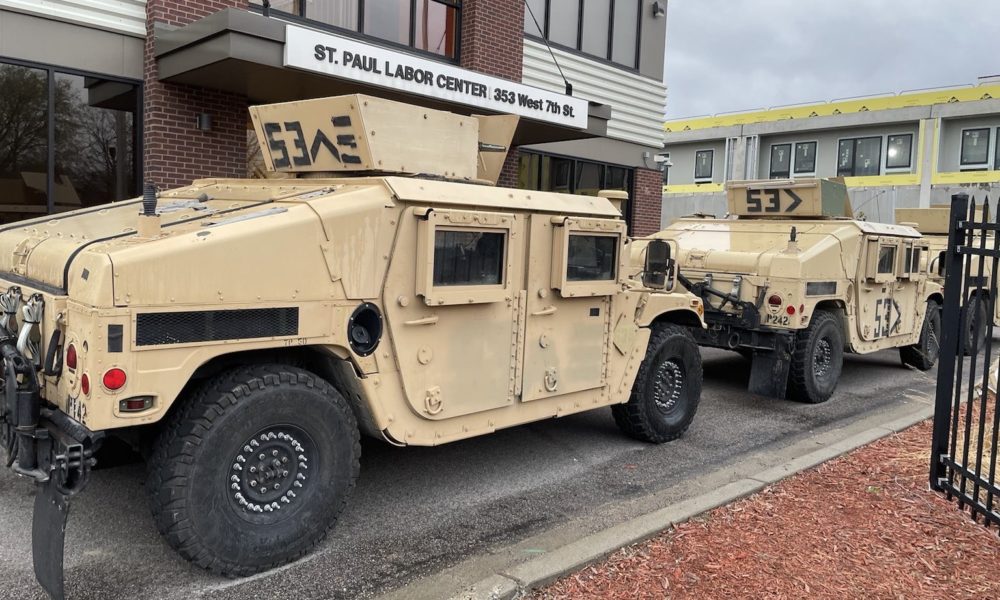 Following several union meetings on Wednesday night, I was made aware that a National Guard unit was occupying the St. Paul Labor Center in downtown St. Paul, Minnesota. Other union members and I were sharply aware of the National Guard’s role in repressing protests during the trial of Derek Chauvin and the recent killing of Daunte Wright, and we concluded immediately that our union hall had no place in those militarized efforts against the Black community, activists, and working class people.

Rank and file union members, community activists, and various union staff members assembled at the Labor Center Wednesday night and found more than 15 armored vehicles, and 50 National Guard troops had been given the keys to the central union facility. Workers from CWA, MNA, UBC and other locals informed the soldiers that union members support the communities harmed by police violence and racism and that the Labor Center was off limits to armed forces participating in repressing protests across the Twin Cities.

Minnesota political circles had already militarized the metropolitan area as the trial of former Minneapolis police officer Dereck Chauvin reached its second week. Across Minneapolis and St. Paul, police agencies and the National Guard held street corners and strategic intersections in preparation for renewed civil unrest. The police presence increased further after the murder of Daunte Wright in Brooklyn Center, a town located immediately outside of Minneapolis.

Breaking the imposed curfew, union members assembled at the hall Wednesday night and demanded the immediate exit of the troops. Initial conversations with the National Guard and police revealed that a member of the Labor Federation had given them the key to the hall. After union members made a series of phone calls to the individual, he arrived at the scene and entered into conversation with the troops stationed inside the union hall.

Workers spoke with Guard members, expressing understanding of the soldiers’ working class background and orders, but imploring them to break ranks and join the anti-racist movement sparked by the murders of Black people by the police.

Within a short time, all members of the National Guard began packing their belongings and exiting the building, with the labor podcast “We Do The Work” streaming live video from the action on its Facebook page. Within one hour, the armored vehicles were loaded with all of the soldiers and exited the ground of the Labor Center. The collective effort and demands of union members compelled the exit of the National Guard.

The action of union members against the National Guard’s repression of the Black Lives Matter movement demonstrates that organized labor is a critical and powerful force and must side with working class people rising up against systemic racism, not on the side of police repression. The united force of working class people, organized and acting on our power, can not only turn the tide in specific protests; it could transform our world. That power has to be reclaimed and wielded by rank and file union members today. Once we do that, no politician, CEO or military in the world will be able to stop us.