With the teachers’ strike in Minneapolis in its third week, we need working class solidarity more than ever. 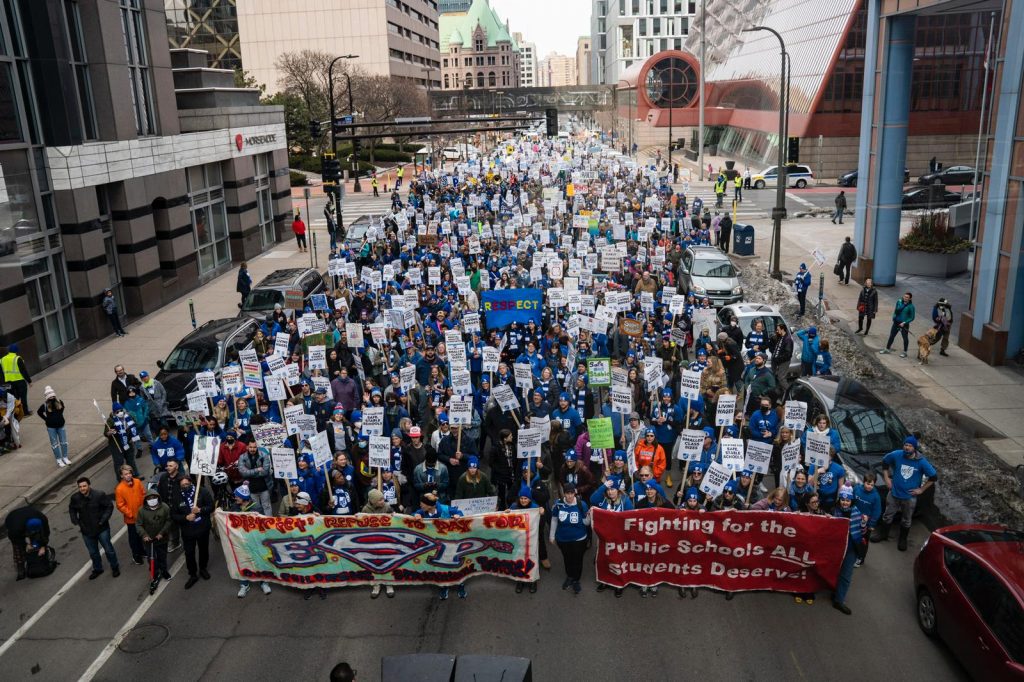 Teachers in Minneapolis have entered the third week of their strike. During their struggle, teachers have braved the snow and the rain, but on March 25, they face a greater challenge: their first reduced paycheck. More than ever, it is time for national solidarity to help the Minnesota Federation of Teachers to win their fight. We need a national mobilization of workers from all sectors to expand the fight in defense of public education and especially, active solidarity from educators nationally. A victory in Minneapolis sets an important precedent for future educators’ struggles.

On March 8, the president of the American Federation of Teachers, Randi Weingarten, spoke to Minneapolis educators on the picket line. “You are the front line right now,” she told them. She went on to announce that the AFT would give $100,000 toward the strike fund, adding that, “this is how one utilizes the power of solidarity.”

While some teachers and staff expressed gratitude for the national support, they know it is not enough.  The AFT brings in hundreds of  millions of dollars in revenue each year, with money dedicated to fighting struggles like this one. Their current contribution works out to about $30.00 per teacher, and if you figure in the Education Support Professionals who are central to this fight that money gets stretched even further. That is unacceptable.

The AFT must do much more to support and fund the strike in Minneapolis, until teachers and staff are victorious in their fight. Beyond funding the strike, the AFT must call upon its 1.7 million members to participate in solidarity actions nationwide. There should be solidarity actions all over the country—from wearing blue for Minneapolis teachers to street mobilizations.

There is also a responsibility among the larger membership of the AFL-CIO to stand alongside teachers in Minneapolis. On Saturday, a union rally was held by rank-and-file members of AFSCME, ATU, CMTEE, OPEIU, SEIU and others to show support for the teachers’ struggle. This is a crucial step, but the majority of union members and leaders were absent. The AFL-CIO represents more than 12.5 million workers, and with their help teachers in Minneapolis would be virtually unstoppable. We must continue to push for true working-class solidarity across all sectors of labor. An injury to one is an injury to all. And a victory of one sector of the working class can spur other strikes and struggles; just look at the wave of Starbucks unionizations.

Besides, teachers educate the children of the working class. And there is no doubt that schools in Minneapolis are in crisis.The district pays low wages, making it hard to retain teachers and support staff, especially BIPOC educators. Those same BIPOC teachers are the first to be impacted by layoffs. Students are also heavily affected by the crisis. Classes are too big. Support is not available to students who need routine and stability. These problems are not isolated to one city, of course, and the Minneapolis teacher’s strike has great potential to energize teachers throughout the nation who face similar challenges.

Minnesota is surrounded by so-called “right-to-work” states. In Iowa, Senate Bill 2369 seeks to divert public school funds toward a private school voucher system. Margaret Buckton of the Urban Education Network says that this lack of funds could cost them experienced educators. Teachers in Iowa have no right to strike, and can face fines of up to $500 or even jail time for doing so. In North Dakota, SB 2215 was seen by many as an attack on teachers’ voices and their right to collective bargaining. In South Dakota, HB 1216 was introduced this session to ban teachers’ unions outright. In Wisconsin, teachers suffered a huge blow to their collective power in 2011 under Act 10.

A victory in Minneapolis would be a crucial step in a region where teachers are overworked and underpaid.

This strike is a continuation of the Minneapolis Teachers’ Strike of 1970 and of the Hortonville, Wisconsin Teachers’ strike of 1974. And the most recent teacher’s strike wave in 2018 and 2019 in . It is also deeply connected to the uprising in Minneapolis after the murder of George Floyd at the hands of the police. The AFT and all friends of labor must take this opportunity to stand up, and to show that we will stand firm in solidarity with teachers, in Minneapolis and beyond.