Unions Must Fight for Disabled Workers

Disabled workers face much discrimination in the workforce. Unions must fight ableism at every turn in order to protect all workers. 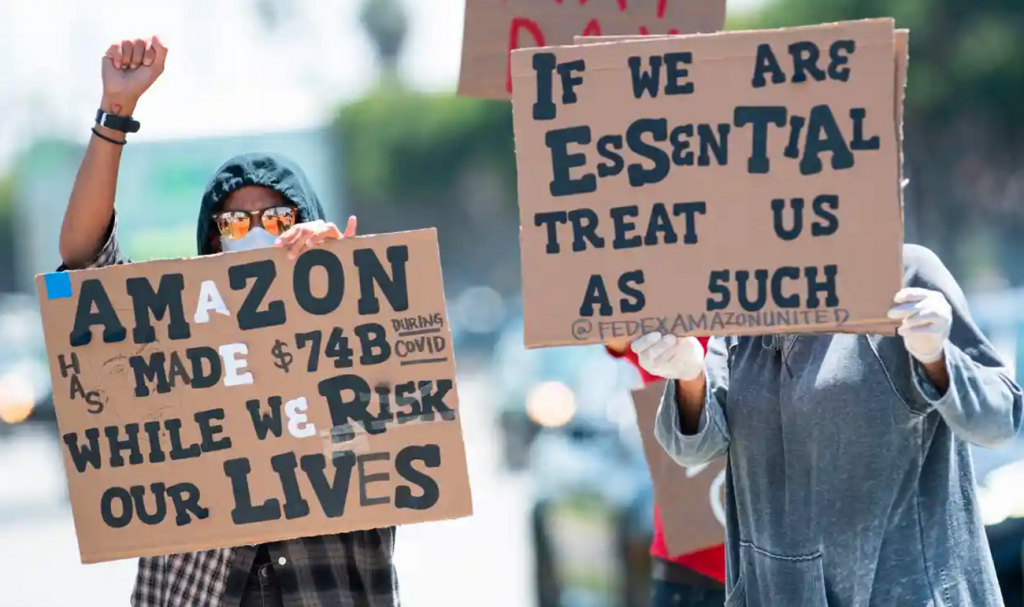 Workers protest in Hawthorne, California, on 1 May. Photograph: Valérie Macon/AFP via Getty Images

In recent years, workers in the United States have gained new insights through their experience of the pandemic and through participating in the Justice for George Floyd movement. As a result, they have become increasingly conscious of how different modes of oppression are linked to one another under capitalism, as Ezra Brain recently described in “Social Justice Unionism: How ‘Generation U’ Is Building Class Solidarity.” At Amazon alone, immigrant workers and queer workers have played leading roles as union organizers with an eye toward how a union would protect them as oppressed people. Minnesota teachers and New York City professors have both called for anti-racist measures in their union contracts, and unions across the United States have signed on to statements in support of Palestine. But one axis of oppression that has received less attention in light of unionizing efforts is disability, in part because access barriers frequently keep disabled people out of the workforce. We can see this in practice through the stories of unionizing workers at Amazon.

On April 24, the Amazon Labor Union (ALU) held a rally at Amazon’s Staten Island warehouse complex in support of the workers at warehouse LDJ5, who were preparing to vote on whether to join the union. On that day alone, Left Voice spoke with two different workers who had been suspended by Amazon on account of their disabilities. One former worker, who had used up all of his paid time off while ill, had found another job after he was suspended and now works at a department store. The other, who still works at Amazon, is Joey.

Joey is the interim president of the ALU in Cleveland, and in March, he injured his knee. Even after he received a medical evaluation, Amazon tried to claim that he wasn’t actually injured and refused to grant him accommodations — he would be expected to complete all his regular duties. Joey visited a community clinic that confirmed his injury and provided instructions and documentation for the accommodations he would need at work. At first, Amazon accepted the documentation, but once he began organizing with the union, Amazon “lost” his accommodations and refused to even give him ice during his shift. Frustrated, he told his managers to document his request for accommodations and their denial of them. The next day, when he returned to work to follow up on his paperwork, HR representatives told him he was being suspended for having an “attitude.”

Joey also mentioned the policy against workers listening to music or podcasts during their shifts, even on a single earbud. He specifically spoke on behalf of coworkers with PTSD, who benefit from distraction, but this is not the only reason access to earbuds can be an accessibility issue. All people have sensory needs, one of which is level of stimulation. If there is too much stimulation in an environment, or not enough, a person’s happiness can suffer, as well their cognitive functioning. While autistic people and people with ADHD often have sensory needs outside the neurotypical norm and may benefit from sensory accommodations, Amazon’s long hours of isolated labor in a large, hot, noisy space are unlikely to fit anyone’s needs. It’s no wonder turnover is so high.

Unions can play an important role in supporting disabled workers and making workplaces more accessible. Any disabled person knows that the Americans with Disabilities Act provides only a bare minimum — if that — of accommodations and protections against discrimination. Access to these meager accommodations is hard to come by for the average person: accommodations often require formal diagnosis, which can be incredibly expensive, plus navigating layers upon layers of paperwork and bureaucracy. After all that, your accommodations may still be classified as “unreasonable” and therefore denied. This is true for just about every workplace in the United States, with some variation. A union committed to supporting its disabled members can demand additional protections and accommodations.

The Amazon Labor Union has its roots in a workplace safety walkout organized by Chris Smalls near the start of the pandemic. While a temporary illness is different from a long-term disability, disability activists have long said that the Covid-19 pandemic is and will continue to be a mass-disabling event. So far, there have been over half a billion confirmed cases worldwide, and the true number is undoubtedly much higher. A study from earlier this year estimates that the true number of people in the United States who have been infected is likely double the number suggested by official case counts, and that’s in a country with widespread access to vaccines. From 10 to 30 percent of all those who are infected — even if their infection is mild — exhibit some lingering symptoms and other post-viral health conditions for weeks, months, and in some cases even years after recovering from the initial infection, a condition that has come to be known as Long Covid.

Symptoms of Long Covid may include but are not limited to decreased lung capacity, fatigue, memory problems, brain fog, blood clots, and other circulatory problems, which in more extreme cases can require amputations. In recent weeks, medical professionals have begun noticing a new hepatitis-like illness in children, which many suspect may be linked to previous Covid infection. All these symptoms may impact a person’s job performance, which means workers could risk losing their jobs. A union can fight to protect their jobs and get the accommodations they need.

Unions can also fight to make workplaces more accessible. In 2021 the U.S. Bureau of Labor Statistics estimated that only 19.1 percent of disabled people were employed, compared to 63.7 percent of nondisabled people. Even when we look at the unemployment rate, which only counts people who are looking for work, 10.1 percent of disabled people were unemployed in 2021, compared to only 5.1 percent of nondisabled people. Remote work agreements are one type of accommodation that unions can demand on behalf of their disabled members and are especially valuable for immunocompromised folks and those for whom the Covid-19 vaccines do not work. Protection from Covid-19 infection is also a disability issue, since workplace safety measures of all kinds protect workers from possible disabilities they may develop as a result of dangers in the workplace — not just viruses, but also injuries like burns, breaks, strains, and sprains.

Disabled people are disproportionately unemployed, and many more are not even counted in unemployment statistics because they are shut out of the workforce entirely by ableist policies at both the company and national levels. Unions must fight ableism at every turn, along with every other form of discrimination and oppression. In doing so, they will protect all workers.