Greta Thunberg and other teenage climate activists have issued a call for a worldwide general strike to end fossil fuel extraction. Will union leaders support this important action for the planet? Or will they side once mode with fossil fuel executives? 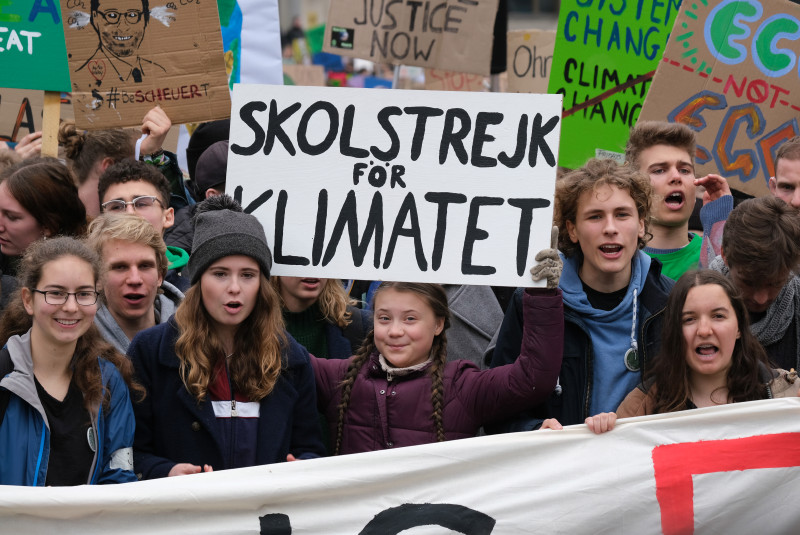 Hurricane season has arrived in the Atlantic and one thing is certain in the era of climate change: a new storm will make its wrath felt. It is not a question of if but when and where. Will the storm hit the Caribbean, like Hurricane Maria, which killed over 5,000 in Puerto Rico? Or will it target a city like Houston, where thousands of homes were wiped out by Hurricane Harvey? Or will it be someplace that, until now, has escaped the heaviest blows of climate change?

We can’t know the answer of course. But we do know that these storms have intensified in recent years and that they will continue to do so, provoking unprecedented levels of destruction across the globe.

However, another sort of storm is brewing in response to the climate crisis. It was first manifested in the demonstrations against the Keystone XL and Dakota Access pipelines. Today, we witness this storm in the form of tens of thousands of teenagers and and young people across the world who have walked out of their classes as part of the Fridays for Future movement.

These young people are demanding action against climate change now—they will not settle for vague promises of fixes by 2050. But more importantly, they are increasingly pointing to capitalism as the culprit. These youth represent a storm because they want nothing less than the immediate end of fossil fuel extraction. They may have just arrived at the one tactic that can bring the capitalist system to a halt—the general strike.

Around six months ago, teenagers and young people across Europe began walking out of their classes. The movement began with Greta Thunberg, a 15-year-old from Sweden who started picketing—alone—outside the country’s parliament last August. Within a few months, Fridays for Future was born. Soon, student walkouts spread across Europe, to Australia, North America, and beyond. Now, these activists have called for a general strike on September 20 around the world.

The calls for a strike signals a growing combativeness within the environmental movement. No longer are environmentalists content with supporting “green” corporations or voting in the lesser of two environmental evils. Increasingly, these young people are taking radical actions to fight back against climate change and those responsible for it. Just last April, more than 1,000 climate activists were arrested for staging civil disobedience actions in London, in which they blocked major sites like Waterloo Bridge, Oxford Circus and Parliament Square.

Unions Absent from the Scene

So far, unions have ignored the call to strike. As the the effects of climate change are being felt around the globe, particularly among working-class, poor and oppressed people, how can it be that the organizations who claim to speak for workers are ignoring this movement?

In the United States, the trade union federation AFL-CIO has vocally opposed even minimal steps against climate change, like the Green New Deal proposed by Alexandria Ocasio Cortez and other Democrats in Congress. A recent letter signed by the United Mine Workers, International Brotherhood of Electrical Workers, United Steelworkers and other unions declared: “We will not stand by and allow threats to our members’ jobs and their families’ standard of living go unanswered.” The letter was retweeted by several Republican members of Congress and was no doubt received enthusiastically by big business.

The AFL-CIO claims to be protecting high-paying jobs. However, its strategy to achieve this objective is to side with multinational fossil fuel corporations like Exxon, TransCanada, and Massey Energy rather than the millions of working-class people—including hundreds of thousands of union members—who will feel the worst effects of global warming, including storms, flooding, droughts and infectious disease.

Moreover, how can we take union leaders’ assertions that they are protecting jobs seriously when they have refused to lift a finger in the face of the widespread layoffs and offshoring of jobs that have taken place over the past several decades? According to the Department of Labor, the number workplace stoppages nationwide has been steadily declining for the past four decades. Where strikes have occured, it has been rank-and-file members — not union leaders — who have organized them, as we saw in the walkouts led by teachers in states like Oklahoma, West Virginia, and Arizona.

Rather than standing with the oil, gas and coal billionaires against new environmental protections, unions should be on the front lines of the fight for a rapid transition to renewable energy, complete with free training and job placement for fossil fuel workers workers in new industries. At the same time, unions should be calling for the reduction of the workday in every sector and the distribution of hours between the employed and unemployed. This is how jobs will be saved — not by siding with fossil fuel executives will continue to pollute our planet until the moment so as long as it is profitable for them.

Will unions respond to the call for a worldwide climate strike? Or will this urgent demand fall on deaf ears?

Youth Activists Know Who is Responsible

Young people like Thunberg understand that time is running out to avoid catastrophic changes to the environment. Moreover, they are gaining an understanding of just who is responsible for the global warming emergency. The new environmental movement is increasingly aware that this is not a crisis for which “all of us” are to blame (a common idea among environmentalists of the past). Neither can this crisis be resolved through individual actions like buying more fuel efficient cars or supporting “green” corporations. No, the rapid trajectory toward chaos can only be reversed by dramatic, mass action targeting those responsible. As one site set up in support of the September 20 strike notes,

A small handful of companies are responsible for the overwhelming majority of greenhouse gas emissions…Putting the blame in any way on individual consumers, who are often economically incentivized into a larger carbon footprint for fear of bankruptcy, only serves to distract us from the real malefactors of climate change – the businesses, and their regulators who have failed to do their jobs.

In the U.S., the new environmental movement is expressed most visibly by the Sunrise Movement, an organization founded in 2017 with the objective of “uniting young people to stop the climate crisis.” Most of Sunrise’s members are under the age of 25. They are witness to an era of global warming, but also of the ravages of capitalism: rising college and household debt, stagnant wages, the increasing cost of college tuition and healthcare. Furthermore, since they were born after the end of the Cold War, they are not easily frightened by the specter of communism. In fact, more than half of young people under the age of 29 have a higher opinion of socialism than capitalism according to polls.

In the more than three decades since global warming became a widely-recognized phenomenon, there has been no serious plan developed by any of the world’s biggest capitalist powers to cut greenhouse gas emissions. The most celebrated agreements—Kyoto and Paris—contained no binding commitments at all and are woefully insufficient to keep warming below tipping points. According to the International Atomic Energy agency, carbon dioxide emissions reached a record high around the world in 2018. There are no signs that emissions will slow meaningfully this year either.

Union members should demand that their leaderships support the call and create a plan of action to build a powerful general strike on September 20. The effects of climate change are being felt around the globe right now—from Iowa, where unprecedented flooding has wiped out entire towns and forced hundreds to flee, to Australia, which is experiencing historic droughts and forest fires. The consequences will only worsen without immediate action to keep fossil fuels in the ground.

As the only organizations working people have, unions must lead this fight. We cannot depend on corporations or their representatives in government to take the necessary actions to stave off the catastrophe. Only those most affected by climate change have the will—and the power—to reverse course.