Unite Our Struggles: All Out for Columbia Student Workers

Student workers at Columbia University have been fighting to win a first contract for almost four years and are once again on strike. In order to win, they will need the support and solidarity of students and faculty across the city and across the country. 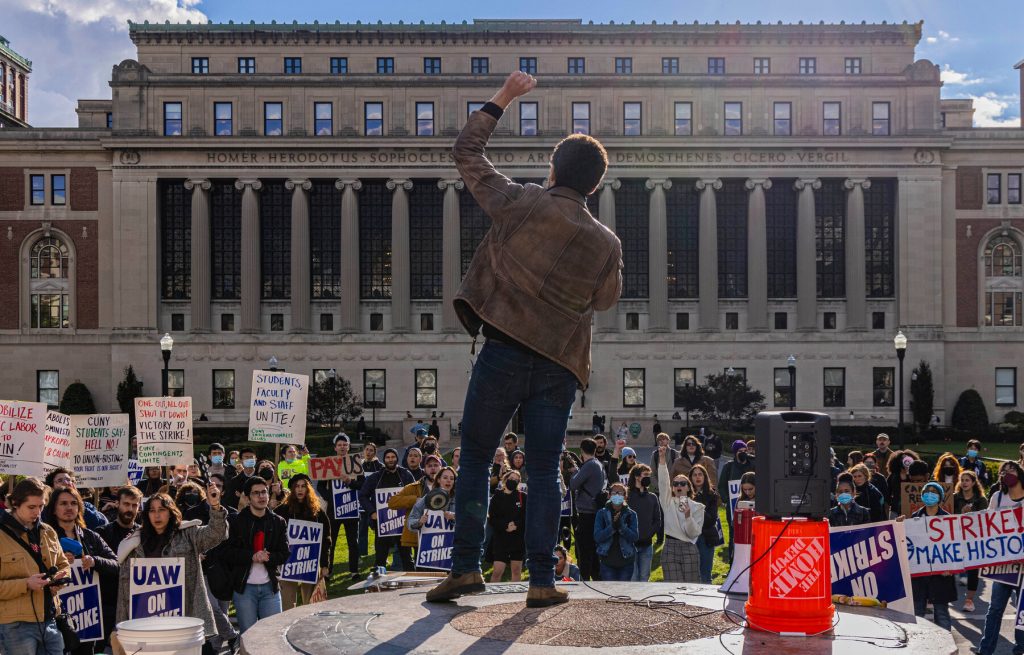 The 3,000 members of the Student Workers of Columbia (SWC-UAW 2110) have been on strike for more than four weeks in an effort to win a first contract. As part of a first agreement, these workers are demanding higher wages consistent with the city’s extraordinarily high cost of living; neutral third party arbitration; and decent healthcare benefits. Although these very basic demands would cost just a tiny fraction of a percent of Columbia’s massive $14 billion endowment, the university has refused to meet any of them. Instead, the administration has continued to stall in order to force these workers to settle for less.

Like other colleges and universities across the country, Columbia relies heavily upon the instructional labor of student workers like those who help teach, grade, and tutor a large portion of the undergraduates who often pay upwards of $60,000 a year to attend the university. And the exploitation of graduate workers at universities like Columbia is part of a much larger decades-long trend towards a multi-tier system of academic labor, which has weakened education unions and led to the impoverishment of a majority of the teaching faculty across the country. Within this context, the struggle at Columbia is a microcosm of the broader struggle of education workers everywhere, and we owe it to ourselves to stand with them in solidarity and in struggle — a victory for these workers would be a victory for all of us.

Because they are so vital to the functioning of the university, these student workers have a significant amount of leverage — especially as end-of-semester grades approach. However, as the last several strikes at Columbia have shown, in order to win this time, they will need to both hold the line until the end of the semester and dramatically broaden the strike by bringing faculty, students, and staff from Columbia and across the city into the struggle.

While the faculty of some departments at the university have issued statements of support for their striking colleagues, this is not enough. Nor is the letter that hundreds of faculty signed in 2018, when the university originally refused to recognize the union. True solidarity means standing with their students on the picket lines. By refusing to teach and bringing their undergraduate students with them out to the picket lines, the full-time faculty of Columbia have the power to significantly shift the balance of forces in this struggle.

Likewise, the undergraduate students at Columbia also have an as yet untapped role to play in this struggle. By organizing solidarity actions with their fellow student workers, such as mass walkouts, shutdowns, demonstrations, and fundraisers for the union’s hardship fund, these students can help the SWC win their first contract and lay the ground for future student and worker struggles. This benefits the undergraduates too: if graduate student teachers have better working conditions, they can provide a better education for their students. At the same time, it is imperative that Columbia University staff refuse to complete any administrative tasks the university deploys to harm the striking workers, and to join in the actions.

The unions representing other Columbia University employees, including SEIU Local 1199, the Transport Workers Union (TWU) Local 241, Columbia Postdoctoral Workers-UAW Local 4100, other Columbia bargaining units affiliated with UAW Local 2110, and other bargaining units that have contracts with Columbia, must also join the pickets until Columbia agrees to a contract that is satisfactory to their student worker colleagues. The university needs to know its treatment of student workers is unacceptable. A united stand against Columbia gives all of the campus unions more leverage to fight for their demands, because cross-union solidarity puts even more pressure on the university, and other unions in the same sectors can then use the Columbia workers’ gains as leverage in their own contract struggles.

As higher education workers, both unionized and un-unionized, we call upon our unions and all education workers across the city to respect the strike, to join the picket lines, and to stand with these workers until their demands are met. Only by uniting our struggles can we win and begin to turn back the decades-long assault on higher education workers and students everywhere. Universities try to pit workers against each other: faculty against students, part time employees against full time employees, and “intellectual labor” against office labor and against manual labor. But despite differences in job responsibilities and working conditions, we are all exploited by the same bosses.

As the SWC workers say, we all have teeth. We must all stand together against the bosses and take back our universities and workplaces.